I saw six movies this past weekend and it was exhilarating. That's a lot for me to suck up these days (though it didn't used to be), unless I'm neck-deep in a film festival. I used to think nothing of a double-bill a day, but this was such a rich and rewarding movie-weekend that it reminded me of the great intensified cinematic forages of my 20s and 30s, when I seemed to encounter, and ravenously gobble down, fresh new masterpieces (heralded or unheralded) for breakfast, lunch and dinner. It also got me thinking about how unimaginably different the experience of finding movies to watch is now from what it was then.

Here's the breakdown: None of the movies I saw were available in my local theaters. I saw all of them at home, on the same 55" screen -- three on Comcast On Demand (two of those in HD widescreen, one in SD widescreen) and three on DVDs (all at 1.33:1) from my own library (in other words, not rentals, Netflix or otherwise). The movies themselves were made between 1947 and 2009, three were originally shot on 35mm film, one on Super 16mm, and the other on HD video. Four of them were in color, two in black and white. Three were serial-killer/corrupt cop thrillers, two comedy-dramas, and one an adaptation of a serious play about religion. None of them was American-made, but three were in English (though sometimes it was hard to tell), two in Japanese and one in Danish. Two were sanctified classics, one a lesser effort by one of cinema's greatest directors, and the other three recent works by established but not particularly well-known British filmmakers. All but one were new to me -- and that one I hadn't seen I booked it in 16mm, as a Seattle premiere, in a university film series 30 years ago.

Surprise! No Rohmer for the past several days. (I'm in the middle of (re-)visiting Comedies and Proverbs right now, with the Tales of the Four Seasons on deck.) As you can see, for movie experiences it was a damn fine weekend for me.

My primary reason for mentioning all this is tangentially related to a recent post about my pal Dennis's consideration of whether to see "Irreversible" ("Irreversible: Will he see it or will he pass?), which is also related to something I wrote about three years ago: "Losing control, or ceding control, or not...." And the point is, simply, this:

When you see a movie today, you are simultaneously choosing not to see thousands of others. So, how do you set your priorities?

Not long ago -- probably within your lifetime -- the average person wishing to watch a movie had two options: check the newspaper to see what was playing in local theaters, or check the newspaper to see what was playing on TV. In either case, the time and place was going to be determined by someone else (that is, the showtimes and the theater location -- you could pretty much choose any 12"-36" cathode-ray TV set you had around, depending on whether it was hooked put to a cable or an antenna).² And the experience was going to be radically different, depending on the venue -- a big, state-of-the-art-equipped downtown movie palace; an old neighborhood second-run theater turned independent art house; a university classroom showing a 16mm nontheatrical print; or a 19" color or b&w TV screen with a 3" mono speaker behind a plastic grille.

You see where I'm going with this, I hope. It is now so easy to see, at any given moment, more movies than most humans have ever had available to them in their entire lives, under an unprecedented range of superior aesthetic/technological conditions, that choosing which particular one to see carries greater weight, greater responsibilities, than ever.

I mean, yes, it is important for any cinephile to see bad movies, because they can broaden your horizons, too -- and if you're observant they can teach you about possibilities, and why some approaches work better than others.

On the other hand, if all you want is to kill some time, and you simply like staring at glowing rectangles, there are plenty of them to look at, including the one(s) in front of you right now. When some people say they "love movies," they simply mean they like to sit in the dark and gaze at a screen. But if you love movies for what they can aspire to, then you also have standards. I, for one, do not get much of a kick out of bad movies, even laughably bad movies. They depress me because they get so little out of a medium I know is capable of so much, and from which I want so much. Gradually, as you age, you begin to realize that your moviegoing opportunities are quite literally numbered. Every movie you see represents another one that you won't -- or something else you don't do. Of course, that has always been true, but it didn't always feel that way... 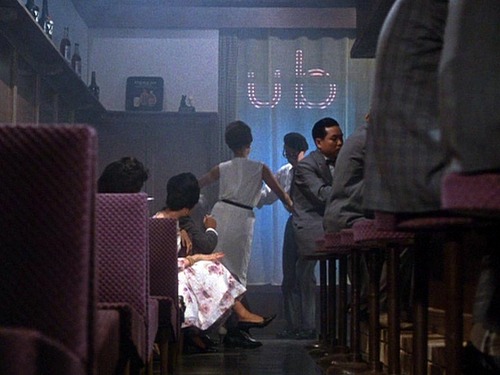 So, what are the odds of getting some real satisfaction from watching a movie -- any movie available -- these days? Is your best shot a matter of going to the local multiplex for some random new release just because it's what's being promoted and reviewed at the moment? Unless somebody I like and respect goes out of their way to tell me I really have to go right now to see what's so special about "Valentine's Day" or "The Wolfman" or "Edge of Darkness" or "From Paris With Love" (Luc Besson! Run away!), then I think not. I'd say I have a much better chance of enriching and enlarging my cinematic experience by catching up with an acknowledged classic that has eluded me (or that I don't remember terribly well) -- or something in current release that, well, I just know I have to see right now (like "Avatar" or -- coming soon -- "Ghost Writer"). I will never regret taking advantage of an opportunity to see even the least effort by a filmmaker whose work I admire (yes, I have seen "What?" -- aka "Roman Polanski's Diary of Forbidden Dreams"); a classical Hollywood pro (Raoul Walsh, Anthony Mann); or even a pantheon director I think is wildly uneven, or who I'm not personally so wild about (Kurosawa, Chaplin)... Yet I deeply resent the butt-torturing agony of sitting through even the trailers for "Nine" and "Old Dogs," especially because I had to do so more than once.

Mood, of course, has a lot to do with it. Sometimes I'm defeated by over-choice because I can't decide which masterpiece I would be most receptive to at the moment. That's why it took me so long to catch up with "Ordet." You don't just pop in a Dreyer movie to pass the time....

I heard somebody on a podcast about horror movies complain that movies aren't good just because they're old. Who, I wondered, said they were? Then he went a little further and said that movies made before he was born had little or nothing to say to him, because he was of a different generation. Except that, well, the first two (James Whale-directed) "Frankenstein" movies were pretty damn great, and the Todd Browning "Dracula" is terrific -- but the rest of the sequels were terrible and Boris Karloff "The Mummy" (1932) was just rotten from the beginning! Just like John Carpenter's original "Halloween" and Wes Craven's "Nightmare on Elm Street" were fantastic, even though most of the sequels were lousy... After a while, I couldn't figure out what this guy was trying to say, beyond the obvious generalization that franchises tend to start off successfully and then (with certain exceptions) offer diminishing returns, which is something every nine-year-old already knows, so I stopped listening.

As for the "before I was born" argument, I feel just the opposite. I find very little in run-of-the-mill contemporary commercial movies that interests me, mainly because they're not trying anything new -- they're just making pale copies of sturdier pictures from the past, even if it's not my past. I'm fascinated by popular culture from the first half of the 20th Century, before I was born -- whether it's Jerome Kern or Betty Boop -- and what adults (in their 20s, 30s and 40s!) were into when I was a kid (like fondue and "mood music"). All other things being equal, I'd rather see any old movie from 1950 than any old movie from 2010 if only because I've never actually been to 1950. I can't ever know 1950 first-hand, but at least I can see what other people saw back in 1950 -- and if the 2010 movie manages to sustain my interest for more than a week or two, I know I can catch it later. (Not true at film festivals, where you often have to make decisions based on what is likely to get, or not get, wider distribution, theatrically or otherwise.)

How about you? Do you ever feel guilty watching some new-ish piece of crap while you know there are so many great movies of the past still left to see? [I mean, once you realize it's crap and there's still a long way to go and you have to decide if you're going to leave or hope for the best and just keep sitting there...] Do today's factory-formulated movies have more to say to you than the old Hollywood studio-factory movies? How so?

Top frame-grab from "Red Riding 1974" (2009). Nightclub frame grab from "The End of Summer" (1961). If you want to know more about the source of the name of this post, read Delmore Schwartz's essential short story, "In Dreams Begin Responsibilities," here.

¹ Yes, I know, I watched the first two "Red Riding" films -- now playing in NY -- out of order, and that was by accident, though it turned out to be interesting since the "1974" and "1983" installments are actually the most closely related. When I first looked at the On Demand menu, I was looking in the HD Movie section, and "1974" wasn't listed, so I went with "1980." Not until later did I find that "1974" was available, but not from the HD menu.

² Remember: Home video did not really take off until the Betamax vs. VHS format battle was decided until the mid-1980s. Only half of American households owned a VCR in 1987. Not until 2006 did DVD player penetration (81%) surpass VCRs (79%).