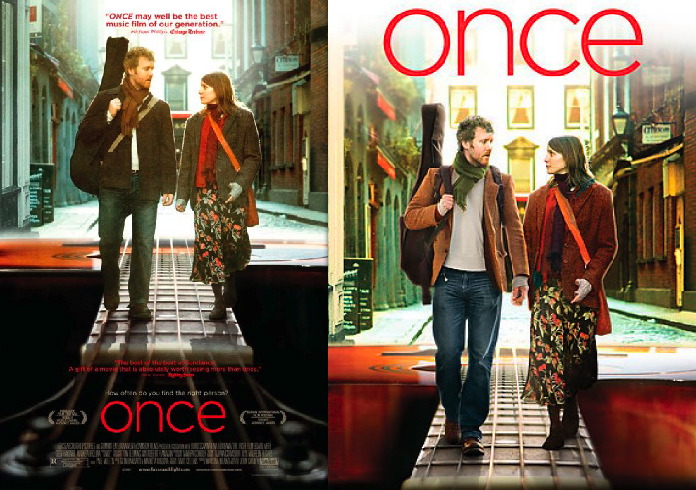 "I put together the DVD cover and the poster originally. And then they took it and f--king bastardized it."

Academy Award-winning Irish songwriter Glen Hansard (the Academy urges us to identify Oscar-nabbers that way for the rest of their lives) speaks out about the lousy/cutesy DVD image manipulation on the cover of the US edition of "Once." (Previous Scanners discussion here.) He's waiting for the Criterion edition. From an interview at Pitchfork:

GH: Oh, man. They f--kin' killed it. You're right. They have us holding hands, which we never do in the film! Those legs aren't mine. Those legs are like three times longer than my legs. It's a completely new body. They literally just used my face. I'm wearing a hat in the original picture, so they Photoshopped my head. If you look at my head, my head looks totally weird, because whoever did the Photoshop job was sh-t. My head looks really weird, they took my hat off, and they gave me an entirely new body. It's completely bizarre.

And they made Mar [co-writer/performer Markéta Irglová] much taller than she really is. You can look at the original cover and then what they did to it and spot all the crappy differences. It's awful. It's a real shame. But at a certain level you've got to let this sh-t go. I designed the original poster and the cover of the DVD myself. Myself and John like to do things ourselves, and I do a bit of design for the Frames. I designed all the Frames album covers. So I put together the DVD cover and the poster originally. And then they took it and f--king bastardized it. Instead of walking down a street, they stuck us walking down a big guitar.

Pitchfork: Again, it's a different world. The music industry is sketchy enough as it is, but the movie industry is 100 times that.

GH: Yeah, it's just blatant. They don't give a f--k. They want you to look at the DVD cover and get everything from that. It's the opposite of what someone like Criterion would do. They create wonderful art. With a Criterion DVD, you just want to buy it for the box. They do it right. With the bigger-time DVDs... they could have done such a nicer job. But I'm just complaining from a design point of view.

In case you've forgotten: Hansard co-wrote the song "Falling Slowly" with his "Once" co-star Markéta Irglová, the two performed it on the Oscar broadcast, and the crowd response to their win was probably the most enthusiastic of the evening. So was Jon Stewart's.