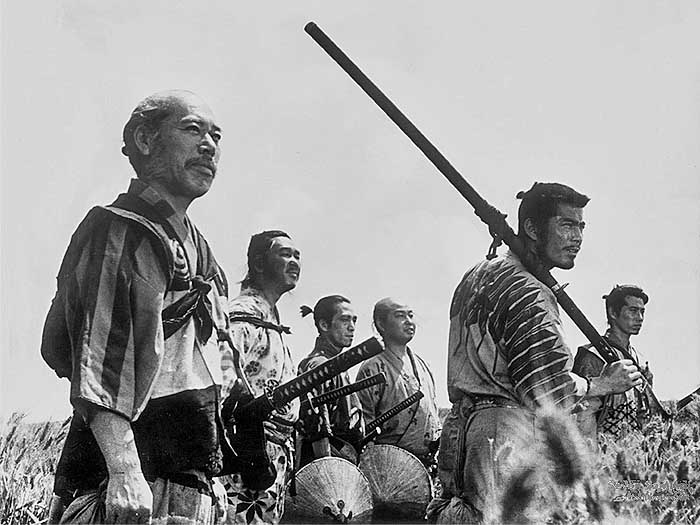 You can't really like this "Seven Samurai" movie, can you? It's old and Japanese!

Here are questions cinephiles and critics still hear all the time: "Why do you like old movies and foreign movies so much? What about new movies? Aren't you just being elitist to say you like movies that are in black and white or have subtitles? Movies are supposed to be fun!" The implicit assumption is that "old movies" are outmoded movies and that new movies (with the latest technologies, unrestricted by old codes regarding sex, violence, drugs and other content) are inclined to be more liberated or superior. Oh, and that "fun" cannot be inspired by anything made before one was born. Not that there's anything inherently inferior about recent, English-language movies, either, but what's wrong with a kiss, boy? (Yes, I quote ol' Monty Python a lot.)

I like to counter this narcissistic question with another proposition: "Think of the new music you've heard that's been issued over the last year. Is more of it "better" than what's been made over the last 100 years? Would it be "elitist" to say that it's more likely you'll find more favorites from the last 99 years than from the last one? Even in purely statistical terms, it just makes sense.

Let's say I'm an even 50 years old. Well, movies themselves have only been around for about 100 years, so I would not be surprised to find that I had at least as many favorites that were made before I was born (1957) as I do that were made since the advent of my existence. Now let's assume that I am turning 30 in 2007. If I say I'm really interested in movies, then it shouldn't seem the least bit unlikely that I've seen more great movies made between 1900 and 1977 than I have between 1977 and now. Especially since so many of them are so easy to see -- whether on basic cable (Turner Classic Movies) or DVD.

I know, I know -- there are people who don't like musical styles of the past, either. They don't like punk or rockabilly or bebop or big band swing or Western swing or blues or Romanticism or Baroque music. And that's their taste, and they're entitled to it. But, if they haven't been sufficiently exposed to these styles, that doesn't mean those tastes are terribly well-rounded tastes. (This is where we could argue about whether some "opinions" carry more weight than others in a debate.) We don't have to like everything, we just need to have enough knowledge and experience to know what it is we don't like.

The question itself seems understandable, if misguided, at first hearing. Until you consider it for about three seconds. And then you see how insulting it really is, because another underlying assumption is: "You can't really like that stuff, can you?"

As Sammy Davis, Jr., one wrote: Yes, I can. (Whether Frank Sinatra says it's OK or not.)

Is Beyonce a greater singer because she's relatively new and young and recorded with the latest technology? Are Aretha Franklin and Edith Piaf and Dinah Washington and Patsy Cline and Martha Reeves and Susannah McCorkle and Billie Holliday and Astrud Gilberto automatically not as good because they recorded a lot of their best stuff earlier -- and some of it was not in English? It just depends on what you like, not on when it was new.

So, why do cinephiles and critics like old movies, and movies from other lands, so much? Maybe for the same reason oenophiles like vintage wines so much: They've stood up over time, and different regions have different styles and distinctive flavors. And maybe because it's part of the definition: Anybody who doesn't consider movies made more than 10 or 20 or 30 years ago has no business calling him/herself a critic or cinephile any more than somebody who dismisses the traditional cuisines of the world could be considered a gourmet. (I've been watching "Top Chef," you see...)