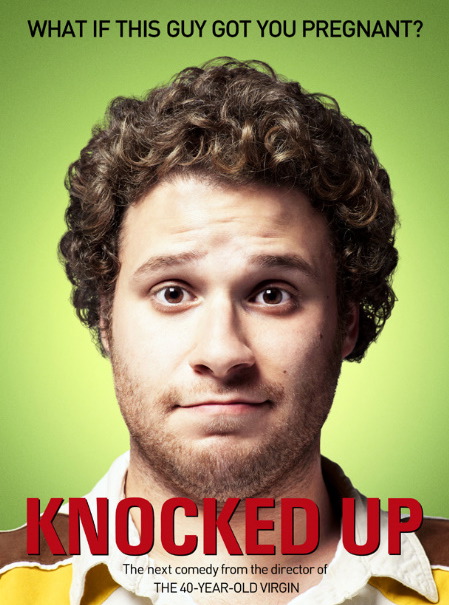 At whom is this ad campaign aimed?

Judd Apatow's "Knocked Up" ought to be the most-discussed (and argument-generating) movie of the year so far — which means it's uncommonly smart and subversive and disturbing (and funny), especially for a summer sex comedy. I happen to think Paul Rudd and Leslie Mann, as Pete and Debbie, the bitter and resentful married couple with kids (Mann is Apatow's wife, and the kids in the movie are theirs) are the funniest characters/actors in the picture (and Kristen Wiig: amazing), mainly because their material, and their performances, are so painfully true that it's not funny. Which is what makes it so funny. It helps that all three are top-flight actors with a gift for uncanny understatement. Sometimes you don't even know if the scene is funny or not (like Debbie's suburban ambush of Pete) — and those are inevitably the most revealing and rewarding kinds of laughs, when you surprise yourself by laughing at how awful and truthful the characters are behaving.

Anyway, I've found that some women don't like the movie, for sex-specific reasons I hope to discuss at length in the near future. Let me offer a few examples now from reviews that I think "get" "Knocked Up" — and not from my usual suspects, either.

One night, Ben [Seth Rogen] goes to a bar, picks up a girl, and goes to bed with her. Both are drunk at the time, and both, in consequence, throw up: Ben the next morning (“I just yakked,” he says winningly over breakfast), and the girl—who is no girl but a young woman named Alison (Katherine Heigl), with a growing career on television—some weeks later, into a trash can at work. Here comes the bit that will divide Apatow’s audience and (he hopes) get them arguing over the movie: Alison decides to inform the father and, little by little, to enfold him and his oafish, froggy grin in the gentle business of parenting. Call it the taming of the Shrek. Most women, I imagine, will scoff with incredulity: this is neither a last hurrah (Alison is still in her twenties) nor the ideal time (she has a good job), and Ben is the last slob on earth she would have chosen. Most men, meanwhile, will be too busy watching through their fingers. To them, this is “The Omen.”

What's interesting about this paragraph is that it's slightly wrong. We go to the bar with the women, not the men. The gals are swept inside (even though Mann's character is really too old to be there), while we catch a glimpse of Ben and his geek buddies near the front of the line. They've probably been standing out there for hours. (This doorman scene will pay off later — though I think it's the weakest in the movie.)

My first reaction to the Ben-Alison match was that she would never want to see him again after their one-night stand. But, like so many women, Alison is someone who falls in love with a guy for who she wants him to be, not for who he really is. (She doesn't even know who he is — and vice-versa.) At the point where she (improbably) lets him back into her life, it's because she now views him as "the father of her child" (which, in her view though not our society's, gives him some marginal rights) and as Pete and Debbie indicate cynically at the breakfast table in front of the kids, men and women who are in love get married and have babies. Or men and women who have babies get married and fall in love. Or something like that. Alison wants to be in love with the father of her child (their child, she insists), so she is determined to make herself believe that's the case, even when it isn't, because that's the way it should be. And maybe she can even make him believe it.

And that is the part Maureen Dowd doesn't quite get. She writes:

Mr. Apatow’s women are smart and confident, but you always know you are on a journey with the men. Ultimately, the men seem happiest without any female contribution — when they’re engrossed in the gross-out world of guydom. It’s like a male version of parthenogenesis.

But Dowd is ignoring the essence of the movie — and the social context described by the title of her own recent book: "Are Men Necessary?" Because it's the women who can choose to have their babies (I'm sorry: our babies) without men, not the other way around. When it comes to pregnancy, men of my generation (and Ben's) are taught — by society and by law — that we had better get used to being unnecessary. ("A Woman Without A Man Is Like A Fish Without A Bicycle.") It's all about respecting the woman's right to do whatever she wants with her own body. It's her body, and there's no question about that. And I'm not saying that's wrong or undesirable. Just that there are... complications. What the movie suggests (and this is where it really starts to get subversive) is that this attitude actually lets men off the moral hook when it comes to questions of abortion and child-rearing. Hey, it's her decision, after all! Yes, both Ben and Pete learn to "grow up" a little by accepting their responsibilities as fathers, but they also know there are lines they can't cross. And, what's more, they're relieved they don't have to because they aren't expected to. Except when (as in "Breaking Up") the woman says she wants him to want to do something he doesn't want to do because, well... because she wants him to want to.

Finally, there's this from Stephanie Zacharek at Salon.com:

But for reasons that aren't, and don't need to be, spelled out, Alison decides to go ahead with the pregnancy. Ben, reluctantly, agrees to do his part — except he has absolutely no idea what his part should be.

It's clear that Apatow doesn't intend "Knocked Up" as a right-to-life tract, and I hope it won't be celebrated -- or decried -- as such. The movie is simply delicate-handed enough to know that neither it nor the Supreme Court can dictate what a woman's choice should be. And it's intuitive enough to know that such a complicated choice can't be easily explained -- at least in terms that will satisfy anyone's politics. [...]

And so Apatow uses an unplanned pregnancy -- a jarring event that's also, perhaps paradoxically, one of the most natural things in the world -- as a device to explore parenthood and the nature of long-term partnership. "Knocked Up" isn't at all precious about either: At first, Alison isn't even so sure she likes Ben. And when she invites him to dinner to break the news (they haven't seen each other since the awful morning after that fateful night), he reacts just like the immature stoner bonehead she believes he is. "I assumed you were wearing a patch -- or a dental dam," he sputters, cruelly suggesting that after all, it's the woman's responsibility to take care of such things. He doesn't even have to know the right words for them.

But Ben is at heart a sweet guy, and he and Alison tentatively move toward common ground, making the kind of connection that could turn into love. They also fight, in ways that bring out the worst in each of them: Alison is impatient, demanding and judgmental; Ben is a little boy who's reluctant to grow up. The male-female arguments in "Knocked Up" are sometimes so vicious, so indicative of suppressed toxicity, that they're painful to watch. At one point Debbie advises Alison on how to gain the upper hand with a partner: "You criticize them a lot until they get so down on themselves they're forced to change." Her pert, cheerful certainty on this matter is what makes the line so funny, and also so horrifying. Pete has his own way of dealing with marital pressures. He's keeping a relatively benign secret from Debbie, and when she discovers it, she lashes out at him -- and the ensuing confrontation makes you feel horrible for both of them. Apatow has no compunction about going for uncomfortable laughs, as well as breezy ones.

This is a romantic comedy that's unafraid to face human suffering dead on. And yet, in the end, it's all the more joyous for that. "Knocked Up" is a beautifully shaped piece of work: There are no slack patches, no gratuitous feel-good moments -- if you walk out of "Knocked Up" feeling good, that means you've earned it.

With that, Zacharek nails "Knocked Up" on the head.