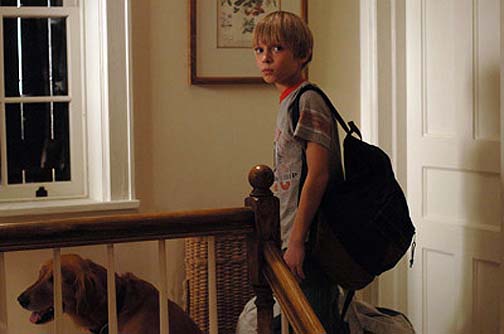 The youngest victims of the games.

1) A letter from Kate Johnson, published at RogerEbert.com:

Too late I read your review [of "Funny Games"]. I was blindsided by this movie. Went with a friend and didn't know a THING about it beforehand. All I kept saying was, "Let's get out of here. It's a MOVIE. The director/ producer / whatever is trying to force-feed us with S--T. How can the actors even think of being in such a movie -- what about that little boy?"

Finally when it was over and my "friend" looked like a deer in the headlights -- I was physically sick. I demanded my money back from the box office only to have the girl laugh at me -- at first. I threw up on the floor right in front of her -- and it splattered. She gave me the money, helped me clean up and actually cried. My "friend" was embarrassed by my behavior -- and therefore has lost my friendship. This whole last scene (starring me, my friend, the cashier at the box office), seemed a sequel to the movie.

Advertisement
First, I applaud Kate Johnson's response to the movie, which I think was appropriate and creative (though it may not have been fun for her). Was she the target audience for "Funny Games"? Nobody's really saying.

2) In a story headlined "Haneke plays 'Games' with critics," Variety reports: "'We always expected it would have a polarized response,' says WIP topper Polly Cohen, who admits she was both repulsed and compelled by the film. 'It's for a very specific audience.'" (Barf or applaud: It's up to you! The critical reaction is split right down the middle at RottenTomatoes.)

That article includes a self-reflexive comment in the spirit of "Funny Games." Be sure to read through to the final sentence to see who gets the last laugh:

The pic did resonate with a certain aud, generating $520,000 at 289 theaters for a $1,799 per-screen average in its opening weekend. And Cohen expects it to resonate even more with Europeans. "We realized with American tastes it could go either way," she says.

JANINE: WE CAN CUT THESE NEXT TWO GRAFS FOR SPACE:

Even some of the harshest critics acknowledge Haneke's skills -- while wringing their hands at his choices.

"It's this moralistic finger-wagging -- scolding us for lapping up what he's serving -- that makes 'Funny Games' so infuriating," Newsweek's David Ansen opines. "That this relentless barrage of psychological and physical torture is extremely well made and powerfully performed... somehow makes it worse."

Ironically, Haneke could soon get a taste of his own medicine: A Ron Howard redo of "Cache" is in development at U.

Haneke thinks we’re all sick and depraved to seek out violent entertainment, and he uses his film like a golf club to bludgeon us for our sins. Only his bludgeoning felt good to me. I didn’t feel implicated; I felt moved, like I had just seen a virtuoso do something impressive, even if the virtuoso himself didn’t seem to understand exactly why it was impressive. [...]

The implication of "Funny Games" is that violent pop culture points to a lack of morality in society, and I reject that idea, just as I reject it when it comes from right-wing politicians every four years. I just don’t think “enjoying” fake violence — which is stylized, cinematic, and, you know, fake -- is in any way like enjoying real violence — which is clumsy, ugly, and, you know, real — unless you’re f--king nuts. [...]

I actually found myself feeling relieved whenever the fourth wall was broken, because it was a brief respite from the overwhelming “reality” of the film. “Oh yeah, these aren’t real people in a real situation, it’s just a bunch of actors pretending to hurt each other.” This is fiction, not snuff. So, what am I supposed to feel bad about? That I enjoy letting Haneke make me feel supremely uneasy over imaginary people getting hurt? If that’s the case, then all drama — whether the conflict is physical, emotional, or spiritual—is morally suspect. And, sorry, but I don’t buy that. If Haneke thinks dumb, violent American films are harmful (though, again, I think he’s misguided in that belief) the proper response is to make more smart thrillers like "Funny Games," only without the hectoring next time.