From Wasilla to Fargo: Sarah Palin in Rashomon

Michael Cera, on his decision to act in "Juno" (or "Juneau"):

"Well, I had a feeling when I took the part that something like that would happen, that Sarah Palin would run and her teen would be pregnant, and so I'm glad that it finally was fulfilled."

The Fargo Interview, with Marge Gunderson:

Gosh darn it, whether ya just love her or ya can't stand her, there's something about that Sarah Palin that's got everybody talkin' -- whether it's tryin' to talk her kinda plain ol' "Say it ain't so, Joe Sixpack" Hockey Mom talk, or just tryin' to figure out what the heck the gal is sayin'! Can ya tell what she thinks she means when she flaps that lipstick, or do ya just like the sparkle motion she makes when the words come out? Get back to me on that! Anyways, here we go again, with a buncha ways of looking at that Sarah Palin Talk that everybody's talkin' about:

Since the vice presidential debate on Thursday night, two opposing myths have quickly taken hold about Gov. Sarah Palin of Alaska. The first, advanced by her supporters, is that she made it through a gantlet of fire; the second, embraced by her detractors, is that her speaking style betrays her naïveté. Both are wrong. [...]

But it would be unfair to question the authenticity of her accent or to use it as a measure of her intellect or sophistication. The dialect is certainly for real. Listeners who hear the Minnewegian sounds of the characters from "Fargo" when they listen to Ms. Palin are on to something: the Matanuska-Susitna Valley in Alaska, where she grew up, was settled by farmers from Minnesota during the Depression.

Hard as it may be for political junkies to believe, Thursday's debate will be the first time many Americans will actually hear Gov. Sarah Palin speak -- and they're in for something distinctly different. It's not just her habit of referencing moose hunting or pit bull cosmetology that distinguishes the governor. It's that accent.

Not since John Kennedy's Boston brogue took the stage at the 1960 presidential debates has a national politician's tongue stood out in such a way. [...]

"Say it ain't so, Joe, there you go again pointing backwards again. You preferenced your whole comment with the Bush administration. Now doggone it, let's look ahead and tell Americans what we have to plan to do for them in the future. You mentioned education and I'm glad you did. I know education you are passionate about with your wife being a teacher for 30 years, and god bless her. Her reward is in heaven, right?"

Now comes Ms. Palin, a smiling, bubbly vice-presidential candidate who travels in an alternate language universe. For Ms. Palin, such things as context, syntax and the proximity of answers to questions have no meaning.

Most of the [VP debate] commentators, again, seemed to get it wrong, mainly because they were grading on a curve. Palin did "better than expected." On the other hand, she had been expected to do so poorly that she could hardly fail to do better than expected, i.e., she was expected to do better than expected, which means that she did about as well as expected. But according to the insta-polls, the electorate, as opposed to what I once called the expectorate, seems to have concluded fairly clearly that Biden "won," possibly because what the electorate was expecting was a debate between two candidates for Vice-President, not the raw materials for some arcane calculation of who exceeded whose expectations. Biden succeeded in making a case for the Obama-Biden ticket. Palin succeeded mainly in making a case that she, Palin, is a person of near-normal intelligence and great superior adorability.

You want to smile with her and wink back. But who did she resemble more? Marge Gunderson, whose peppy pleasantries masked a remorseless policewoman's logic? Or Jerry Lundegaard, who knew he didn't have the car on his lot, but smiled when he said, "M'am, I been cooperatin' with ya here." Palin was persuasive. But I felt a brightness that was not always convincing.

I'm sure I'm not the only male in America who, when Palin dropped her first wink, sat up a little straighter on the couch and said, "Hey, I think she just winked at me." And her smile. By the end, when she clearly knew she was doing well, it was so sparkling it was almost mesmerizing. It sent little starbursts through the screen and ricocheting around the living rooms of America. This is a quality that can't be learned; it's either something you have or you don't, and man, she's got it. 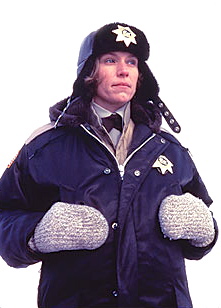 There she was, resplendent in black, striding out like a power-walker, and greeting Joe Biden like an assertive salesman, first-naming him right off the bat. [...]

She spoke with that calm, measured poise that marked her convention speech, not the panicked meanderings of her subsequent interviews.

When nervous, Palin has a tendency to over-enunciate her words like a graduate of the George W. Bush School of Oratory, but Thursday night she spoke like a normal person. It took her about 15 seconds to define her persona -- the straight-talking mom from regular America -- and it was immediately clear that the night would be filled with tales of soccer moms, hockey moms, Joe Sixpacks, main-streeters, "you betchas" and "darn rights." Somewhere in heaven Norman Rockwell is smiling. [...]

The race has not been transformed, but few could have expected as vibrant and tactically clever a performance as the one Sarah Palin turned in Thursday night.

Reaction to Palin's speech has been highly varied. Some people dislike it, finding it harsh or grating; others regard it as charming or authentic. These are common responses to a distinctive accent. Depending on the context, such an accent can make a person seem stupid or uneducated or, conversely, honest and folksily trustworthy -- often at the same time. Some people exploit this for effect, emphasizing and de-emphasizing dialect features to prompt a particular reaction. Linguists call this code-switching. In this Palin interview with Katie Couric, you can hear her enunciating her -ings and her yous more clearly in responses where she appeared to have a ready answer, and returning to her more natural -in' and ya when she seemed stumped, which suggests that Palin may have been deliberately attempting to minimize her dialect features for that audience.

"Well, our founding fathers were very wise there in allowing through the Constitution much flexibility there in the office of the vice president. And we will do what is best for the American people in tapping into that position and ushering in an agenda that is supportive and cooperative with the president's agenda in that position."

"I'm not sure I agree with you a hunnert percent on your policework, there, Lou."