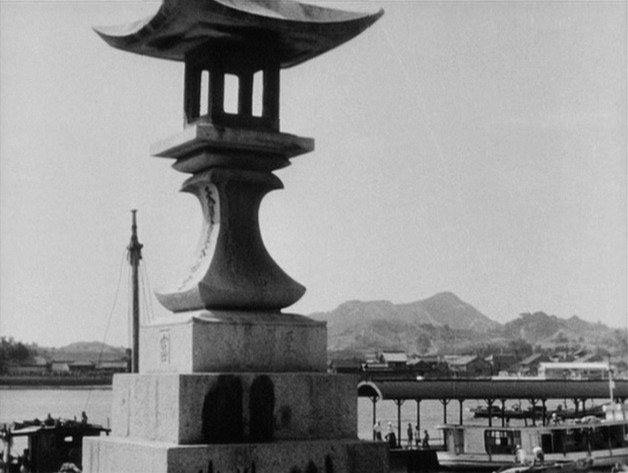 Establishing shot: The first image of Yasujiro Ozu's masterpiece, "Tokyo Story." Ozu tends to begin with a series of static shots (say, three to five) that set the location and mood.

Was there a moment when directors started to feel that they had to weight the first shot heavily, to treat it as a dense moment that the viewer should savor? The first shot of a film could be as vivid and bristling with implication as the first sentence of a novel. When might directors have begun to think along these lines?

Advertisement
He then surveys several of your (and my) Scanners favorites, and mentions a number of his own (from films by Harold Lloyd, Yasujiro Ozu, D.W. Griffith, Sergei Eisenstein and others):

Fairly far back in film history, directors seem to have realized that first shots should be freighted with implication. There probably isn’t only one moment when this strategy arises, but I’d suggest looking first at the period when synchronized sound comes in. Most films at the time were pretty static and theatrical in their reliance on dialogue, so a flashy opening shot or sequence could reassert “This is cinema." The bravura tracking shot was a common way directors chose to draw the viewer into the film’s world, as at the start of "Threepenny Opera" or of "Scarface." Maybe this is a key moment in which filmmakers began to realize that the opening shot of a film should grab or puzzle the viewer and let us reflect a little on the fact that it’s doing so.