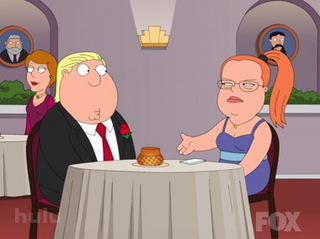 That's not my headline up there. It's from an unsigned entry at Huffington Post, where you'll find a clip from this recent "Family Guy" episode ("Extra-Large Medium"). I don't watch the show, so I may not understand the context of the scene in which the dumb 15-year-old son, Chris Griffin (voiced by Seth Green), goes on a date with Ellen, a girl with Down syndrome on whom he has a crush.

Here's the way Huffpo describes it:

The show, which has a history of crossing the line at every opportunity, took a shot at Palin last night, mocking her son with Down syndrome.

... While never mentioning Palin by name, the girl drew a clear comparison to her son, Trig, when she told Chris, "My dad's an accountant, and my mom's the former governor of Alaska."

Palin has yet to comment on the personal jab...

Maybe you can explain the nature of the "mocking," the "personal jab," for me. It seemed like an off-the-wall thing for Ellen to say, but I watched the first five minutes of the episode and that seems to be the show's m.o. There's a cutaway to Peter starring in a one-person stage production of Andrew Lloyd Weber's "Starlight Express," too.

Palin (who didn't wait long to comment) and her daughter Bristol responded to the episode with a Facebook note addressed to "Fox Hollywood" (to distinguish it from Palin's employer, Fox News?). Bristol Palin wrote:

Are there any limits to what some people will do or say in regards to my little brother or others in the special needs community? If the writers of a particularly pathetic cartoon show thought they were being clever in mocking my brother and my family yesterday, they failed. All they proved is that they're heartless jerks.

You know how much I'm fascinated by how people interpret jokes. And I think Sarah Palin is one of the funniest figures in contemporary culture (at least since Billy Carter). But what was the nature of this joke, do you think? What was the show trying to say, if anything, about Trig, or Palin, or kids with Down syndrome, or people belonging to what Bristol Palin calls "the special needs community"? In other words, when Ellen says her father was an accountant and her mother is the former governor of Alaska, where is the joke? What is the insult? (And why is she called "Ellen" -- is that a personal jab at the new judge on "Idol"?) Is it that she doesn't mention the name of a very well-known person? Or that this person is the world's most famous parent of a Down syndrome child (but a boy baby, not a teenage girl)? Maybe a reference to the rumors that Trig isn't really Palin's child -- and that she'd secretly adopted others in the past? I don't know. What's funny about it? (Or, if you don't think it's funny, what do you think was supposed to be funny about it?) Is mentioning that someone has Down syndrome supposed to be insulting? Or funny? Maybe you can fill me in with some background about the show that explains what's going on here. Meanwhile, when I get the chance, I'm going to try to watch the whole episode, but for now I'd like to get your reading...

UPDATE (02/18/10): Andrea Fay Friedman, the actor with Down syndrome who voiced the character of Ellen strikes back at the Palins in an e-mail to the New York Times:

In my family we think laughing is good. My parents raised me to have a sense of humor and to live a normal life. My mother did not carry me around under her arm like a loaf of French bread the way former Governor Palin carries her son Trig around looking for sympathy and votes.

And in an interview with Dave Itzkoff:

No, I'm proud of it. I'm not embarrassed. But mostly, it doesn't matter if you have Down syndrome. Really, it just matters to have a different challenge. [...]

It's not really an insult [to people with Down syndrome]. I was doing my role, I'm an actor. I'm entitled to say something. It was really funny. I was laughing at it.

I still don't get what the "personal jab" was supposed to be...