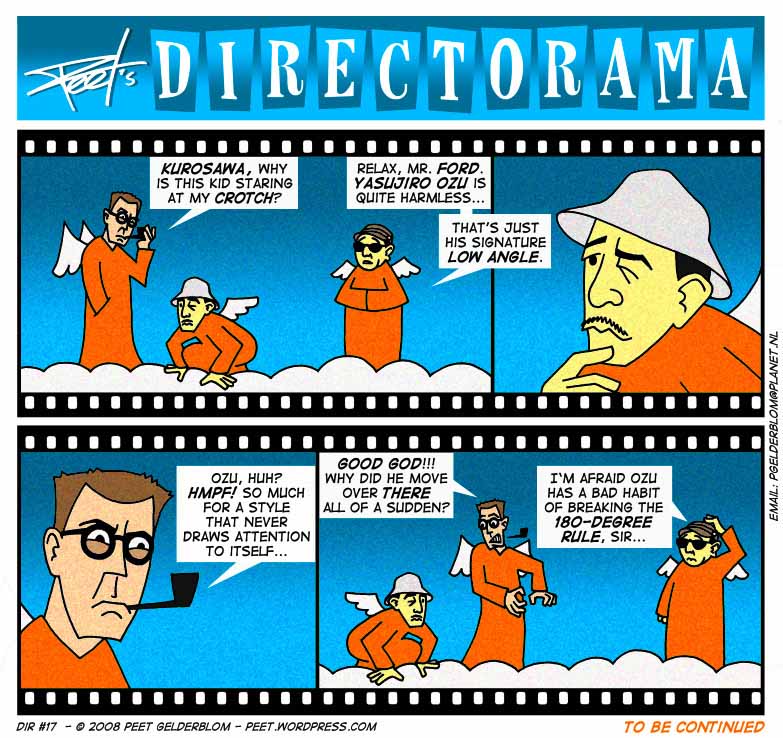 This may be my favorite strip so far in Peet Gelderblom's comic "Directorama," which is being serialized at The House Next Door. In case you haven't been following it, and you should (see Webcomics Nation for the whole series), it's described as a weekly chronicle of "the afterlife of a pantheon of legendary directors. Their mission: To inspire the film-makers carrying the torch back on Earth." After hearing today that Japanese director Kon Ichikawa ("Fires on the Plain," "The Burmese Harp," "An Actor's Revenge") had died today at age 92, I imagined him standing just outside these frames...

From Alexander Jacoby's essay on Ichikawa at senses of cinema:

Of the few Japanese directors who command an international reputation, Kon Ichikawa remains perhaps the least known and the least well understood.... While Ichikawa's work lacks the obvious integrity of Ozu's, Mizoguchi's or Kurosawa's, its outward variety belies an overall unity, revealed as one probes (in Tom Milne's phrase) “beneath the skin.”

In fact, Ichikawa worked under somewhat different conditions from the other acknowledged masters of Japanese cinema. The commercial pressures he faced appear to have been rather stronger: it is on record that several projects (including one of his most famous, "An Actor's Revenge") were imposed on him by the studio in revenge for the failure of his more personal works to make a profit. Yet he managed, at the same time, to stamp his personality on diverse material. An obvious comparison is with Howard Hawks, whose comedies, which focus on the battle of the sexes, are often described as the thematic obverse of his action films, about camaraderie in an almost exclusively male world. Ichikawa, similarly, divided his films into “light” and “dark”, a division which has some justice –- though my own preferred categories would be “ironic” and “sentimental”.