Dexter: Putting it together 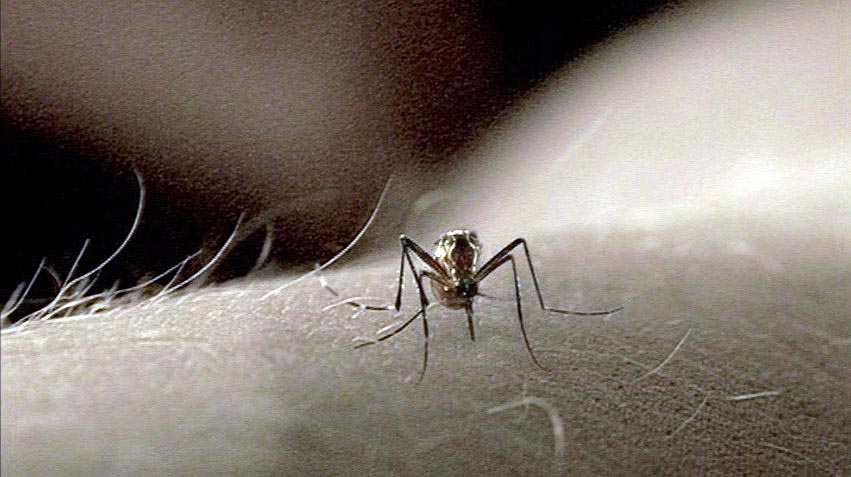 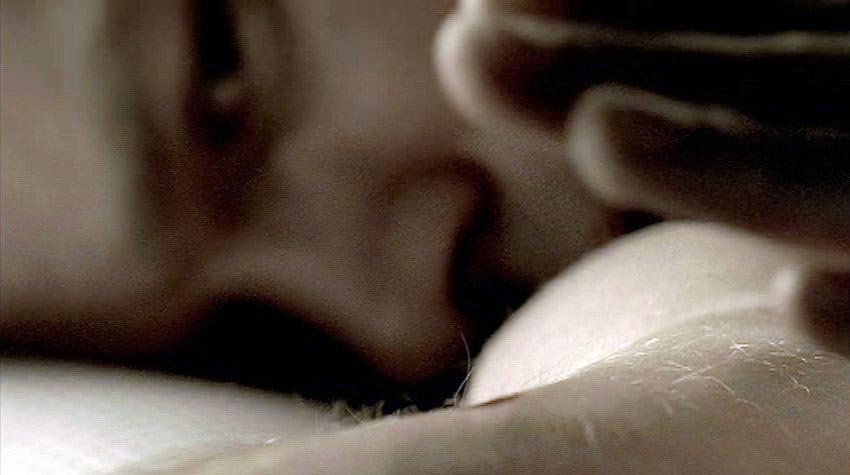 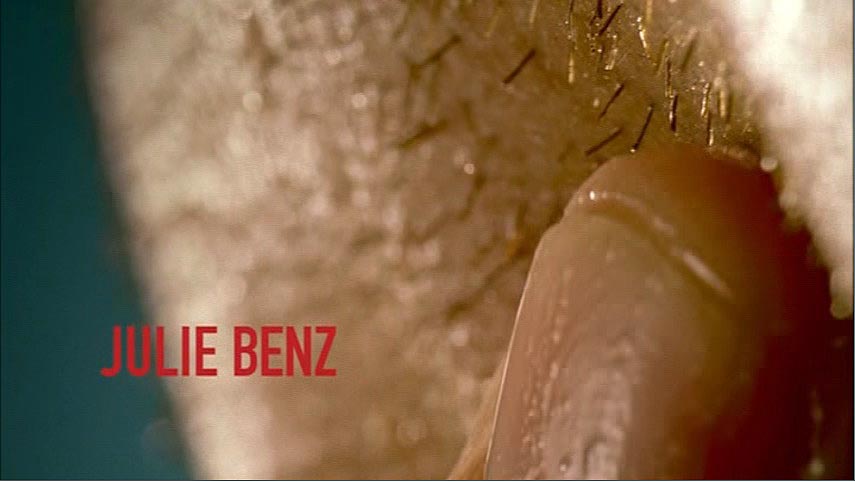 (December 7, 2007: Re-submitted as a contribution to the 'Short Film Week' Blog-a-thon co-hosted by Only the Cinema and Culture Snob.)

(This is another contribution to the Close-Up Blog-a-thon at the House Next Door.)

Creating, assembling, integrating, asserting, and maintaining a personality is routine for most of us, but there's no denying it's hard work. Some of us have to do it from scratch every day. That's what so chillingly magnificent about the opening credits sequence for Showtime's "Dexter." It shows a man putting himself together (piece by piece, close-up by close-up) in the course of enacting his morning rituals. Yes, there are plenty of playful groaners about knives, flesh, and blood. Dexter is a serial killer -- albeit one who's trying to use his control-freak instincts to keep his habit manageable, within certain ethical boundaries, even as he daylights in forensics for Miami homicide. (He's a blood-spatter expert, naturally.) 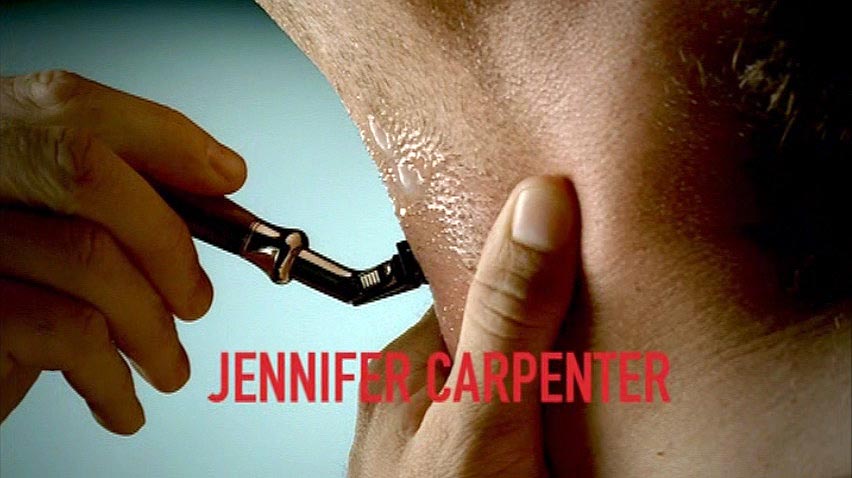 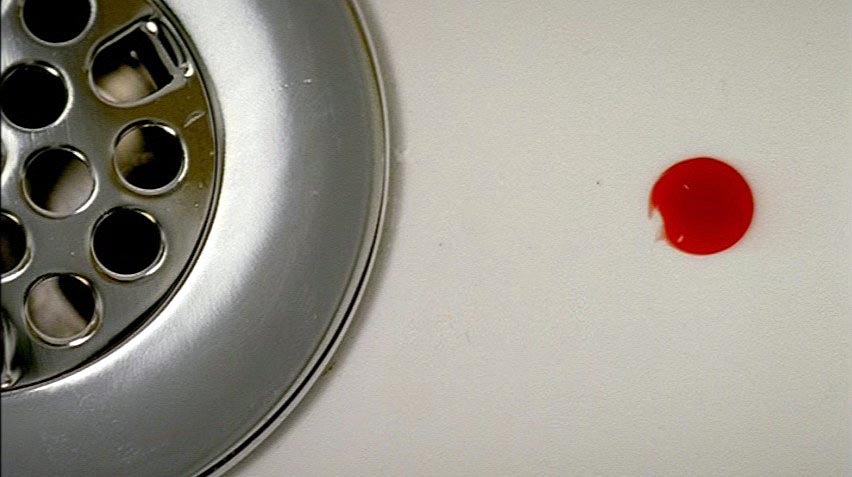 We recognize his daily rites as things we all do every day, but they're rendered in such garish (Miami!) colors and macro-close-ups that they appear to us grotesque and purified, ultra-specific and abstractly universal, at the same time, like Pop Art. Even the messy parts look like Abstract Expressionism (like the blood spatters Dexter hangs as art above his desk at work), from the collection of Dexter Morgan. His most valued collection, however, consists of the blood slides of his victims, which he keeps neatly and discreetly filed in a box inside the air conditioner.

The credits gallery is accompanied by jaunty/menacing music that's both spicy Latin in flavor and creepy Gothic in sensibility. A guitar/kalimba/harpsichord sound. Sassy/sinister horns punctuate the mocking melody with bleats, cackles and growls. It's like the "Addams Family" theme played by a Mexican Day of the Dead band of mâché skeleton musicians. Who are, no doubt, Cuban immigrants. 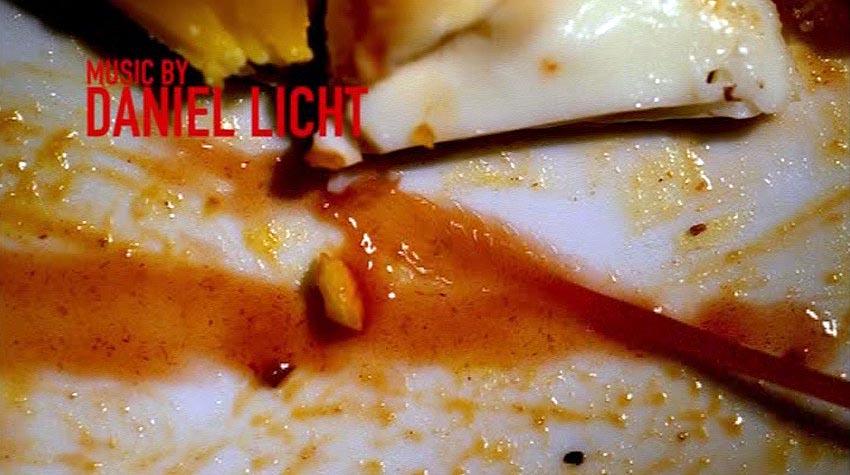 A dash of Abstract Expressionism. 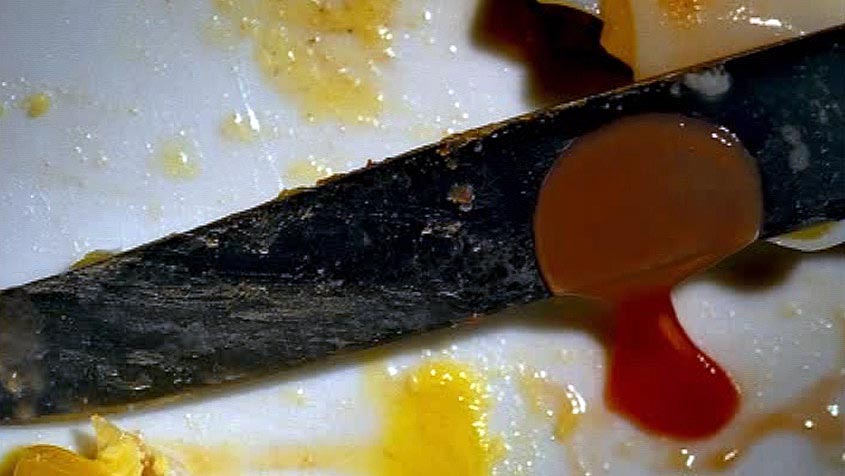 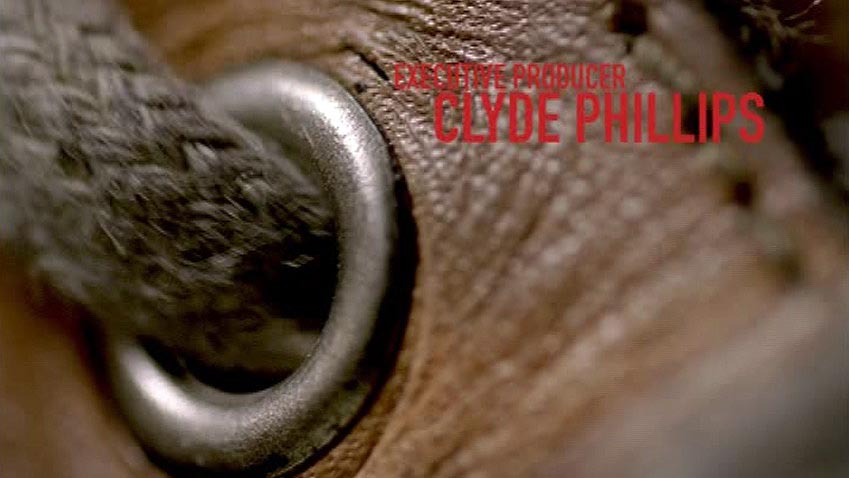 The first time you see it (the titles sequence wasn't used in the initial pilot episode), it tells you everything you need to know about the character. Every time after that, it immerses you into the world of the show, like the best opening montages that took you by the eyelids and pulled you into "Twin Peaks," the New Jersey of "The Sopranos," the muddy shit-hole mining town of "Deadwood."

It begins with an extreme close-up of a mosquito (like Dexter, a blood-sucking predator). SMACK! Dexter swats it and we rack-focus down his extended forearm and notice his face -- still fuzzy, abstract, in semi-darkness, cheek against the mattress. The hint of a satisfied smile. Another kill, another day. Good morning! Time to rise and shine. Let's begin with a shave: Huge fingertips brush over wire stubble; the flesh beneath the bristles is elastic, alive. Shaving gel: Yes, it looks like semen. This is a show about bodily fluids. (And about performing.) A trickle of blood runs flows into the top of the frame and down the tender skin of the neck. A drop -- twothree -- splatters near the drain in the sink. (We have other Jungian -- er, Hitcockian -- memories of blood and drains, don't we?) A piece of tissue soaks up the red from the nick... 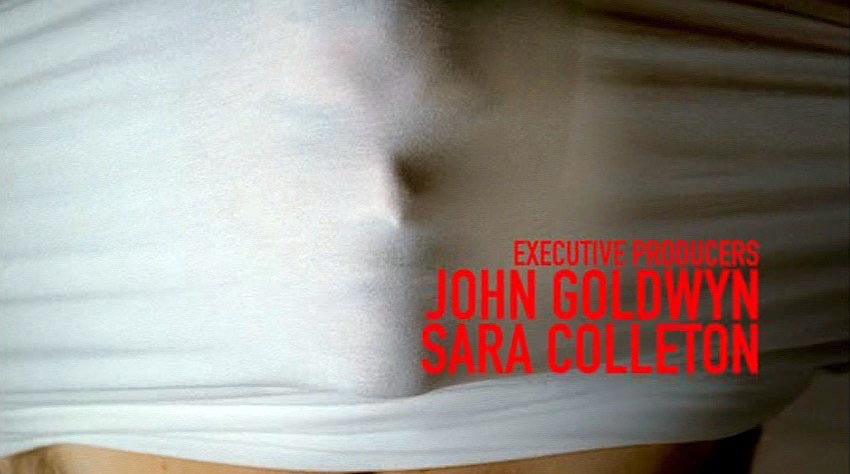 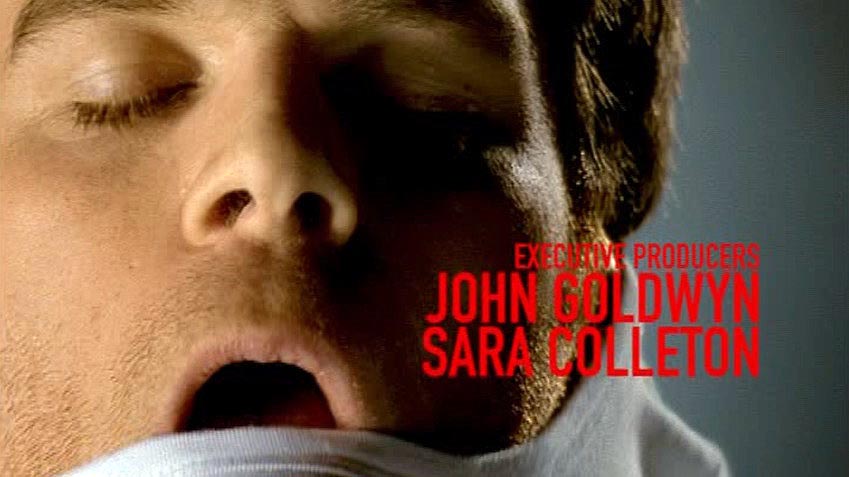 Breakfast. Knife blade slices through more tissue -- packaging and flesh. Ham. Eggs. Broken. Fried. Sizzling. A splash of Tabasco shoots across the screen like a spurt of blood. The cutting is jerky -- jumps and stutters. A maw devours the meat. Appetite. 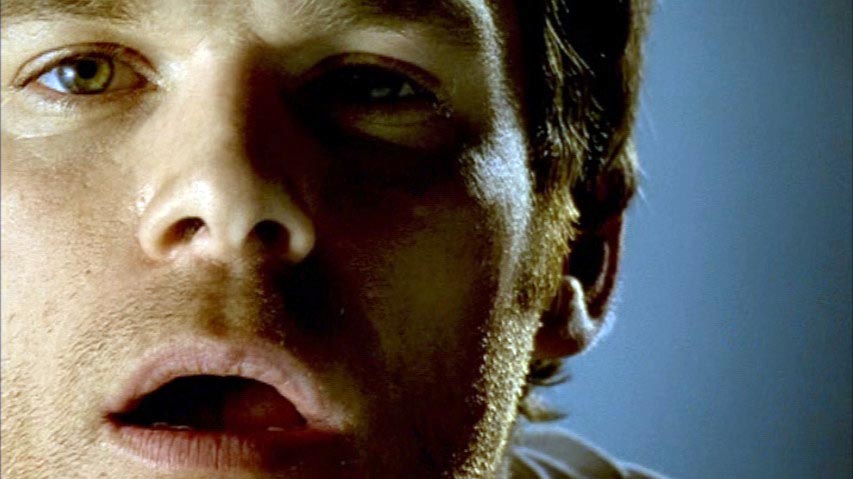 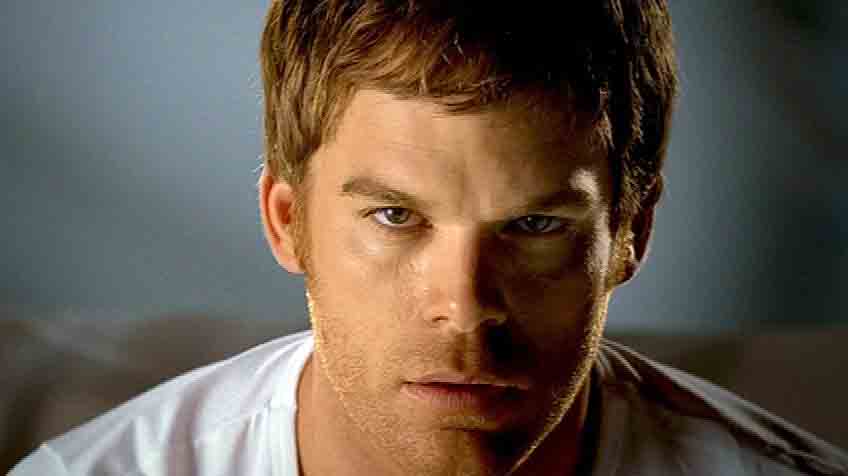 A garrote. Exposed neck. No, just dental floss. Shoelaces threaded through eyelets, holes in skin. A rope pulled taut, as if to choke off a carotid artery. Extreme tension. A white t-shirt pulled tightly over a head, like a bag over a suffocation victim. The contours of a face appear behind the stretching fabric, suggesting a nylon stocking contorting the face of a criminal, or Freddy Krueger pressing his face from the wall above the bed in the original "A Nightmare on Elm Street." The collar pops over his nose and his lip (which flaps like rubber) and we get a clear view of Dexter's face for the first time. He looks us in the eye. For just a little too long. It's uncomfortable. For us, not so much him. He's pretty sure he can present a "normal" face to the world. He's been doing it all this life, every day. 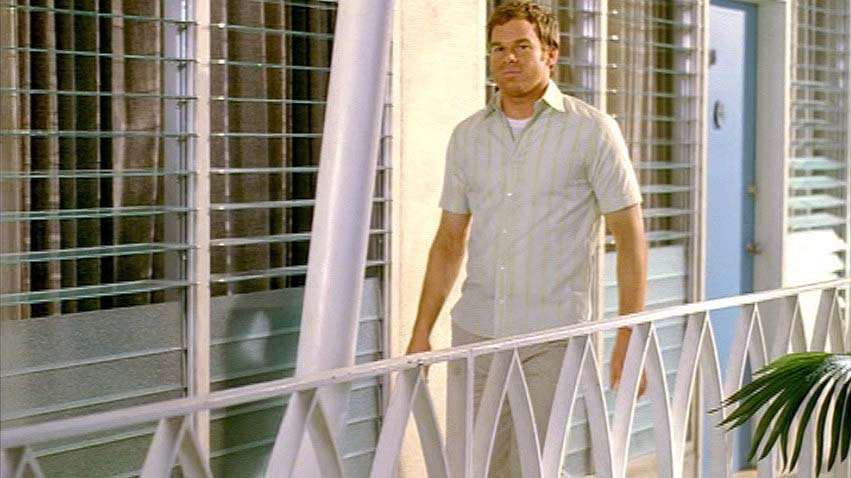 Close-up of a deadbolt lock. The key turns. And then, the money shot: We see Dexter pulled together, the complete look, as he leaves his apartment and heads out into the world in the harsh light of day. His shoulders are a little hunched, held a bit too high. His walk, his taut expression, even his wardrobe -- something's off. They're all stiff. Over-determined, controlled. Dexter catches our eye and flashes an unconvincing but polite smile. Cordial without being warm. Sociopathic. He knows we know. But nobody else does. It's our little secret.

See for yourself. It's right here: