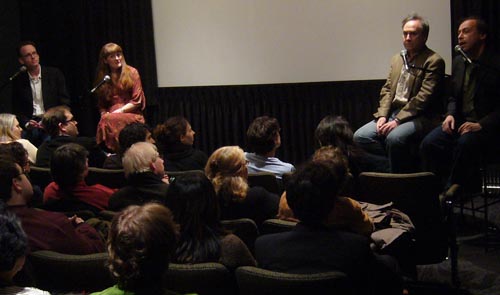 Photo from The Reeler: VanAirsdale and Zacharek on the right; Edelstein and Gleiberman on the left.

In other Contrarian News:

The Reeler (aka S.T. VanAirsdale) moderated a critics' panel on the best and worst films of 2006 Wednesday in New York. The critics: David Edelstein (New York Magazine), Owen Gleiberman (Entertainment Weekly) and Stephanie Zacharek (Salon.com). According to The Reeler's own account of the evening, Zacharek said, "...I think there is some sort of unspoken sort of pressure. Like, 'If I put something really weird on there, people are just going to think I'm cracked.' " Writes VanAirsdale:

I couldn't control myself. "Exactly!" I said. "So how long before we admit that Top 10s are completely intellectually bankrupt exercises?"

"I think what Stephanie has captured, though -- if what (she's) saying is true -- is that these lists have become very political," Gleiberman said. "But in a strange way; not in the way of people putting on these big commercial movies so they please their editors and to show that they're on the side of the people. But even in picking idiosyncratic films, it's films that all the critics kind of collude on deciding are good; therefore, maybe they can get away with putting those films on their list in terms of their editors. But the point is that they're not reflecting 100 percent themselves. And I don't get the idea of any critic who reflects anything other than himself. What's the point of going into this profession? It's not really that important anyway. I mean, it's all about your own reaction. I think if you take that out of it, you've lost the reason for doing it."

"That's why you should all treasure the crackpots," Edelstein told the crowd. "You know? Don't look for the people who are just going to rubber-stamp the Oscar-winning movies. Seek out minority points of view -- even insane points of view -- that maybe will help you do some fresh thinking, because it's amazing how easily we settle into this conventional wisdom. Even critics, in our splendid arrogance, I mean... I can't tell you how lazy my thinking is and how often, and how I need great critics to shake me up. Like, you know, the people on this panel."

OK, this exchange strikes me as peculiar (and a little disturbing) in several respects:

1) Has anyone ever suggested that Top Ten lists are not "intellectually bankrupt enterprises"? (If so, are these the same people who still believe Saddam had Weapons of Mass Destruction?) Don't we all know that these hierarchies and pantheons we build are really just silly little games we like to play -- ones that critics and the outlets who publish them (and even readers) employ as handy gimmicks to summarize and revisit the movies released during a given calendar year (which, of course, is itself a completely arbitrary measure)?

2) Isn't there a bit of "intellectually bankrupt" bait-and-switch at work here, given that the premise of the panel itself was a discussion of the "best and worst movies of 2006"? Does the fact that the audience is being enticed to attend with a promise of a best/worst discussion not, instead, echo the format of the "Ten Best" list, and underscore the enduring popular appeal of these annual masturbatory exercises?

3) I've never written for a glossy New York-based magazine or even a glossy webzine (I'm a longtime west coast newspaper and web guy), but I find it mighty disturbing that critics would feel pressure from their editors -- or their consciences -- when making their little lists, whether it's by trying to appease their editors and readers with commercial choices (or de-facto Oscar predictions), or fearing alienating them with choices that they might be consider too odd or unpopular. Whatever happened to the critic's editorial independence (not to mention professional integrity)? I thought most critics tried to use their lists to help bring attention to off-the-beaten-track personal favorites that might be overlooked by others. Isn't that the point? I agree with Gleiberman: "I don't get the idea of any critic who reflects anything other than himself. What's the point of going into this profession?"

4) Manohla Dargis has spoken of the critical collusion, the monolithic opinion-forming, that Gleiberman alludes to in New York. (That's why Dargis says leaving NYC was liberating for her as a critic.) How do these critics collude? Why do they share their opinions with one another before they've written their reviews? This seems terribly unprofessional (and clique-ish) to me. During my years as a reviewer in LA and Seattle, we critics would of course talk about movies we'd seen, but never with the intent of trying to sway one another or form a collective opinion. Can anybody shed further light on what Gleiberman is talking about?

5) I think I understand the impulse behind Edelstein's crackpot endorsement (although I think he may have labeled his fellow panelists crackpots), but he does say, "I need great critics to shake me up." A great critic can do that. A mere crackpot can't. That's a distinction that needs to be made (as I tried to do in my "Do the Contrarian" posts, Parts I and II). Crackpots are a dime a dozen in print, broadcasting and on the web. We are overrun with crackpots in the media. They're everywhere, and they're not gonna shake you up because they're just poseurs, self-promoters and exemplars of lazy thinking. The most they can do is waste your time. Do Sean Hannity or John Gibson actually have the brains or substance to shake up your thinking about politics? No, because they're crackpots -- extremists for the attention-getting sake of being extreme. Let's not confuse recklessness or idiocy with daring or inspiration.