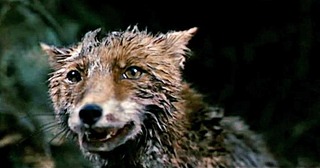 Here's a wickedly perceptive analysis from John Scalzi at Whatever about how the Obama administration is playing Fox News. Scalzi says that the White House is "delighted" that Fox has skewed so far to the right, and knows that by calling out the network as an ideological outlet rather than a news organization, Fox will only spin furiously, even further out into fringe territory -- solidifying its base (in the Palin sense) and alienating even more of the mainstream audience:

Two quibbles: A more meaningful comparison might be to the (shrinking) number of people who get their news from TV, rather than to the total population. And, again, I would argue that Fox is not principally or uniformly "conservative." There are plenty of traditional American conservatives who have no respect for Fox's lowbrow pandering, but those kinds of conservatives have been marginalized by the talk-radio mentality that Fox promotes. "Reactionary" is a better term for Fox's style and content. The channel's figureheads don't pretend to unite behind one coherent political philosophy. There are dabs of libertarianism, neoconservatism, partisan Republicanism, paranoid Know-Nothingism, Evangelical Protestantism -- all reflecting a general attitude that's anti-liberal and anti-moderate, but not necessarily coherently conservative.

Nevertheless, Scalzi explains how he thinks the game will play out:

Follow: The White House says Fox News is not a real news organization and is the propaganda arm of the GOP, Fox News throws a very public shit fit about it, which gives it higher ratings and an impetus to skew even more to the right in its presentation, and go out of its way to criticize Obama even further. Meanwhile the noise is all covered by multiple other news outlets, which in aggregate reach a much larger audience, which show Fox News anchors and personalities in the middle of ideological conniptions, confirming to the general population the proposition that, indeed, Fox News is more interested in politics than news, and reinforcing the impression that Fox News and the GOP are reading off the same page.

Fox says just check its news programs -- filled with "fair and balanced" coverage -- and don't peg its reputation solely on the work of commentators like Glenn Beck, Sean Hannity and Bill O'Reilly.

The debate over the meaning of Fox News has become so routine, and so routinely partisan, that one hesitates to join the fray again. But when the debate reaches a presidential level, it seems worth reminding everyone, again, how much the boundaries between news and opinion have blurred and how sanguine most people have become about it all. [...]

I spend part of virtually every day with Fox. Yes, there are stretches of straight reporting apparently bereft of ideology. And then there are all-too-frequent instances of what the military might call "mission creep," opinion journalism bleeding into what are ostensibly news programs. [...]

[The] Center for Media and Public Affairs at George Mason University -- whose findings have been used in the past to prop up arguments of liberal bias -- has found the broadcast networks have not rolled over for Obama. (It doesn't examine MSNBC, because MSNBC does not run the equivalent of a nightly news program, but I plan to devote a column to how much the left-leaning cable outlet mixes news and opinion.)

Researchers at the center tag statements on news programs as either positive, negative or neutral, then total the results. Of the opinion statements about President Obama on the networks between Inauguration Day and Oct 10, the center found 65% to be negative and 35% positive.

So Fox is not alone in giving the president a tough once over. But it would appear a more dispassionate broker if it more routinely went after both sides, as its top anchor, Shepard Smith, has done on occasion....