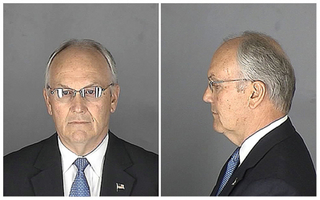 That is not news to anyone who listens to NPR, nor are the rumors about both men's sexuality. Craig is infamous for having been arrested for soliciting an undercover officer for gay sex in an Minneapolis airport restroom. Crist has publicly faced direct questions about his sexual orientation since 2005. Both are elected officials, public figures, who have -- by their own actions -- made their sexuality relevant to their job performance.

And yet, NPR.org refused to print the names of these politicians in Lee's review. Lee then asked that his byline be removed, and offered an explanation for his decision to readers -- which was published, then partially redacted by NPR.org.

Let me try to put this in perspective. Back in 1976, Secretary of Agriculture of Earl Butz was forced to resign because of dirty racist joke he told in front of John Dean and Pat Boone on a commercial flight after the Republican National Convention. The mainstream press would not report what, in fact, he actually said. So, a cabinet official lost his job and the American people were not told why. Only the Toledo (OH) Blade and the Madison (WI) Capital Times (and Rolling Stone) accurately reported the joke that cost him his position at the highest levels of the US government: "The only thing the coloreds are looking for in life are tight pussy, loose shoes and a warm place to shit."

That was 33 years ago. If you want to understand why the mainstream press has failed its mission so disastrously, and is suffering the dire economic consequences, don't blame the Internet -- blame the traditional press for its own lapses. NPR.org claims it has a policy against "outing." But that's not the issue here. This is not a case of "outing" a private individual for private behavior any more than the Monica Lewinski scandal or George W. Bush's alcohol problems were. It is not like reporting the name of a rape victim. These are public officials whose sexuality has a bearing on their political positions. Lee was simply reporting what was, in fact, contained in Dick's documentary -- and what had already been reported in nationwide news outlets. A mug-shot photo of Larry Craig (see above) even accompanies Lee's "Outrage" (2009) review.

This is absurd -- and we should expect higher standards of NPR, probably the most rigorously accurate news organization in the country. They owe Lee, Dick, and their web audience a correction and an apology.