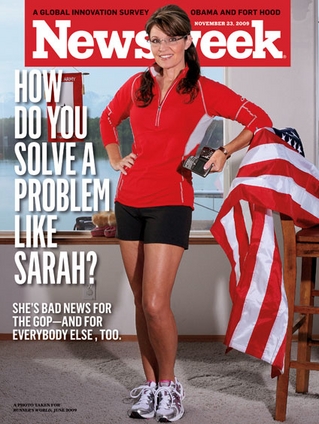 Remember last Independence Day when the (then-) governor of Alaska posed for a (psychologically) revealing photo spread in Runner's World Magazine? (Check out the whole photo spread series.) Back then, I posted the photo at right, which has now been recycled as the cover photo for this week's Newsweek magazine,¹ causing a ruckus. Sarah Palin, promoting the book ghostwritten with Lynn Vincent, posted on Facebook last night that she does not approve of the photo's re-use:

[The] profile for which this photo was taken was all about health and fitness -- a subject to which I am devoted and which is critically important to this nation. The out-of-context Newsweek approach is sexist and oh-so-expected by now. If anyone can learn anything from it: it shows why you shouldn't judge a book by its cover, gender, or color of skin. The media will do anything to draw attention -- even if out of context.

It's so true. The darned media will just do just about anything to get attention, won't they? I mean, they practically bend over and show off their babies, they're so desperate for publicity! Last July, I was struck by the provocative red-white-and-blue overtones in this particular photo, and proposed "a fun exercise in critical thinking and visual interpretation." The carefully arranged, iconic image, I wrote:

represents a veritable firecracker-explosion of patriotic and political symbolism. (Likewise the use of familiar props in this photo and this one.) Given Palin's views and background, how would you interpret it?

The responses were intriguing. I suggested that if, say, Michelle Obama (or, for that matter, John McCain) had posed in the same outfit for such a photo, she/he would be criticized for showing such disrespect for the flag. What do you see in the photo? What are the messages it conveys about its subject? Do they change now that Palin has quit her job, is marketing a book, and the photo is on the cover of Newsweek?² Let me know what you see, and what you think about it.

Me, I've said all along that I see Sarah Palin as the most hilarious thing in American politics popular culture since, maybe, Billy Carter -- leaving Dan Quayle, Fanne Foxe, Monica Lewinski and Sanjaya (wasn't he a political figure?) eating her dust. She's another, funnier-than-usual reminder (as if we needed one) that our taste for political spectacle has not evolved far beyond circus barkers and freak shows. I wish Robert Altman were alive to see this. It feeds back into "Nashville," "Tanner '88," "Buffalo Bill"... This absurdly venal character seems to have walked right out of Altman's lifelong movie.

UPDATE (11/23/09): Interviews with Palin book fans explaining her political positions and what she stands for:

¹ Runner's World has published the following explanation: "Runner's World did not provide Newsweek with the image. Instead, it was provided to Newsweek by the photographer's stock agency, without Runner's World's knowledge or permission."

² Newsweek's official response to Palin's charges of "sexism" (wait -- who posed for these pictures when she was in office?) was: "We apply the same test to photographs of any public figure, male or female: does the image convey what we are saying? That is a gender-neutral standard." Better yet, does the image convey what she is saying. The answer to that is irrefutably "yes."

Has Sarah Palin ever uttered a single coherent thought that an adult could take seriously? That's the amazing thing: The answer is unequivocally "no."

The original photo, by Brian Adams: 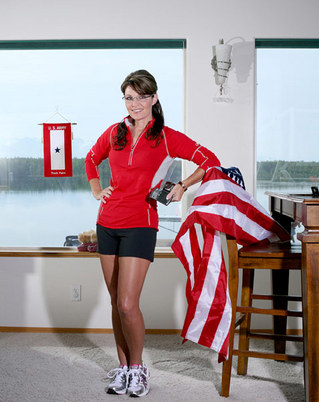