"I'm not a racist by any stretch of the imagination, but whenever people start talking about diversity, it's a word I can't stand." -- Prescott, AZ, City Councilman (and former radio talk-show host) Steve Blair

Roger Ebert posted a blog entry with his thoughts about the Prescott, AZ, Miller Valley Elementary School mural fiasco that Steve Blair ignited. It's bizarre beyond belief: On his radio show, Blair objected to large images of children of color on the mural (the models were actual students at the school); which prompted some Prescott citizens to drive by and shout things like, "You're desecrating our school," "Get the nigger off the wall," and "Get the spic off the wall," at the artists working on the mural; which led "school officials" to direct the muralists to lighten the faces of the darker children -- you know, so they wouldn't incite such controversy...

They've since reversed that latter decision, but that's not even the craziest part of the story. Blair was fired from his FOX News radio affiliate gig, but he's still a city councilman (as of this writing) and here's what he actually said on the air, May 21:

"I am not a racist individual, but I will tell you depicting a black guy in the middle of that mural, based upon who's president of the United States today and based upon the history of this community when I grew up, we had four black families -- who I have been very good friends with for years -- to depict the biggest picture on that building as a black person, I would have to ask the question, 'Why?'"

Now, we all know that Arizona has problems with an excess of brown people (called SB 1070), but here's Blair, a guy in his 50s who has lived in Arizona (non-white population roughly 40 percent, according to US Census Bureau estimates for 2008) all his life, and he can't tell the difference between a black kid and a Hispanic kid. Look at that child in the center of the mural at the top of this post. If you were told to identify him by race, what would your first response be? I'd probably say Hispanic (the race of the actual model) -- or even Chinese (maybe it's the Mao-esque style of the art) -- before I'd think "black." 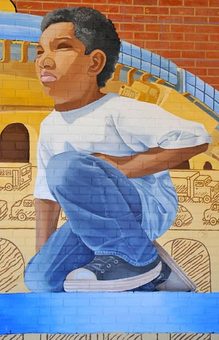 Clarifying his original remarks, Blair later said: "The focus doesn't need to be on what's different; the focus doesn't need to be on the minority all the time." OK, so his objection is that the kid is of a minority race in Prescott, even if Blair can't tell which one. But the mural, just one of several in a downtown public art project, is called "Go on Green" (the school is located at a major intersection) and it supports alternative transportation and exercise. So... tell me again, why the skin tone of the children matters? And what's wrong with depicting kids who actually attend the school? Is Blair suggesting that these murals should be required to reflect the city's (if not the state's, or the neighborhood's, or the individual public school's) racial demographics, designed so that the size of each face accurately represents that proportion of the population? A quota system for race in public art? If Blair is serious about his horror of "diversity," I'd like to hear his argument.

It's true -- and not surprising, I guess, when you consider the above -- that the percentage of blacks and Hispanics in Prescott itself is "significantly below the state average". In March, Blair objected to a 2010 Census banner in town because it was in English and Spanish. And yet the Prescott Unified School District does offer an "English Language Learner Program" aimed at "identifying students with primary home languages other than English."

But the Arizona Department of Education website says that in the 2005-2006 school year (the most recent I could find), Miller Valley Elementary had 471 students, including 139 Hispanics -- so, even by Blair's reasoning, that's a pretty good-sized minority. Would he really be happier if the actual size of the Hispanic kid was 139/471ths the size of all human figures on the mural? (From what I can see in pictures, it looks like there are two white kids -- a boy and a girl -- and maybe a black or multi-racial kid in the thing, too!)

How much more ridiculous can this get? Some Prescott residents say they just don't like the style of the mural -- that, to them, it looks "tacky" or "ghetto" or too much like graffiti. Blair added to his complaints that it was "defacing" the school's historic brick walls. Maybe Blair is right about one thing: "I would ask the question: Why?" What are these people really objecting to?