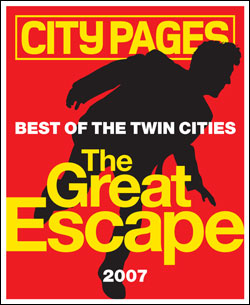 As far as I can tell from the CP web site, Nelson's final piece for them was on the critically acclaimed documentary "No End in Sight" ("Surge This," August 22, 2007):

As the movie's more begrudging admirers will likely acknowledge, Ferguson is no Michael Moore. His background is as a scholar and a Brookings wonk, and "No End in Sight" — his first film, amazingly — is less a work of investigation (or activism) than history. There's no psychology in the movie (e.g., Dubya has daddy issues), and neither are there conspiracy theories (e.g., the war is about redrawing the Middle East map and further fueling Halliburton's tank). On some level, it even endeavors to be a film without politics—and might be that if such a thing were possible. [...]

Ferguson has assembled a wealth of on-the-ground footage from a variety of sources, using it mainly to annotate his interview material, although near the end of the film he includes a horrifying home video of private military contractors randomly picking off Iraqi civilian motorists with machine-gun fire, Elvis's jaunty "Mystery Train" booming from the Americans' car radio. Throughout the film are images of burning cars, stacks of torn bodies, bombed-out homes, Iraqis weeping into open coffins—the sort of pictures conspicuously missing from network news coverage. Is the movie's reporting biased? Not if you consider that anyone who'd testify to the "good intentions" or overall success of the campaign—Cheney, Condoleezza Rice, Rumsfeld—naturally refused to comment. The evidence speaks for itself...