A slice of perfection 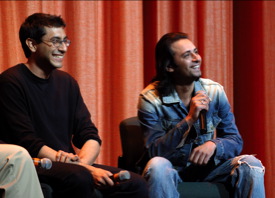 Ramin Bahrani and Ahmad Razvi after the screening of "Man Push Cart" at the Overlooked Film Festival.

"Man Push Cart": Alfred Hitchcock supposedly said that while most movies are a slice of life, his were a slice of cake. He's right about the last part, although most movies are not slices of anything resembling life as most of us experience it. But "Man Push Cart," the film by Ramin Bahrani, a director born in Iran and raised in North Carolina, is not only an exquisitely realized slice of life but a slice of filmmaking perfection. I didn't know, as I became absorbed in this portrait of a New York City street vendor whose life is slowly slipping from his grasp (like his heavy pushcart on one occasion), that it would become one of my favorite movies of recent years until moments after its inexplicably magnificent ending.

All I can tell you is that when the moment came, a thought flashed through my mind: "Wow, I would just end the movie right here -- wouldn't that be great?" And then, one more shot, and the movie was over. So, yes, I felt absolutely in synch with the vision of the filmmaker (whose manifest influences include some of my favorite directors: Robert Bresson and Lodge Kerrigan -- not to mention Albert Camus' "The Myth of Sisyphus"), but the film also had me so completely in its spell that it subtly prepared me for arrival at this ending (which, in formulaic conventional movies, would hardly be considered a conclusion at all). It just felt absolutely, ideally right. (Hitchcock also liked to say he played the audience like an organ; "Man Push Cart" is no less masterful, but its method and effects are not the bravura manipulations of Hitchcock but the subtle, underplayed shadings of Bresson or Yasujiro Ozu.)

On the most prosaic level, the story of Ahmad (Ahmad Razvi, a former restauranteur who'd never acted before), a Pakistani-American who pushes (or pulls) his breakfast cart to 54th and Madison every day, could be seen as something of a downer. But, as Roger Ebert is fond of saying, no good movie is ever depressing -- because the experience of being in the presence of such artistry is elevating. (A friend and I, in the grips of a paralyzing mutual depression, once made a pilgrimage to "GoodFellas" and the experience -- though it's hardly an upper of a movie -- temporarily, at least, lifted us out of our low-seratonin stupor because it was just so exhilarating to watch something so beautifully composed and performed.) "Man Push Cart" is that kind of movie. More later. Gotta go see Lodge Kerrigan's "Clare Dolan" now!