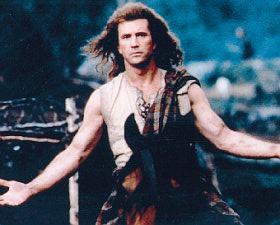 A Passion of the Mel.

When apprehended for drunk driving in Malibu last Friday, Mel Gibson claimed that "The Jews are responsible for all the wars in the world." And, yeah, he said, "F--- Jews," something of a blanket statement. But, he insists, it's nothing personal. According to his religious beliefs, everyone except those who follow his form of fundamentalist Catholicism (sometimes called "traditionalist Catholicism") is going to hell anyway -- and chances are, that includes you... and nearly everyone else in the world. Roman Catholics, Protestants (Baptists, Methodists, Lutherans, Presbyterians...), agnostics, Muslims, Buddhists, atheists, Hindus, Jains, Scientologists -- they're all going to hell. Along with the Jews. Even Mel's Episcopalian wife is, he says, hellbound. As he told the Australian Herald Sun newspaper: "There is no salvation for those outside the Church. I believe it.... [My wife] prays, she believes in God, she knows Jesus, she believes in that stuff. And it’s just not fair if she doesn’t make it, she’s better than I am. But that is a pronouncement from the chair. I go with it."

In his second apology, Gibson said: "The tenets of what I profess to believe necessitate that I exercise charity and tolerance as a way of life. Every human being is God's child, and if I wish to honor my God I have to honor his children. But please know from my heart that I am not an anti-Semite. I am not a bigot. Hatred of any kind goes against my faith." (The $64 million question remains: Just what in the world does someone have to do or say that might properly qualify as "anti-Semitic" or bigoted?) Gibson's faith rejects the ecumenical reforms of Vatican II, among them a formal statement that Jews were not responsible for the death of Jesus -- which is why the portrayal of the crucifixion in Gibson's "The Passion of the Christ" was particularly egregious to some -- including the ADL's Abraham Foxman, the same man who accepted Gibson's most recent apology.

Pope John XXIII said: ""What happened in [Christ's] passion cannot be charged against all the Jews, without distinction, then alive, nor against the Jews of today." Those words don't wash with the congregation of "The Church of the Holy Family in Malibu." Gibson's statements about religion, and particularly about Judaism, have been complicated by the religious beliefs he shares with his father, Hutton Gibson, who claims the attacks of 9/11 were perpetrated via remote control by Zionists, and who has associated himself with Holocaust deniers, although the son says his father merely disputes the number of Jewish victims: "My dad taught me my faith and I believe what he taught me. The man never lied to me in his life. [...] I have friends and parents of friends who have numbers on their arms. The guy who taught me Spanish was a Holocaust survivor. He worked in a concentration camp in France. Yes, of course. And my dad also knows that there were internment camps where many people died. Now, his whole thing was about the numbers. I mean atrocities happened. The thing with him [my father] was that he was talking about numbers. I mean when the war was over they said it was 12 million. Then it was six. Now it's four. I mean it's that kind of numbers game. I mean war is horrible. The Second World War killed tens of millions of people. Some of them were Jews in concentration camps. Many people lost their lives. In the Ukraine, several million people starved to death between 1932 and 1933. During the last century 20 million people died in the Soviet Union. Okay? It's horrible."

(For further information, see "Disown Your Dad's Denial of the Holocaust, Gibson Told" -- The Australian, December 8, 2005.) Meanwhile, ABC has cancelled the Holocaust miniseries it was developing with Gibson's Icon Productions, saying no script was ever delivered.