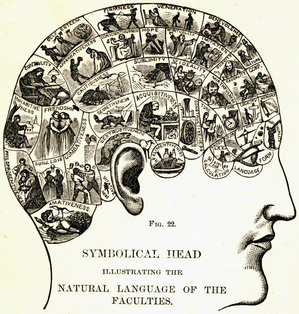 Blind people develop a more acute sense of hearing. Deaf people can better notice events on the periphery, and comprehend the quick movements of lips and sign language. What about people who lose the ability to speak? We expand other ways of communicating. There are three ways I can "speak." I can print notes. I can type on my laptop, and a built-in voice says them aloud. I can use my own pidgin sign language, combining waving, pointing, shrugging, slapping my forehead, tracing letters on my palm, mime, charades, and more uses of "thumbs up" and "thumbs down" than I ever dreamed of.

Another path is open to me in the age of the internet. I can talk with new friends all over the world. Writing has always been second nature to me, as satisfying in a different way as speaking. Maybe because I was an only child with lots of solitary time, I always felt the need to write, and read. I was editor of my grade school, high school and college newspapers. I published the "Washington Street News" with a primitive Hectograph system when I was 9 or 10. I was a full-time newspaper sports writer and reporter (not an intern) when I was 16. I am a quick writer. It flows conversationally.

I know I could become fluent in American Sign Language, but the problem is, I need another person who speaks ASL. Selfishly, at this stage in life, I would rather learn to read a new language than speak one.

There is one thing I can do as well as ever. I can write. When I am writing my problems become invisible and I am the same person I always was. All is well. I am as I should be.

After my first stretch in the Rehabilitation Institute of Chicago, I began to write again, a little. After my second, I returned to a nearly normal schedule. This spring during my third rehab, I was able to log onto a wi-fi network and begin writing much more. This year, which has included two major surgeries, I have so far written 170 reviews, 22 Answer Man columns, 28 Great Movie essays (not all yet published), and 37 blog entries.

In May, I began to sense a change going on. At first it was subjective. This autumn it has become undeniable. My writing has improved.

By that I don't mean it's objectively better from the reader's point of view. I mean it has expanded within my mind, reaches deeper, emerges more clearly, is more satisfactory. Sometimes I glory in it--not the quality of the prose, but the quality of the experience. I find myself writing more, because I will return to that zone longer.

I take dictation from that place within my mind that knows what to say. I think most good writers do. There is no such thing as waiting for inspiration. The idea of "diagramming" an essay in advance, as we are taught in school, may be useful to students but is foolishness for any practicing writer. The Muse visits during the process of creation, not before.

At first when I could not speak, I could not read easily, because sedation had undermined my attention span. I was depressed. I could turn on the TV, but why? My wife brought a wonderful DVD player to my hospital room, but I could not make myself watch movies. My life was stale and profitless. I would spend hours in a murky stupor. Knowing I had always been reading a book, my concerned wife began reading to me: Jane Austen, Charles Dickens.

Curiously, my love of reading finally returned after I picked up Cormac McCarthy's Suttree, a book I had already read not long before my first surgery. Now I read it two more times. I was not "reading the same book." I was reentering the same experience, the same occult and visionary prose, the life of Suttree so urgently evoked. As rarely before, a book became tactile to me. When Suttree on his houseboat pulled a cord and brought up a bottle of orange soda pop from the cool river, I savored it. I could no longer taste. I tasted it more sharply than any soda I've ever really had. When Suttree stopped at the bus station for a grilled cheese, I ate it, and the pickle, and drank the black coffee. I began to live through this desperate man's sad life.

Then movies came back, and then writing. Then contentment. I may have things to be depressed about, but I am not depressed. My remaining abilities have expanded to fill the empty spaces left. My life seems full again, almost. I am busy. I am useful. I am happy.

Cyrus Freidheim, the CEO and publisher of the Sun-Times, said he'd like me to try writing a blog. Didn't I already have enough to do? Apparently not. I started writing the blog in April. I looked at the comments. I became involved. I wrote, people wrote back. I started adding remarks of my own after some of the comments. I was in conversation.

Some readers are amazed that I read all the comments. Of course I do. There is no one else to vet them; Jim Emerson is too busy, and besides, after all, they are my comments. See my blog entry "Confessions of a blogger," written in a rush of pleasure about the whole process.

But this entry is not about blogs. It is about my mind and about writing. It is true I still "take dictation." But over the summer and autumn, my mind has started dictating before I am at a keyboard. Ideas and words present themselves at any time. My wife noticed me motionless, and asked if I would like to take lessons in meditation. I replied, "Actually, I'm very happy with my thoughts."

Of course I don't think only about writing. I spend time with my wife, family and friends. I read a lot, watch a lot of politics on TV. But prose is beavering along beneath, writing itself. When it comes time to type it is an expression, not a process. My mind has improved so much at this that it's become clearly apparent to me. The words, as e. e. cummings wrote, come out like a ribbon and lie flat on the brush. He wasn't writing about toothpaste. In my fancy, I like to think he could have been writing about prose.

Yes, I had that cummings line in mind before I began. I knew I was heading for it. By losing the ability to speak, I have increased my ability to communicate. I am content.