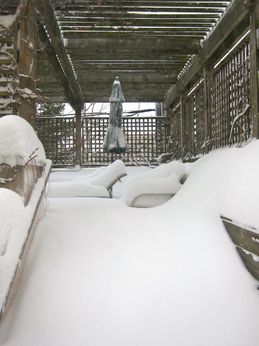 It may be because I live in the city now, but I no longer see children playing for hours in the snow. I remember a pediatrician advising my parents to send me outside to play as a treatment for some "condition." Of course, he later was found to be an alcoholic, so there's no telling.

There were two kinds of snow, powder snow and packing snow. Packing snow was what you wanted for snowballs, snowmen and snow forts. We threw snowballs at one another and at the sides of passing trucks. We built snowmen, pleased by the perfect logic involved in their construction.

I remember an ambitious snow fort built with Steve, John and Chuck Shaw over several days. It had bulwarks and buttresses, lookouts and refuges, and even some kind of tunnel, although in a collapse we risked the danger of suffocation. The fort defended against imaginary enemies, and we crouched behind it firing on them with sticks and making a noise that was not a bang! or pow! but more like a wet spitty skew!

Did we get cold? Did our clothes get soaked? We played so hard we worked up a sweat. As an adult I go outside acutely aware of wind-chill factors, but in those days it was thrilling to open the door on freshly-fallen snow. In grade school I got a paper route and marched through the snow in late afternoon, when it was already dark and the air carried the aromas of dinners being cooked.

Dogs barked from inside houses and sometimes a curtain would be pulled back and a customer would wave. My bag had a canvas flap to keep the papers dry. I reached an age when I felt too old to ride the school bus, and rode my bike three miles across town to St. Mary's in any weather, sometimes sliding down a treacherous slope. In the classroom our gloves and mittens would be soaked, and we'd line them up to dry on the radiators. 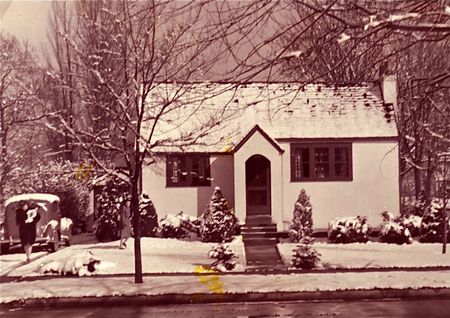 My mother in front of our home.

In January 1967 Chicago was struck by a great blizzard, and life changed for weeks. It was March before I could clear my car from snow drifts. For several day one of the two tracks of the Illinois Central commuter lines was blocked, and a single train shuttled back and forth between South Shore and the 12th street station, carrying refugees, milk and bread.

The newspaper's Channel 32 news used reports from a remote camera in our city room, and Dick Foster, on the overnight shift, sat on the City Desk and read the temperature from the Cutty Sark billboard where the Hyatt Chicago now stands. Cars on Lake Shore Drive were stopped in their tracks by drifting snow, and motorists were trapped or risked trekking out for help. The snowfall came to 23 inches.

It was an apocalyptic event. All certainties vanished. I had never given much thought to milk and bread and often had neither in my house, but now like other Chicagoans I found myself compelled to lay in supplies. There was a strange cheerfulness abroad, as if the heavens had made our everyday concerns irrelevant and demonstrated our common dependence. Small groups of young men tramped the streets, pushing stuck cars and refusing payment.

During our great storm of this week I remembered 1967 and stayed on on city streets while driving to and from a 7 p.m. screening of "Sanctum." The weather forecast had been precise and the outlook was obvious, but the studio refused to schedule a daytime screening -- perhaps relieved fewer critics would see it, or, in Los Angeles, unable to take snow seriously. Later I found that the city had forgotten the lesson of 1967, Lake Shore Drive was not closed in time, and foolish drivers attempted it and were stranded overnight.

In the 1950s, my Uncle John O'Neill and my Aunt Mary stood up from Christmas dinner at my grandmother's house and started their annual drive down to Fort Lauderdale, not to return until March. "Oh, honey, I can't tolerate winter," Mary would tell me. I have always found the cycle of the seasons reassuring. One year at Cannes I was told by Tony Curtis, born in New York, that the problem with living in Los Angeles was that without seasons it was always the same year: "You go to sleep by your pool one afternoon, and when you wake up you're 60."