Why I'm so conservative 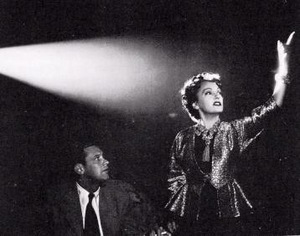 For some time past I've realized I am profoundly conservative. No, not in my politics. In my thinking about the movies, and particularly about how best to experience them. This may be a character flaw, but I cherish it, and believe it helps my criticism. I adhere to the notion that the best way to see a movie is by light projected through celluloid onto a large screen in front of a sizable audience that gives it their full attention. The key words here are projected, celluloid, large screen and attention.

Let's go through those one term at a time:

Projected. I somehow feel it is right for the movie to originate behind me. In a strange way, it seems to be originating inside my mind and expressing itself on the screen, rather than originating on the screen and approaching me.

Celluloid. Film carries more color and tone gradations than the eye can perceive. It has characteristics such as a nearly imperceptible jiggle that I suspect makes deep areas of my brain more active in interpreting it. Those characteristics somehow make the movie seem to be going on instead of simply existing.

Large screen. My formative movie experiences took place in large theaters. We still use one of them, the Virginia in Champaign-Urbana, to host my Ebertfest. It has an orchestra pit, an organ that rises into view, a balcony, and 1,600 seats. Many directors, even famous ones, have told me, "I've never seen my film on a screen this big, with an audience this large." Unless they were invited to major film festivals, that is probably true. We show a 70mm film every year, which makes me realize how the format is half-wasted on a multiplex screen.

Norma Desmond: "I am big. It's the pictures that got small."

Attention. By this I do not necessarily mean total silence. At the Saturday matinees of my childhood, I enjoyed Westerns and comedies in the midst of tumult. More recently, I had a great time at a screening if "There's Something About Mary" where one man began laughing so hard he fell out of his seat. Only time I've ever seen that actually happen. He had to be assisted outside by his wife. My theory is, every movie gets the audience response it deserves--when it has a voluntary audience that has paid admission to get in. Freebie screenings by radio stations are notoriously noisy, because they often reflect a demographic the studio only hopes it will attract. "Attention" means silence, however, when the film deserves and earns it. I once saw "The Silence of the Lambs" with a chattering audience looking forward to a "horror movie." In ten minutes, the audience was mesmerized.

A subcategory of "attention" may apply to the modern annoyance caused by moronic narcissists who use cell phones or do text messaging during a film. This is growing more common, and recently the Answer Man reprinted an eyewitness movieweb.com account by a writer who sat next to a newly famous film critic who used his cell and processed text messages during virtually an entire movie.

But let's back up to the big picture, so to speak. Anyone like me who prefers light through celluloid in a big theater is obviously a conservative. (Dictionary definition: "holding to traditional attitudes and values and cautious about change or innovation") At least these days I am only a nostalgic conservative. I started out as a hidebound conservative. In the earliest days of home video, I published an article in The Atlantic calling for a "wood-burning cinema." In recoil from the picture quality of early tapes, I called for the development of low-cost 16mm projectors for the home. No, this didn't have the invisible quotation marks of satire around it. Seldom has a bright idea of mine been more excitingly insane. Today I considered reading the piece again and decided, no, I don't think so. I'd rather watch a Blu-Ray movie on my big HD screen.

Now we have the reality of HD in the home, and very high quality video projection in theaters. I held out against video projection for years, when it really was pretty shabby. Now I acknowledge it is pretty damned good. I prefer to see a movie in a theatrical setting but love my home setup. It kept me in business when I was getting up speed after my illness. Is my preference for celluloid only sentimental? Partly. I no longer instantly know if a movie is being projected digitally. My subconscious may be losing something, as I suggested, but consciously I'm not aware of missing much. That said, it is still true that no digital projection can match 70mm, and I continue to yearn for the dream of MaxiVision 48, which exists in an altogether higher realm.

If there is still a chance for MaxiVision, it would be because of thecost: Less than $15,000 per screen for a new front end on existing projectors. Yes, the film cost is 50% percent higher, but (1) after a certain budget point, the cost of film is insignificant, and (2) Maxivision projectors are backward-compatible for conventional 35mm. On the other hand, the costs of going digital would be mostly borne by the theaters, which already hand over up to 90% of ticket sales to distributors.

The cost of digitizing the nation's theaters has been estimated at $135,000 times 36,000 theaters, which would be $450 million. Of course almost all current-day theaters have more than one screen; the cost for my local 20-screen multiplex might be $2.7 million. Nation-wide, we're talking billions. However the cost of digital projections can be expected to drop sharply, according to my amateur's understanding of Moore's Law. The historic print and distribution costs of studios run very high. And the foreseeable future, banks will not be lining up to lend money to the movie industry, because of the credit crisis.

Enough of my math, which is quite probably flawed in some way. Back to my conservatism. I love silent films. I miss radio drama. In some matters, I feel almost like a reactionary. I love books, for example. Physical books with pages, bindings, tactile qualities and even smell. Once a year I take down my hardbound copy of the works of Ambrose Bierce, purchased for $1.99 by mail order when I was about 11, simply to inhale it. Still as curiously pungent as ever. I summarily reject any opportunity to read a book by digital means, no matter how fervently Andy Ihnatko praises his Kindle. Somehow a Kindle sounds like it would be useful for the wood-burning cinema.