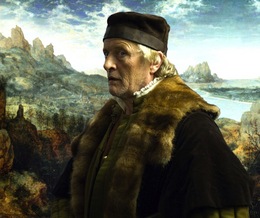 I was watching a movie this week, a very good one, that will open Friday here in Chicago. As sometimes happens, it led me into a realm of thinking that was not directly connected to it--or perhaps it was.

The movie is "The Mill and the Cross," by the Polish director Lech Majewski. It literally enters into a famous painting, Bruegel's "The Road to Calvary," and walks around inside of it.

How often do we find ourselves entering a painting? Sitting on Van Gogh's bed? The discovery of perspective encouraged us to think of paintings as spaces available to us.

The title suggests the execution in this case is of Christ; the painting transposes his Crucifixion into another land and time. The theme is the same: Death justified by invaders on religious or nationalistic grounds. But Christ is not the central figure of the painting; the group around the christ-figure are part of hundreds of figures, most of them not concerned. 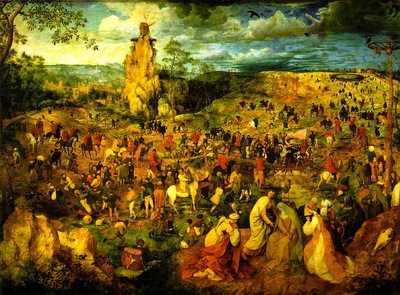 This is a theme found in another famous Bruegel painting, "The Fall of Icarus," concerning the legend of the young man who built wings and attempted to fly. He flew too close to the sun, which melted the wax in his wings, and he fell to his death in the sea.

This painting is also a vast land and sea scape in which the event in the title is simply a detail in the busy rush of life--two legs disappearing into the ocean, easy not to see. Bruegel is in reaction to the tradition of narrative painting where the subject is the focus of attention. His painting shows the full sweep of Fleming society, of people and animals going about their daily affairs, most of them unaware of the great event that is taking place. 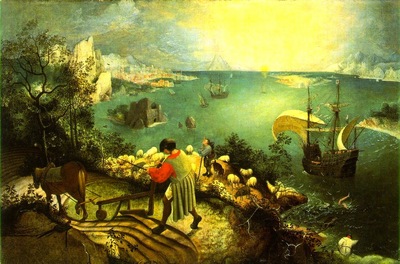 Of the film's extraordinary artistry and beauty I will write in my review. My concern today is with the way the film selects one detail in the canvas and explains it. On the right side there is a pole fixed in the ground with a wagon wheel attached to its top. From this wheel something is hanging. A black bird attends it.

In a sequence of the film, we learn the story. We meet a young farmer and his wife, cozy and loving in bed, who rouse themselves and have their breakfast. Then, from a pen that's part of their small home, they release a brown and white calf. The wife nuzzles the beast affectionately. They set off with it to market, for it is the destiny of some farm animals to be sold.

In the film we see men under Spanish command searching a forest for a tree tall and strong to make a pole. They chop it down, trim it and haul it to the plain where the painting is set. Then the Spanish chase down the young husband and his wife, and begin to whip and beat him. Finally they strap his body to a wheel, attach it to the pole, and hoist it into the sky. The sun beats down mercilessly and the wife weeps piteously at the base of the pole, as carrion birds pluck out her husband's eyes. 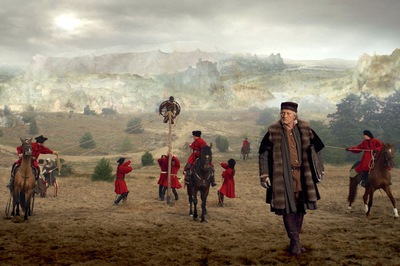 In the backgrounds of some of the art I have reproduced here you can see such poles; in all but one, you might have missed them. The film constructs a three-dimensional reproduction of the painting, in which the wheel on the pole is but an insignificant detail, much smaller than in the painting itself. Now we know what it is. This execution appalled me. We assume the man is being executed for being a Protestant, but the film explains nothing in so many words. Its focus is more on Bruegel (Rutger Hauer) and his patron (Michael York) planning the painting.

Capital punishment is cruel enough. Sometimes it is justified on the basis of crimes. More often, probably, it takes place as a punishment for the religion, politics, race or nationality of the victims. Mass graves are uncovered all over the world, filled with those who paid with their lives for who they happened to be.

Often, ultimately, such murders are justified with reference to God. Sometimes the god is a political despot or a criminal lord. What concerns me is why suffering is so often considered to be necessary before death. A beheading, a hanging, a firing squad, an electric chair, a gas chamber, these are straightforward enough. But to be subjected to hours of unspeakable torment? 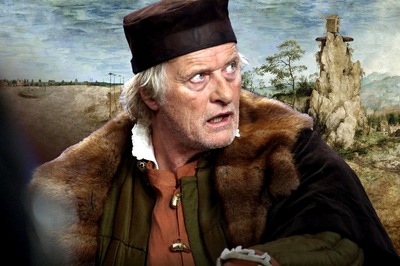 In nature, all sorts of creatures kill one another, usually for food, dominance or territory. Inflicting torture seems to be uniquely human. Why do we do it? Why do we stand by and watch it done? In the film, Majewski shows the ordinary people of that time looking on passively as these events take place. They're not happy about them, but they seem to accept that this is the way things are done.

Humans feel empathy. We don't know to what degree animals share it; to some, certainly. We know how it must feel for someone to be treated with such cruelty. Is that necessary for some of us? Is it true only of psychopaths? Is it intrinsic in human nature? All of us know how suffering feels. Only some of us willingly inflict it, although under the pressure of an army, a gang or a mob, more do.

I have no answer for my questions. The thought of that young man strapped to the wheel stays with me. The lovable calf wandering at the foot of the pole: Where is my master? I know that every day in countless ways humans are tortured in countless ways. Why do we do this? Why isn't there more kindness in our nature?

The Making of "The Mill & The Cross" from Storefront + Bench on Vimeo.