What do you mean by a miracle? 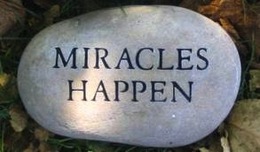 I'm not a miracle. And neither are the Chilean miners. We are all alive today for perfectly rational reasons. Yet there is a common compulsion to describe unlikely outcomes as miraculous -- if they are happy, of course. If sad, they are simply reported on, or among the believing described as "the will of God." Some disasters are so horrible they don't qualify as the will of God, but as the work of Satan playing for the other team.

The 9/11 tragedy, for example, was described by very few as the will of God, although many blamed it on Satan, and Pat Robertson briefly believed it was God's way of punishing us for our sins. Within Al Qaeda circles, of course, it was seen as the Will of Allah, and, given the competence of the first-time jet pilots, perhaps qualified as miraculous.

Like so many of us, I watched with joy as the miners emerged from their tomb, one after another. In a year of sadness, it was a blessed moment. One can sympathize with those who called it a miracle, but actually it was the result of perfectly understandable engineering techniques. The construction of the mine itself, so deep in the earth, was a much more impressive feat, but no one thought to describe that as a miracle. 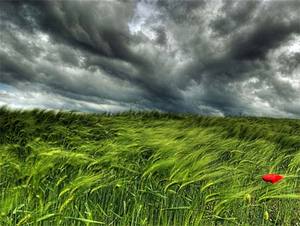 How much better to describe the rescue as the result of the fortitude of the miners and the skill of the good-willed people on the surface who reached them in what was, after all, a very short time. How much better to say the outcome in Chile was the result of intelligence and good will. But there seems to be a narrative in these matters that requires the citing of divinity. Newscasters, victims and their families alike praise the powers above. This reassures us -- of what? That everybody knows the script.

In my case, I was perilously close to death after my carotid artery ruptured. I have written before about how my surgery was completed, the reconstruction was a success, and I was all packed and ready to go home. Some of my doctors and nurses had gathered in the room to wish me well. I had my iPod, and played them a song I loved to play to Chaz: "I'm your Man," by Leonard Cohen. It's a long song, and a good thing it was, because while it was playing my artery ruptured, and right there in the room were the very people needed to fight for my survival. If I'd forgotten the Leonard Cohen song, Chaz sometimes reflects, we would have already been on Lake Shore Drive, and I would surely have bled to death. 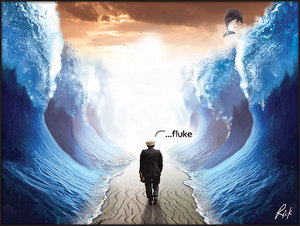 So, was that a miracle? Or do I owe thanks to Leonard Cohen? Or should I thank myself for being such a goofy romantic that I wanted to crank up the volume on the iPod speakers and play the song? Or should I thank Chaz for inspiring "I'm Your Man" feelings in my heart? If I was saved through a miracle, how should I describe the vascular accident that nearly killed me?

Here's how I think of it: Those events are the ones that happened. One can easily imagine a different series of events. Indeed, we are alive at this moment, me writing, you reading, because of a series of unlikely events reaching back to the dawn of life. The odds against any of us being here at this moment are staggering. Imagine that a refrigerator falls out of a window and misses us by 10 feet, sparing our life. Now imagine that refrigerator as any cause of death, and realize that it missed every single one of our ancestors back to the beginning, including the time the refrigerator looked like a carnivorous reptile and we looked like a tasty sloth.

Although miracles are recognized by most faiths, the term itself comes down to us through the Roman Catholic line of descent, which is largely responsible for most of the content of all Christian denominations. A miracle, in the Catholic notion, is not just any old unlikely and happy event. It must be "inexplicable by natural or scientific laws," and therefore can be assumed to be the work of the divine. The footnote here is that we are learning more about natural and scientific laws all the time.

The Old Testament reports such miraculous events as the parting of the Red Sea. It was not Moses, however, who caused the waters to part, despite various Hestonian memories we may share. Exodus ascribes the parting to God. It is not really until the New Testament that you have a man performing miracles -- and then only one man, Jesus. The question occurs, if he could raise one man from the dead or heal one leper, why stop there? The explanation, as I recall from my catechism, is that death is part of God's Plan, and that Jesus performed miracles only for the purpose of demonstrating that he was the son of God and therefore had supernatural powers. In Catholic theology, a miracle must be "above, contrary to, or outside nature." Therefore, theologically, the lives of the miners were not preserved by a miracle, but Lazarus was. 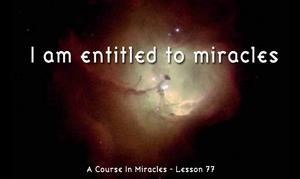 It is important to observe that the effects of the sacraments, for example, are not miracles. It is not a miracle that the body of Jesus is present in the communion wafer, for God so ordered that result at the Last Supper, which we reproduce when we celebrate the Mass. Therefore, the divine presence is in the natural order of God's law. When events occur that stand outside both nature and God's law, then they are miracles, and their purpose is not the immediate one -- raising Lazarus, for example -- but the larger one of revealing and demonstrating the glory of God.

This is why the Church takes such pains to test miracles. It is a good thing, the Church believes, for a false miracle to be disproved, because Truth is therefore served. Since God can do nothing deceitful, playful or misleading, such events cannot be his work. 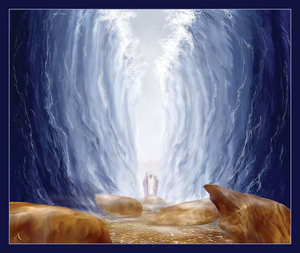 It's well known that the Church requires three miracles to be attributed to a person before he can be declared a saint -- that is, a person who is now definitely in heaven with God. These miracles are not lightly attributed, and a so-called Devil's Advocate is appointed to argue against sainthood, and to examine reported miracles for evidence of error, fraud, mistaken perception, and so on. The Church is active in seeking people to serve as a Devil's Advocate. It is well known, for example, that Christopher Hitchens considers Mother Theresa a fraud. Not so well known is that the Church actually solicited his testimony in considered her claim to sainthood.

A saint having been determined to be in heaven is assumed to be enveloped in the presence of God. Catholics pray to saints in the hope they will "intercede" with God to bring about a desired result. Thus it is mistaken to claim Catholics pray to statues or relics; their prayers are directed through the saints represented, and can only be answered by God himself. 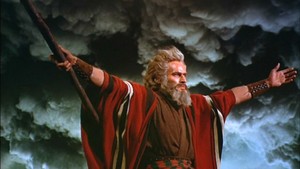 Why do I focus on Roman Catholic theology? It is the basis of all Christian theology, and from the days of Aquinas has tried admirably to build on logical reasoning. Much modern Protestant theology proceeds from and builds on similar reasoning; fundamentalism is considered to be outside this tradition, and is essentially a new theology. I prefer formal Catholic theology and its modern Protestant refinements because it is based on reason and not simply unquestioning blind faith -- although of course you must begin with the faith that there is a God at all.

Such theology is a help is clarifying what we're really talking about. When we casually describe good outcomes as "miracles," it would be useful to define what we mean by a miracle, and be able to defend our "miracle" in those terms. That is why precision in language is useful. Einstein observed, "Whoever is careless with the truth in small matters cannot be trusted with the important matters." 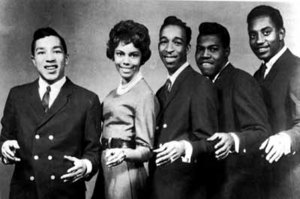 That puts me in mind of all the arguments against evolution that depend on a complete ignorance of the definition of a scientific theory. But let's not go there today. Returning to the subject, what has all this to do with my carotid artery, or the Chilean miners? I argue that few people have a good idea of what a miracle actually is. It's not like entering the lottery. God doesn't perform miracles for a few lucky winners. They take place for one purpose only, and that is not to spare lives, cure disease, heal limbs or prevent a bus from falling off a mountain. Their only purpose is to demonstrate the glory of God. They're sort of wake-up calls: "Hey, people, this is Me up here on the mountain top, hurling these lightning bolts."

Do I believe in miracles? No. I believe any event we observe can be explained by natural or scientific laws. Seemingly miraculous events in history might have been explained at the time, if there had been better knowledge. And at this moment, our knowledge is very far from complete, but I believe it is growing.

Arthur C. Clarke famously said, "Any sufficiently advanced technology is indistinguishable from magic." It is also true that an apparent miracle can be explained because our knowledge of its natural cause is inadequate. For the Church to declare anyone a saint, I presume, is possible because the Devil's Advocate (that is, mankind) does not yet possess sufficient knowledge.