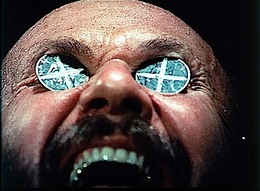 Donald Pleasence in "Wake in Fright"

I always try to find at least one film at Toronto that's way off the beaten track. I rarely stray further afield than I did Tuesday night, when I found myself watching "Wake in Fright," a film made in Australia in 1971 and almost lost forever. It's not dated. It is powerful, genuinely shocking, and rather amazing. It comes billed as a "horror film," and contains a great deal of horror, but all of the horror is human and brutally realistic.

The story involves a young school teacher in the middle of the desolate wilderness of the Outback. The opening overhead shot shows a shabby building beside a railroad track, the camera pans 360 degrees and finds only the distant horizon. and then returns to find a second building on the other side of the tracks. One building is the school. The other is the hotel. To get to either, people must have to travel a great distance.

It is the end of the school year. The teacher (Gary Bond) takes the train to a small town where he plans to get a flight to Sydney. He loses his money gambling, and is swept up in the vortex of a group hard-drinking, hard-living, crude, vicious men. His "vacation" descends into drunkenness, brutality, rape and a gruesome moonlight hunt where they massacre kangaroos.

This was the second feature by the Canadian director Ted Kotcheff ("The Apprenticeship of Duddy Kravitz"). It was received with hostility in Australia, flopped at the box office there, did well overseas, was an official entry at Cannes, and then seemed to disappear. It became known as "Australia's great lost film." Its editor, Anthony Buckley, began a search for it, and found one surviving print just as it was scheduled to be destroyed. It has been restored by the Australian Film Archive, and will be available on DVD on Nov. 4. 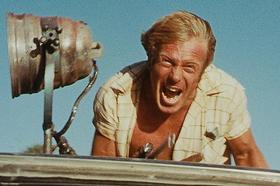 Jack Thompson in "Wake in Fright," his first film

According to Australian critics, the film was originally reviled because it painted such a horrifying portrait of life in the isolation of the Outback -- life making our own Old West look positively civilized. "Deliverance," made a year later in 1972, is mild by comparison. Kotcheff's film is raw and uncompromised, well acted, brilliantly photographed and edited. Animals were certainly "harmed." Footage of an actual kangaroo hunt was seamlessly edited in by Buckley, and a "producer's note" says this documentary footage was included with "the participation" of animal rights organizations, whatever that means. It's rare to find a film that goes for broke and to hell with the consequences.

I've viewed 20 of the films playing at Toronto this year, give or take a few, not counting those I saw at Cannes. Here are a few more I want to tell you about:

"Applause," from Denmark, centers on an extraordinary performance by Paprika Steen, as it follows a divorced alcoholic actress in her spiral down into her addiction. She plays a great actress but a damaging wife and mother; the looks on the faces of her children when they unexpectedly see her tell the whole story.

The director, Martin Pieter Zandvliet, seems to know much about alcoholism, and shows Thea, the actress, yawning through a single AA meeting and then trying to quit cold turkey on her own. Will power is a dangerous thing for an addict to depend upon. Zandvliet uses a creative strategy for depicting Thea's married life; he shows her in close and medium shots playing the heroine Martha in "Who's Afraid of Virginia Woolf." Sometimes she's drunk onstage, sometimes not, but she always plays Martha well. It's a role, you could say, Thea was born to play. 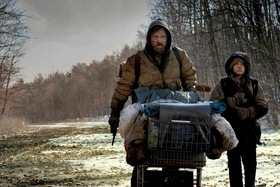 Viggo Mortenson and Kodi Smit-McPhee in "The Road"

"The Road" adapts Cormac McCarthy's bleak novel of post-apocalyptic despair into an equally bleak film, as a father and his son trek across the wasteland of a destroyed America. John Hillcoat's direction expertly reproduces the desolation described by McCarthy, although Viggo Mortensen and Kodi Smit-McPhee, as his son, don't look quite as starving and lice-ridden as probably they should.

I can't imagine a different way of approaching this material. If the film lacks the impact of the novel, it may be because McCarthy resists being adapted. With him, it is all in the language -- the poetry of the language. With a writer like Shakespeare, you can use the language, because it's spoken. But McCarthy's dialogue, distinctive as it is, fails to represent the complexity and beauty of his descriptive passages. And with him it is never about what happens, but how he describes it. I question whether his Suttree and Blood Meridian can be filmed at all.

"The Joneses" is a film as superficial as it is deep. I intend that as a compliment. If you're not aware of the premise, skip to the next film. We meet an attractive American family as they move into their expansive new suburban home. The parents are played by David Duchovny and Demi Moore, and their teenage children by Amber Heard and Ben Hollingsworth. The Jonses are not real people. They're a highly-paid "unit," chosen for their attractiveness and charisma, and intended to influence the consumer lifestyles of those they come into contact with.

In a way, this is the ultimate product placement movie. Every consumer product in the film, from golf clubs to sports cars is branded and extolled as desirable. The Jones have all done this gig before and will do it again; Duchovny is Moore's sixth "husband." The dilemma is, can you live with someone and not run the risk of falling in love with them? And what is it worth someone to live this lifestyle? What responsibilities come along? Sure, they pay you well. But no one knows better than you that all money can do is buy you...stuff.

"Coco Before Chanel" stars Audrey Tautou, who is rather amazing. Yes, she was loved in "Amalie," but we had no idea. Here she plays Coco Chanel in many of the years also covered in the forthcoming "Coco Chanel and Igor Stravinsky" an excellent biopic selected for Cannes 2009. To compare the two films should be interesting. 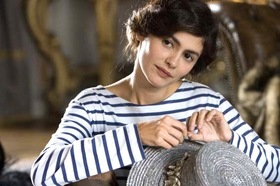 Coco Chanel, as is widely known, invented herself out of whole cloth before starting on her fashions. Abandoned to an orphanage by her father, she was singing in cabarets in her early teenage years, became the underage mistress of rich man (who really did love her), and determined to become a fashion designer when an independent woman doing such a thing was unheard of. The director, Anne Fontaine, made the considerable films "How I Killed My Father" (2002) and "The Girl from Monaco" (2008), and shows a particular feel for women making their own way in the world. Here she uses Tautou to show Chanel over a span of 20 years, from urchin to icon. Even someone like me, uninterested in fashion, found it engrossing.

"The Hole." Now forgive me if I bring up once again the tiresome subject of 3-D. Of the content of Joe Dante's new horror film I will write nothing until it opens. Of the choice to use 3-D, you can't stop me. The 3-D process in this film is the best I've seen in live action, and that includes the preview footage of "Avatar." It's technically impeccable. It makes no contribution to the overall experience.

Now that I've see live action 3-D done as well as it's likely to be done for some time. I realize more than ever this truth: The 2-D process creates a perfect illusion of depth. The 3-D process interferes with that achievement by adding additional information that reduces the illusion of depth, creating distinct planes within the image which our minds are forced to recognize and process. If there is a future for 3-D, and I hope there isn't, it's in animation, which isn't supposed to look real in the first place, and not in live action, where it's a distracting abomination. If you're a director with something to say, don't let your process interfere.

Trailer for "Coco Before Chanel" (in French)