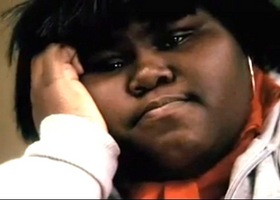 "Precious: Based on the Novel Push by Sapphire," the story of a teenage girl who seems to have everything going against her, won the coveted Audience Award here Saturday at the Toronto International Film Festival. Toronto has no jury awards, but last January at Sundance, "Precious" swept both the jury award and the Audience Award. Both festivals invite audiences to vote as they leave after a screening, and use systems to correct for audience and theater sizes.

This could not be a better omen for the Oscar chances of "Precious;" it is all but certain to win a place on the expanded list of the Academy's 10 "best picture" nominees. Its star, Gabourey (Gabby) Sidibe, is also a real possibility for an acting nomination.

It is perhaps an omen that last year's Audience Award winner at Toronto was "Slumdog Millionaire," which went on to win the Oscar as Best Picture. That would be a storybook case of life following art. In the film, Sidibe plays a young African-American girl who is fat, illiterate, has painfully low self-esteem, has been abused and raped at home, and is pregnant with her second child. In school, she tries to appear invisible and is reluctant to speak. But in her fantasies she imagines herself as a glamorous fashion model and famous movie star.

I no longer do Red Carpet interviews before the Oscarcast, and what I will miss most next year will be the opportunity to talk with Sidibe on her way into the Kodak Pavilion. I talked with Gabby at Toronto, and found her quite unlike her screen image. She's a college graduate, articulate, quick to laugh, with good comic timing, and considerably more attractive than the sullen, fearful girl she plays in the film.

The official title of the movie is "Precious - Based on the novel Push by Sapphire." The book became a best-seller with its raw, painful but inspiring portrait of a girl who undergoes a frantic change because of the perception and sympathy of a teacher (Paula Patton) and a social worker (Mariah Carey, almost unrecognizable). It also benefits from a powerful performance by Mo'Nique as Precious's mother, and she, too, is an Oscar possibility. 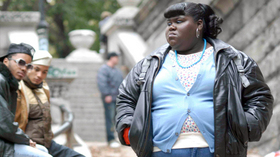 The movie was directed by Lee Daniels, who already has an impressive track record. He produced "Monster's Ball" (2001) and "The Woodsman" (2004) and co-produced and directed "Shadowboxer" (2005).

After its splash at Sundance, the film found two influential backers in Oprah Winfrey and Tyler Perry, who both signed on as executive producers. At Toronto, both said they could relate to elements in the story in their own childhoods; Winfrey said she teared up at the end when the dedication appeared on the screen: To precious girls everywhere.

This year's festival introduced two additional Audience Awards, for favorite documentary and the favorite entry in TIFF's popular Midnight Madness program. The top doc was Leanne Pooley's "The Topp Twins," about a New Zealand lesbian C&W singing duo, Sean Byrne's "The Loved Ones," from Australia, a horror comedy based about a teenage girl.

The award for best Canadian feature went to "Cairo Time," by Ruba Nadda. It stars Patricia Clarkson as the wife of a Canadian diplomat who finds herself waiting for him in Egypt, and is shown around by his old friend Tareq (Alexander Siddig). Certainly not intending to, they fall in love.

There was a special citation to Quebec director Bernard Émond for "La Donation" (The Legacy), about a Montréal doctor who is asked to take over the rural practice of a retiring colleague.

For a festival without an official jury, Toronto gives out a lot of prizes at its annual awards brunch. Other winners announced Saturday were:

The FIPRESCI Discovery Prize, voted by members of the International Federation of Film Critics, to Laxmikant Shetgaonkar of India for "The Man Beyond the Bridge."

Trailer for "La Donation," which won a special citation for director Bernard Émond

Oprah and Mariah on the "Precious" red carpet