I have seen the new 3D version of "Titanic" and, as with the original 1997 version, I found it a magnificent motion picture. The hour or more after the ship hits the iceberg remains spellbinding. The material leading up to that point is a combination of documentary footage from the ocean floor, romantic melodrama, and narration by a centenarian named Rose. The production brings to life the opulence of the great iron ship. Its passengers are a cross section of way of life that would be ended forever by the First World War. In a way, the iceberg represented the 20th century.

Its unsinkability perhaps explains why Capt. Edward John Smith (Bernard Hill), despite being warned of icebergs, cranked the ship up to its top velocity and left it speeding blindly through the night. Would the captain of any other vessel have felt confident in doing that? In a larger sense, many of those on board thought of themselves as unsinkable, including the millionaires John Jacob Astor and the fictional villain Caledon Hockley (Billy Zane). Astor called for a brandy and went down with the ship. Hockley would have thrown women and children overboard to preserve himself. Also on board was the Denver millionaire Molly Brown (Kathy Bates), who survived and is known to history as the Unsinkable Molly Brown. She's shown as one of the few arguing that her lifeboat turn back to rescue passengers freezing to death in the icy water. 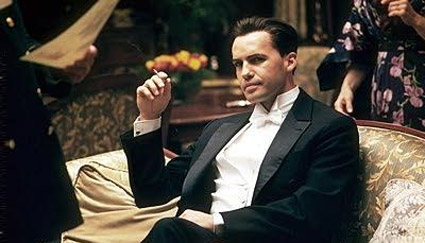 Here already I have fallen prey to Cameron's storytelling, and have become distracted from the ship's fate by the fates of those on board. Of greatest interest to us are Rose DeWitt Bukater (Kate Winslet), who is engaged to the snaky Caledon Hockley, and Jack Dawson (Leonardo DiCaprio), a steerage passenger who falls in love with her onboard and saves her life. She is the same Rose, known now as "Rose Dawson," who is the old lady, the sole living survivor, brought on board a salvage vessel near the beginning of the film (she's played by Gloria Stuart, who was 86 when the film was made, and topped 100 before she died in 2010). This old women, with such spirit and old, wise eyes, provides "Titanic" with what seems impossible: A happy ending. It is happy for her, at least, because she finds closure with the recovery of a drawing made by Jack and a final scene involving a famous diamond. 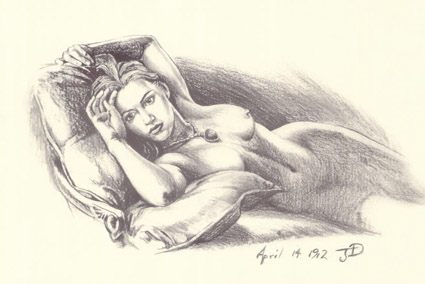 The class differences onboard become a matter of life and death. The lifeboats are reserved for first class passengers, and those in steerage are locked below behind sliding gates. Crew members enforce these distinctions, sometimes at gunpoint; so loyal are they to their employers that, even though they're going to die, they feel no sympathy for their lower-class comrades. In an early scene, it is by sneaking up to the first class deck that Jack saves Rose from jumping off the ship. She has decided she prefers death to a life among affluent snobs like her fiancée; this shows she has more principle than imagination. Jack becomes the hero only because he flaunts all class distinctions, a decision that has its roots deep in 19th century melodrama. 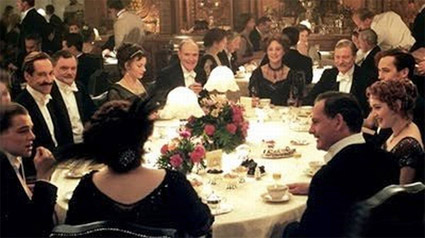 Now to those "flaws." Both of them involve the behavior of characters. There are several scenes involving Jack trying to help Rose escape the sinking ship, and then Rose helping free Jack after he's handcuffed to a pipe in a cabin, and then Jack again helping them to escape. Consider Rose. Of her own volition, she leaves the safety of a lifeboat and dashes back into the bowels of the ship to find Jack. She wades through water up to her waist, slugs an unhelpful crew member on the jaw, finds Jack, and then finds a fire ax to break the chain of his handcuffs. Plucky, yes? But in all their other escape scenes, Jack pulls her behind him while desperately shouting Rose! Up here! Rose! Down there! Rose! Follow me! et cetera. This grows monotonous and tiresome. It reminds me of one of the early definitions in Ebert's Little Movie Glossary, the "Me Push-Pull You." That's an adaptation of a friend of Doctor Dolittle's, the "Pushmi-pullyu." I define it as a male who treats a woman as a wee helpless creature who cannot save herself but must be pushed and pulled. Given Rose's behavior in finding her way through the flooding ship while saving Jack, she seems capable enough to be allowed the occasional Jack! Up here! 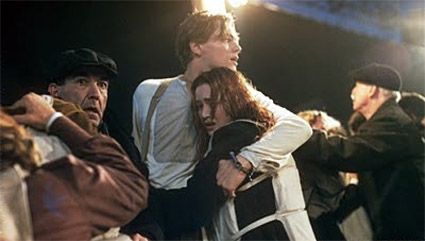 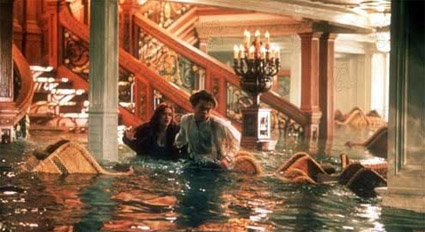