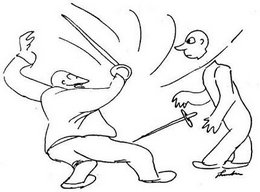 The most perfect cartoon caption I've ever seen was created by James Thurber, and ran in the New Yorker in 1932. It showed two fencers. One had just sliced off the other's head. The caption was: Touche! You may know some that are funnier. What bothers me is that I will have written none of them. I have entered the New Yorker's cartoon caption contest almost weekly virtually since it began, and have never even been a finalist. Mark Twain advised: "Write without pay until somebody offers to pay you. If nobody offers within three years, sawing wood is what you were intended for." I have done more writing for free for the New Yorker in the last five years than for anybody in the previous 40 years.

It's not that I think my cartoon captions are better than anyone else's, although some weeks, understandably, I do. It's that just once I want to see one of my damn captions in the magazine that publishes the best cartoons in the world. Is that too much to ask? Maybe I'm too oblique for them. The New Yorker's judges seem to live inside the box, and too many of their finalists are obvious--even no-brainers, you could say.

Example. An executive is seated at a desk, interviewing a giant lobster. Winning aption: "And why did you leave your job at Red Lobster?" I mean, come on! That's level one. It's obvious. It's not even funny. Let's work together on this. Let's try lateral thinking. A perfect caption should redefine the cartoon, and yet seem consistent with it. 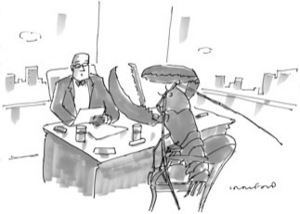 It's too late for me to enter, but here, with the advantage if hindsight, are some captions for Cartoon #1:

"You fit right into our push for diversity."

"We're looking for someone with hands-on experience."

"Would you be willing to start at the bottom?"

"Times are hard all over. The applicant before you was Long John Silver."

Okay, okay, they may not be brilliant. But better than the winner? I'll let you decide. The New Yorker's panel of judges apparently sifts all the entries and chooses three finalists, from which the readers vote for one. I can imagine it's a thankless task to read hundreds or thousands of cartoon captions a day and keep your sense of humor. I knew Playboy's "Party Jokes" editor, who is now a famous film director. If you ran into him on the street, you didn't want to tell him a joke.

Now study Cartoon #2. Two men in lab coats discussing four mice in lab coats. This one has countless possibilities, and the winner was pretty good ("O.K., let's slowly lower in the grant money"). But let's think outside the box:

"They've split up into twos. Now what is that telling us?"

"After 961 generations, they still find something to talk about."

"They're graduates of a small medical school."

"Michael Bay is introducing mouse traps into the movie version." 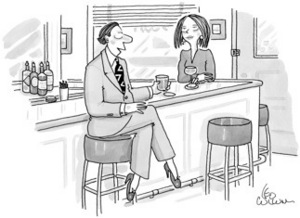 My entries may not be great. But they were fun to write. Tell me what I'm missing. Now #3, also with a number of possibilities. The winner: "Actually, I'm not crazy about long walks on the beach." Not bad. How about:

"I find a certain sweet melancholy in daytime drinking."

"I am large. I contain multitudes."

"My moms were the happiest couple I've ever met."

"Hell, with the campaign committee buying my clothes, even I could run for vice president and win."

"I promise you one thing. Cormac McCarthy has a dark, dark vision." 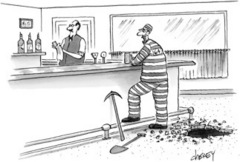 What you can do sometimes is apply a line that would be perfectly reasonable in an ordinary situation, and elevate it with the power of the drawing. But Cartoon #4 is not an ordinary situation. It combines two common images in cartoon--a guy talking to a bartender, and an escaped prisoner--so how about this?

"If my wife calls, tell her I was sent to prison back here, oh, around about six months ago."

"And the same for Mr. Madoff."

"I'm beginning to confront the possibility that I have a drinking problem."

"And when I say dry, I mean, three shots of gin in a glass, and let the sun shine into it through a bottle of vermouth." 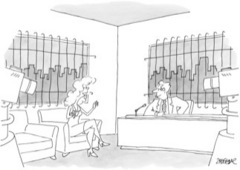 With #5, we have an illustration that seems to demand some reference to the bars on the studio set. The winning entry was "Both the movie and I will be released this summer," by Lawrence Wood of Chicago, who has won the contest three times, inspiring my sincere envy. My entry keyed off the bars, and went something like ths:

In retrospect, I'm not amazed the New Yorker didn't accept that entry. Second place went to "it's my first time on 'Celebrity Parole Hearing." 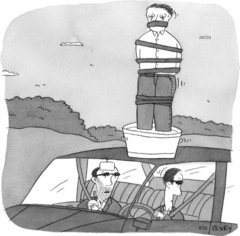 The natural inclination with #6 is to focus on the guy on the roof. This is understandable. Does the mob, by the way, still use concrete overshoes? I decided to focus on the two guys in the car.

"The price of regular has started going up again."

"That fast food will kill you. I'm up for a sit-down meal."

"If Lady Bird could only see what happened to her campaign against billboards."

"The kids have been screaming and yelling about being taken see 'Transformers' tonight."

Now take a good look at #7. Click on it to get a blow-up. Where is it set? Heaven. What are the men sitting on? Eggs. Who are they? Spouses, I say. 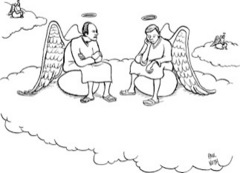 Now ask yourself, what popular film was about males sitting on eggs for an eternity? "March of the Penguins," about how male penguins incubate their eggs during the long Antarctic winter, while the females go to the sea and gorge on fish. It would have made it easier on the males if they have evolved the ability to nurse their young, but there you have it. For one species, childbirth is not the most uncomfortable thing about childbearing.

It's getting to be about that time of year when our wives will return with the manna.

A shot and a goal, I thought. Mine wasn't even a finalist. None of the three finalists took the eggs into account. They were: "I always figured Hell would be less ironic," "Why did you think angels had wings?" and "It's not the tedium. It's the uncertainty." Sigh. [1]

And now we come to the Big Kahuna, #8. This week's contest. Entries close on July 20. The situation is, Satan has arrived for his appointment with God. My entry, God willing, is:

"You're being yanked off of Goldman Sachs." 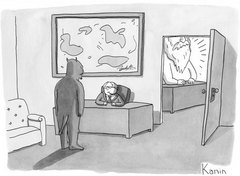 I encourage you to enter also. There is no right or wrong about humor. Either you think it's funny or you don't. When the New Yorker was founded, it included cartoons in the tradition of Punch, the late British weekly. Despite a lifetime of Anglophilia, I was rarely able to even understand one of its cartoons.

The traditional New Yorker cartoons have frequently keyed current news topics or vernacular speech, but many of their contest winners seem generic, as if their contest screeners don't follow the news or don't get topical references. Surely I was not the only entrant who caught that clear reference to "March of the Penguins." Do you think the judging could possibly be outsourced? Naw. Indians have better senses of humor than that.

In any event, we recently passed an anniversary: Three million visits to this blog. That represents three million potential entries in The New Yorker Cartoon Caption Contest. I therefore declare the Roger Ebert's Journal New Yorker Cartoon Caption Contest. The first contributor of a post to this blog to become a finalist in the New Yorker competition will win, in addition to the fame and glory of seeing their caption in print, a shiny new dime. That's ten cents more than the New Yorker will give you. We pay postage.

[Footnote #1. It has been pointed out to me by several readers that all three finalists could very well refer to eggs.

Readers: Choosing from the reaer comments below, chose your SINGLE favorite caption for contest #200 (Satan at God's office)..Do not choose a caption of your own. Send to me at answerman@gmail.com. I will tabulate the three most popular, and then there will be a voting round. Winner gets a shiny new dime, fame and glory. DEADLINE: August 15, 2009.

Here is the main page of the cartoon caption contest. And here are the previous winners. And on this page, you can order any entry, including your own losing entries, as a print or on a T-shirt, although for that you must be registered first.

A wide selection of James Thurber's drawings, cartoons and covers at the New Yorker's Cartoonbank.com.

Thurber's "The Unicorn in the Garden," made into an award-winning 1953 animation. (Suggested by reader Ryan in Tucson)

The drawing below was the subject of one of the New Yorker's competitions. I reprint it in honor of the immortal James Thurber, who I believe might have inspired it. To view the Thurber dog, go here. 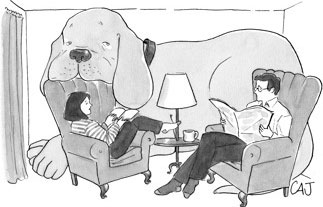