The leisure of the theory class 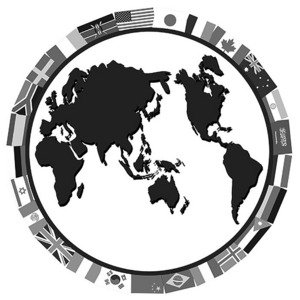 I have lived more than nine months of my life in Boulder, Colorado, one week at a time. Here I am again. Here more than anywhere else I have heard for the first time about more new things, met more fascinating people who have nothing to do with the movies, learned more about debate, and trained under fire to think on my feet. So please don't zone out on me because I use the zzzzz-inducing term "Conference on World Affairs."

For 61 years, this annual meeting at the University of Colorado has persuaded a very mixed bag of people to travel to Boulder at their own expense, appear with each other on panels not of their choosing, live with local hosts who volunteer their homes, speak spontaneously on topics they learn about only after they arrive, are driven around town by volunteers, fed at lunch by the university, and in the evening by such as CWA chairman Jane Butcher in her own home. For years the conference founder Howard Higman personally cooked on Tuesday night. The hundreds of panels, demonstrations, concerts, polemics, poetry, politics and performances are and always have been free and open to the public.

Now it is springtime in the Rockies, although some years that doesn't preclude two feet of snow. The birds are singing in the trees, and I stroll beside the bubbling brook and look upon the bridge where Jimmy Stewart kissed June Allyson in "The Glenn Miller Story." In every place like this I have sacred places where I touch base in order to preserve the illusion of continuity. 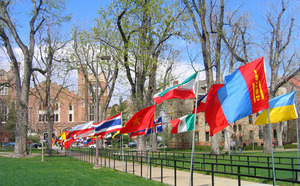 After the second session of "Cinema Interuptus" (involving Ramin Bahrani, his "Chop Shop," Jim Emerson and me and several hundred eagle-eyed Interrupters), I paid a ritual visit to Daddy Bruce's Bar-B-Q, where I was greeted by Daddy Bruce Junior and purchased the Three Meats Platter for Chaz. After untold decades in business, Daddy Bruce's still lacks a refrigerator. All meats are fresh today, hickory-smoked over real logs. Cold drinks are kept in a big picnic cooler filled with ice. The interior is large enough for a few counter stools, two tables for two, and Daddy Bruce Junior's piano, which he claims he can teach you to play in one day.

I go back so far I remember Daddy Bruce Senior, famous in Denver for his free Thanksgiving feeds. Bruce Junior is 82 years old. At least Daddy Bruce's is still here. "You know Tom passed?" Bruce asked me. "You always liked Tom's." Yes, I did. Tom's Tavern is no more, replaced by--I can't bear to tell you. There Howie Movshovitz the film critic and I would make an annual pilgrimage without fail, to talk about how we had been eating Tom's hamburgers since 1969 and the rest of life was a Platonic illusion separated by visits to Tom's Tavern. Maybe that was more my theory than Howie's. 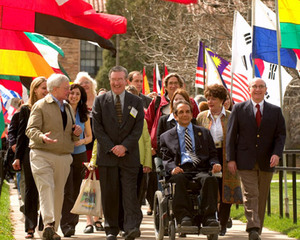 The Stagehouse II is also no more. I walked into this vast used book store and art gallery when a 30-something man was unpacking cardboard cartons to open up shop. This was Richard Schwartz, an example of the sort of person a college town will attract: Well-read, intellectual, funny, setting down roots and making a difference, because a college town without good used book stores is not worthy of the name. It was Dick who sold me my first Edward Lear watercolor. Let me tell you how engaging he could be. Calling me in Chicago, he started chatting with Diane Doe, my secretary at the Sun-Times, and something traveled through the phone wires and into their hearts. They were married for 25 years before Dick passed away. Now the site of the Stagehouse II is occupied by--I can't bear to tell you.

Boulder is my home town in an alternate universe. I have walked these streets by day and night, in rain, snow and sunshine. I have made lifelong friends here. I grew up here. I was in my 20s when I first came to the Conference on World Affairs. I returned the next year, and was greeted by Howard Higman, its curmudgeonly founder, with: "Who invited you back?" Since then I have appeared on countless panels where I have learned and rehearsed debatemanship, the art of talking to anybody about anything. "Ask questions," advised Studs Terkel, who gave the keynote one year. "If you don't know anything, just respond by asking questions. It's not how much you know. It's how much you find out." 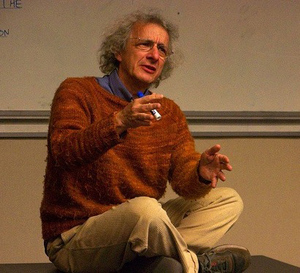 Astronomer and cyberguru Clifford Stoll on "Beyond Computers: Living Face to Face"

There are world-famous scientists here, filmmakers, senators, astronauts, poets, nuns, surgeons, Indian chiefs. One year Chief Fortunate Eagle, who led the sit-in at Alcatraz, was astonished to be picketed by a cadre of topless lesbians, who objected to--I dunno. The exploitation of Pocahontas, maybe. Here I discussed masturbation with the Greek ambassador to the United Nations. I analyzed dirty jokes with Molly Ivins, the cabaret satirist David Finkle and the London Guardian's Parliamentary correspondent Simon Hoggart. Here Margot Adler, the famed wiccan, drew down the moon for me. Here I met Betty Dodson, the sexual adventurer, who arrived one year wearing a sculpted brass belt buckle in the form of a vagina. Here I asked Ted Turner how he got so much else right, and colorization wrong. Here Patch Adams turned up wearing a psychedelic suit and floppy red clown shoes. I rather avoided him until he crossed a room and announced, "I agreed with every word of your review of that loathesome film about me."

I wrote about such events in a diary one year for Slate.com. "You give the wrong impression!" Chaz told me. "It's not all witches and topless lesbians. It's mostly serious." Quite true, and improvisational, and surprising. In this lockstep world of sound bites, how refreshing to witness intelligent people actually in spontaneous conversation. No papers are allowed to be read. It is unusual to listen to people in the act of having new ideas occur to them.

I could tell you about some of the people here this year. The Irish storyteller. The blind New Orleans pianist. The fire-walking astrophysicist. The SETI guy. But I don't want to make a roll call. I want to be impressionistic. I want to describe a week when bright, articulate people think on their feet. No, not all pointy-headed elites. Over the years, Temple Grandin, who is autistic and the designer of most of the world's livestock-handling chutes. Buckminster Fuller, who, when you said "Hello," responded, "I see you." Dave Grusin, the Oscar-winning composer. A bricklayer. A monk. Designers of solar energy systems. 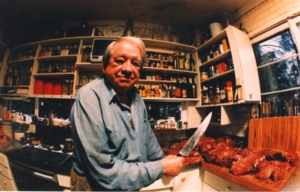 TV talk shows used to be open-ended. People talked so late on Saturday night the station started playing the "Star Spangled Banner" to start their Sunday morning programming. Now a two-minute "guest shot" on cable news seems long. "Spokespeople" repeat the same talking points again and again and again. A generation is being trained to base relationships on 140 characters or less.

Ramin Bahrani, who won a Guggenheim on Wednesday, was here all week to discuss his "Chop Shop" in minute detail. It was astonishing. The smallest details of the film reflected the vision of Bahrani and his cinematographer, Michael Simmonds. He explained why every shot was chosen. How it was choreographed. How the plot, which seems to some to unfold in a documentary fashion, has a three-act structure, a character arc, and deliberate turning points. Why there was a soccer sticker on the back of a pickup truck. How every visual detail, including the placement and colorization of junk in the far background, was consciously planned. How certain shots were influenced by Bresson, Antonioni, Alexander Mackendrick, Godard. How the colors were controlled. How he worked in real situations by backing off and using long shots. How he worked with non-actors for months. How 25 takes of a shot were not uncommon. How he had prepared on the location for six months. How the film was anything but improvised. 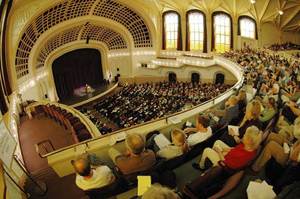 Macky Auditorium, home of Cinema Interruptus and a whole lot else.

In a widely-read recent New York Times article in praise of Bahrani, A. O. Scott described this as "neo-neo-realism." In a New Yorker blog, Richard Brody attacked Scott for praising, and I quote, "facile realism." As applied to Bahrani, this is a surprisingly unobservant criticism. If the jaded Brody could have heard Bahrani so carefully discussing his methods and philosophy, he would have crawled under his seat and ordered out for sackcloth and ashes.

Every year there is a jazz concert featuring world-class professional musicians, performing for free, convened by the Grusin brothers, Dave and Don. This year there were 14, from Lebanon, Brazil, Colombia, Mexico, Cuba, Germany, and all over America. I heard a set of bongo drums played by Rony Barrak more rapidly and with more precision than I have ever heard before. The flautist Nestor Torres playing Bach with heart and then segueing into Latin jazz, with one of three songs composed specifically for this night.

But I don't want to review the two-hour concert. I want to talk about the spirit. During the last song, the charismatic jazz vocalist Lillian Boutte, from Germany out of New Orleans, was so infectious and happy that people started dancing in the aisles. People, from my knowledge, ranging from 16 to 80. You know these days how people when they're dancing sometimes look intensely serious about how cool they are? Their arm movements look inspired by seizures and the hammering of sheet metal. These aisle dancers weren't like that. They were feeling elevation. They weren't smiling. They were grinning like kids. On the stage, the musicians were grinning, too. There was a happiness storm in old Macky Auditorium. After all their paid gigs in studio recording sessions, how often do 14 gifted improvisational jazz and Latin artists get to jam together just for fun? All free, all open to the public. And a few blocks away, Daddy Bruce Junior ready to teach me the piano.

A panel in the Glenn Miller Ballroom. At the left, David Finkle. Photo montage by Andy Ihnatko, who must have been seated directly on top of the POV.

Web site for this year's conference.. The Tuesday night concert and some other events will stream live.

Shodekeh, who performed at the jazz concert, explains beatbox on a CWA panel: