The image of a man you do not see 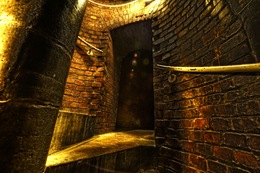 Much modern architecture has grown tiresome to me. It does not gladden the heart. It doesn't seem to spring from humans. It seems drawn from mathematical axioms rather than those learned for centuries from the earth, the organic origins of building materials, the reach of hands and arms, and that which is pleasing to the eye. It is not harmonious. It holds the same note indefinitely.

It was not always so. My first girlfriend when I moved to Chicago was Tal Gilat, an architect from Israel. She was an admirer of Mies. Together we explored his campus of the Illinois Institute of Technology. She showed me his four adjacent apartment buildings on Lake Shore Drive and said they looked as new today as when they were built. It is now 40 years later, and they still look that new.

Then I was impressed Now I think of it as the problem. They will never grow old. They will never speak of history. No naive eye will look at them and think they represent the past. They seem helplessly captive of the present. On the other hand, I have never shown this city to a visitor who did not respond emotionally to the sight of the Wrigley Building and Tribune Tower, facing each other across Michigan Avenue. The Wrigley, which Frank Lloyd Wright said "illustrates the principle that an ugly building by day, if illuminated, will be ugly by night as well." The Tribune, sometimes derided as Col. Robert McCormick's Gothic monument to his prehistoric politics. No one who sees them is not delighted. 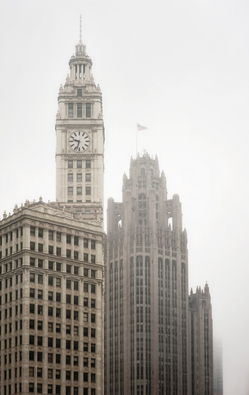 Chicago has been called the capital of modern architecture. The city had the good fortune to be burnt to the ground in 1871 and to be rebuilt by geniuses. I know their names, but won't trouble you; this is not a history lesson. Here stands the tallest building supported by its own walls. The first skyscraper with walls hung from a steel frame. Here is the home of the Chicago Window, startling at the time because it was wider than any window previously seen.

I walk around Chicago, and look up at buildings of variety and charm. I walk into lobbies of untold beauty. I ascend in elevators fit for the gods. Then I walk outside again and see the street defaced by the cruel storefronts of bank branches and mall chains, scornful of beauty. Here I squat! they declare. I am Chase! I am Citibank! I am Payless Shoe Source! I don't speak to my neighbors. I have no interest in pleasing those who walk by. I occupy square footage at the lowest possible cost. My fixtures can be moved out overnight. I am capital. 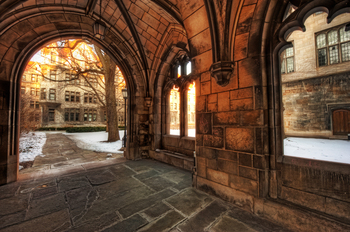 One of the most intriguing classes I took at the University of Illinois was devoted to the Green Tradition in America. It was taught by Sherman Paul, a famous English professor, who identified a theme running through literature, architecture, design, art, music. He wasn't using "Green" in the current sense. For him it was interchangeable with "Organic." His starting point was Emerson. He taught us Thoreau, Walt Whitman, William Carlos Williams, Ezra Pound, Edmund Wilson, Charles Olson, Robert Creeley.

In that class we read Louis Sullivan's Kindergarten Chats, written for a younger generation of architects. Sullivan wrote it on a desk that still stands in the Cliff Dwellers Club of Chicago, where he lived some of his later years in bankruptcy. He imagined his Chats addressed to a recent university graduate who might come to him for study "of those natural, spontaneous powers which had been ignored during his academic training." He began by telling this student: "Every building you see is the image of a man you do not see." 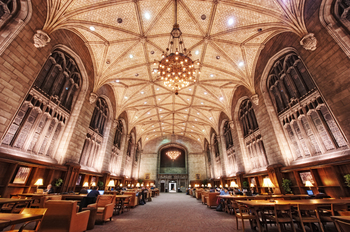 That image is shaped by the man's values, he said. If you want roses in your garden you must have them in your heart. "There is a general sense in the community that there are certain values which money cannot and does not measure; certain services rendered, of which money is not the impelling cause, or the mechanism of exchange, or the standard of estimate. And that it is tacitly felt and recognized that these services are of great and positive value to the community; they added to its wealth."

Louis Sullivan died in 1924. He helped inspired the Prairie School of architecture and the related Arts and Crafts Movement. His great contemporaries included Daniel Burnham, whose bold 1909 Chicago Plan protected the lakefront essentially invented modern city planing. Frank Lloyd Wright was Sullivan's pupil. In 1937, Ludwig Mies van der Rohe fled from Germany to Chicago, taking further the modernism which Sullivan was earlier said to represent. Made head of architecture at IIT, he proceeded to design its campus. Although Mies is believed by many to have followed in the direction indicated by Sullivan, I doubt Sullivan would have been pleased by many of his buildings. 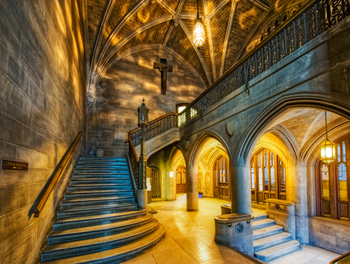 Sullivan famously said, "form follows function." Mies famously said, "less is more." Are these two ways of saying the same thing? I think not. Sullivan also said, "The building's identity resides in its ornament." His great buildings, his early skyscrapers, were vast and strong, but they had ornate entrances, stunning lobbies, cornices, canopies, deceptions, elaborate decorations, breaks in the monotony of the facade. Most of Mies' work was as sparing as it could possibly be: Rigid rectangles broken into smaller rectangles as if drawn with a straight edge pressed to the page. Look at IBM Plaza in Chicago and you will see a building with no ornament at all. The man behind a Sullivan building seems humane and humorous, a bringer of gifts to the observer. The man behind a Mies building seems more like a machine and a miser, never relinquishing a single detail not absolutely necessary. Sullivan allows whimsy. Mies slaps its hand with a ruler.

Mies was nevertheless a great creator, an original, whose buildings are at least forthright in their deliberate simplicity. (Please don't inform me of his infinite attention to proportion: I know.) But he and his generation seem to have pointed us down the road to an architecture that is totalitarian in its severe economy. Today with too many new urban buildings money is indeed the impelling cause, forbidding the slightest concession to visual pleasure or gratuitous beauty. When Philip Johnson designed the AT&T building, when Frank Gehry designs a public place, people like us are grateful but the establishment scoffs. 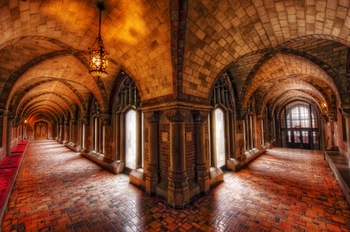 Remember a deli, with its neon signs, its daily prices, its sausages and cheeses and displays of pop and wine in the window. Now it has been defaced and replaced by this branch of the Bank of America, which was not even conceived for this site, but offers as little glass and metal as it possibly can, devoid of any ornamentation at all. Remember a fussy, mussy bookstore, its aisles wandering here and there, and now regard Border's -- which sells books, not clothing, but could otherwise be Old Navy. A while ago I wrote with love about the Old Timer's Lounge in the Loop, where you could slide into a booth and order good, simple food. It has been closed. I await with dread to discover what hideous extrusion of cookie-cutter marketing will replace it.

In architecture I am a reactionary. This isn't ideological with me; it's visceral. When I look at a building and conclude it's "beautiful," I'm not looking at the work of the children of Mies. Having spent a lifetime wandering when I could in London, Paris, Stockholm, Cape Town, Kyoto, my feet linger on the old streets but avoid the new. Venice will never be eaten by modern architecture; although the most threatened of cities, it is also the safest. 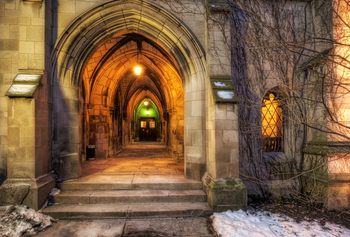 These thoughts were directly inspired by an astonishing web site a friend pointed me to. It features the photography of Justin Kern. He finished his dissertation at the University of Chicago in January 2010, headed west, and found himself homesick for the architecture that had surrounded him on the Hyde Park campus. There are many other places and subjects on his site, but what drew me immediately was a portfolio he calls "the University of Chicagwarts." I spent a year as a doctoral student at Chicago, and his photographs made my heart quicken.

The University was made possible by a donation from John D. Rockefeller in 1890, and was inspired by Oxford; two of the buildings are deliberate copies of Magdalen Tower and Christ Church Hall. Postwar buildings on the campus were by such as Erro Saarinen and Mies, and Walter Netsch designed the Regenstein Library in the Brutalist style. After walking from the central campus, it comes like a poke in the eye. 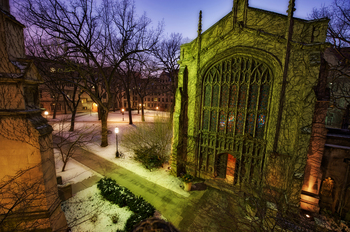 I've illustrated this entry with some of Kern's U of C photographs. Please look at them; click on them to expand. When I was at the University of Chicago, and in certain buildings at the Universities of Illinois and Cape Town, I felt Elevation while simply walking through the space. I felt that being a student was ennobling, and that these spaces were the backdrop for great enterprises. The rigid, hostile forms of many modern buildings say, I cost as little as I could, and can be reproduced anywhere. The architecture shown in Kern's pictures says, Allow me to congratulate you on your idealism. Here is the "Chicagwarts" section of Justin Kern' website. 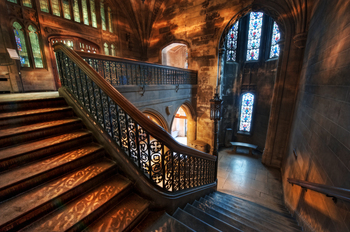