The ecstasy of the filmmaker Herzog 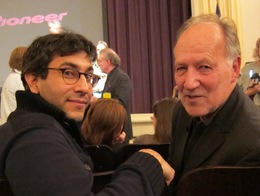 I saw "Aguirre, the Wrath of God" for the first time in a defrocked Lutheran Church in the Lincoln Park neighborhood, which Milos Stehlik had taken over for his newly-born Facets Multimedia. "It is a film you must see," he told me. "Bring a pillow. The pews can get hard."

I saw a great film, one of the greatest ever made. An essential film. In 1999, I made it one of the first titles in my Great Movies Collection. Now I wonder if I really saw it at all.

Werner Herzog is in Boulder this week, to join another great director, Ramin Bahrani, in viewing "Aguirre" a shot at a time. It is a lifetime experience for a film lover. We're at the 62nd annual Conference on World Affairs. Maybe 1,000 people crowded into Macky Auditorium, where Bahrani and Herzog sat side by side in the dark, Jim Emerson froze the DVD frames when required, people shouted out questions, and Herzog spoke about the making of the film.

This program was born in 2009. Last year, Bahrani joined us for a "Cinema Interruptus" of his "Chop Shop." He spoke of film with such respect and love. He is a meticulous director; not a frame is filmed with inattention. He mentioned how much he would love to meet Herzog. An idea was born. This year Ramin and I invited Herzog to join us. Herzog came, and was mesmerizing. I could listen to him all night. His imagination is not beaten dead by popular culture. He seeks new visions--literally, at the poles, in the deserts, in the sea, on mountaintops, and in the human mind. Here he was discussing his experiences in filming the first 17 minutes of "Aguirre," for that's as far as we got on the first day of the week. 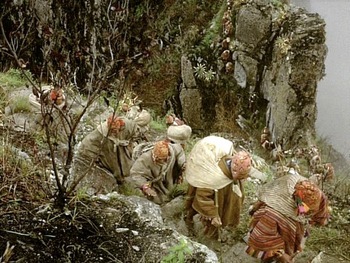 The film opens with a shot of perhaps 200 Spanish Conquistadores and Indian slaves, making their way down a narrow path with a 2,000 meter drop on either side. They drag cannon and supplies. It is muddy and slippery. Only half a dozen were professional actors. The others were native Indians or hippies and street people recruited in the nearest small city. He sent them up the path in the reverse order that he wanted them to descend. Were they happy to wait up there? The path was too narrow for two to pass. If he held up the line at the bottom, they had no choice.

They descend at first in a very long shot, indistinct in the mist, dwarfed by the Peruvian rain forest. Then, in the same unbroken shot, the camera adjusting, we see them appear in foreground, moving from left to right, Right, the positive direction, because they believe they are approaching El Dorado. Not professional faces. Weathered, tired, lived-in faces. The Indians wear the clothes they were wearing when they arrived at the shoot. 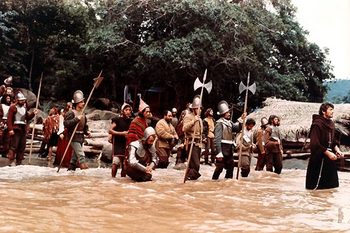 Herzog had only one take. He would never be able to persuade his actors to climb again for a second one. As we watched them descend, he froze the DVD frame to discuss several of the actors. A fat man who ate all the mangos. A close friend, semi-literate, who had bicycled 35,000 km around North America and later became a great photographer. Above all, his star Klaus Kinski, about whom some years later he made a film: "My Best Fiend."

"Is it true," a voice from the dark asks, "that the Indians asked your permission to murder him?" 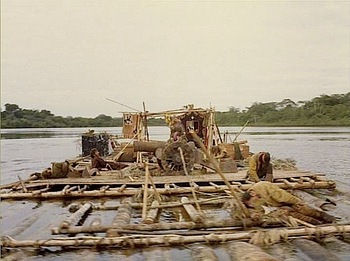 Bahrani freezes a frame showing a small covered carrier like a tent, borne through the jungle on poles by bearers. It contains one of the women in the party. This detail, and most of the film, has no real basis in fact. Everything comes from Herzog's imagination.

"Is that your hand?" Bahrani asks. We see a bare hand shoot out to steady the carrier, and then disappear.

"Yes, that is my appearance in the film, "Herzog says. "I was afraid they would lose their footing."

"When I show this film to my students at Columbia," Bahrani says, "I always tell them, I'll bet that's Herzog's hand." 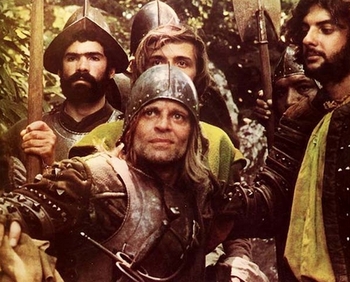 The party arrives at the Urubamba River, with its famous rapids. It is January 2, 1971--flood season. They construct rafts so that an advance party, led by Aguirre, can go on ahead. They can only film the river scenes once, because the jungle makes it impossible to walk back along its banks. One of the rafts is deliberately steered into an eddy. This was very dangerous, Herzog says; they had men above them on a cliff with ropes to lower if the raft capsized. Only the toughest of the actors were on this raft, "with a very substantial increase in pay."

A quarter-mile upstream from this shot, Herzog says, he returned only a year ago to the Urubamba to shoot a scene for his latest film, "My Son, My Son, What Have Ye Done." Nobody asked him why, and indeed it is hard to pinpoint a reason why footage from a Peruvian rapids was required for a crime drama set in San Diego. Somehow, with Herzog, you don't ask such a question. 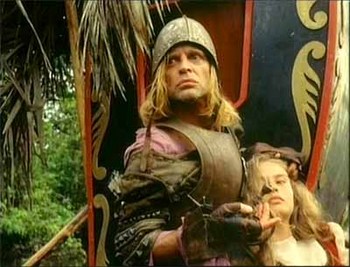 There were other problems. Herzog grabbed a tree that was a highway for fire ants, then hit the tree with his machete and dislodged hundreds more that fell upon him. A thieving transportation company bribed customs officials to stamp its documents, and then dumped the cans of negative in a field, where Herzog's brother later discovered and rescued them. Herzog shot the second half of the film not knowing if he had the negative of the first half.

He said he doesn't give a great deal of thought to composition. "I focus entirely on the subject of the shot." One shot shows the fat man straddling a cannon and eating a mango. A voice asks, "Is that a phallic symbol?" Herzog replies" "It honestly never occurred to me until you pointed it out. I wanted to have a shot showing the man who consumed all our mangos." 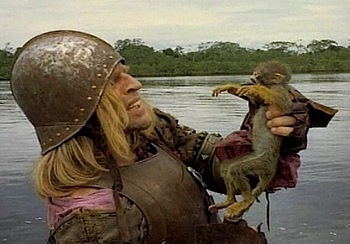 There is audience discussion of the "painterly composition" of a shot of a camp the Spanish party makes in a clearing.

"I am a filmmaker, not a painter," Herzog says. "I have a gift for arranging men and horses. It comes easy for me."

It is 6 p.m., and we have been through only 17 minutes of the film. Herzog can spare only one more day away from his current film. Then Bahrani will take over, and after him, Jim Emerson and the actress Julia Sweeney. Many of those in the audience are old hands at this process. They are amazingly well-informed.

Herzog must return to work. He has been granted three hours to film inside the Cave of Chauvet-Pont-d'Arc in Southern France, where the wall paintings have been dated to 32,000 years ago. There is no documentarian better suited than Herzog to make this film of a sacred place unseen for centuries. He will bring to it awe and poetry.

I said earlier I wondered if I had ever truly seen "Aguirre, the Wrath of God." I've seen it many times, and analyzed it a shot at a time. But I realize that to some degree I saw it through eyes conditioned by commercial movies. 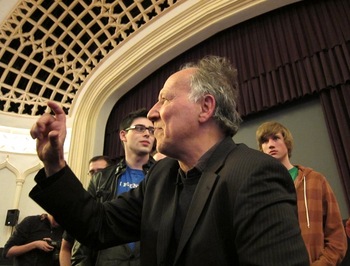 Herzog has spoken of the Voodoo of Location. By that I think he means the ways in which an actual location, where actual events take place, carries a psychic, or emotional, or sensory, charge to the screen. There are no special effects at all in "Aguirre." What you see is what was actually there. Many of the shots were done in one take. Some two. Only a few dialogue passages in three or four. In some cases, the events shown could only take place one time.

The film documents a daring and inspirational enterprise, and a reckless one. It shows Europeans invading a new land, tragically unsuited to survive in it, and ruinous to the existing culture. They searched for gold--which, in some way, explains all colonialism. But Herzog said, "I give no thought to symbols or messages." He also has only contempt for story arc, "the Hollywood hero going through a pleasing series of events." Nor does he care about time, and is willing to let a shot extend beyond its conventional length if the duration creates a feeling within us.

It is all the experience itself, the immediate experience. During some of the scenes on the river rafts, he said, "we were all joined together--actors and crew members--and we knew we could only do this one time." What they did put their lives at risk, although no one died. They did it for many reasons. Then it was done. Now we see the film. The film, and also the record of the creation of a vision.

My blog entry about Ramin Bahrani, the new great American director.My blog entry The Leisure of the Theory Class, on the Conference on World Affairs.
Advertisement
In the first two videos below, Herzog describes his current project involving the Cave of Chauvet-Pont-d'Arc. You can see what a spellbinding storyteller he is. I also include Bahrani's short film "Plastic Bag," with narration by Herzog.