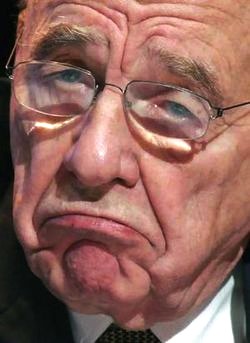 Mike Royko called Rupert Murdoch The Alien. He landed on the Chicago Sun-Times like a bug-eyed monster from outer space and extruded poisonous slime. I was an eyewitness.

Under the leadership of publisher James Hoge, the paper had won six Pulitzers and should have won another one (for the ingenious idea of opening a bar named the Mirage and baiting it to attract the flies of Chicago corruption). Hoge had just overseen a redesign of the paper that made it then (and in my opinion still) the most elegant tabloid I had ever seen.

The Sun-Times was poised on the edge of something great. The Chicago Tribune remained tethered to its hidebound past. Morale was high.

After the closing of the Chicago Daily News in 1978, Royko, the greatest Chicago columnist, had taken up residence in a corner office of the Sun-Times where he wrote his superlative daily column and smoked all the Pall Malls he wanted to. This golden age lasted until 1983.

The paper was owned by Marshall Field V and his brother Ted Field. Ted wanted to cash in. Marshall couldn't or didn't choose to buy him out. Murdoch was known to be a bidder. Royko was involved in negotiations with a group of local investors assembled by Jim Hoge to buy the paper. Marshall Field, who owned half the paper, said he was willing to sell to that group, but Murdoch offered $10 million more than Hoge could raise, and Marshall's brother, the movie producer Ted Field, insisted they take it. 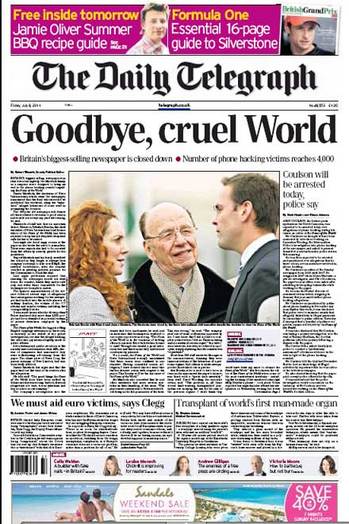 This was a great blow to Mike. He went home and had a few drinks, and when the local TV stations brought their cameras into his den, he announced that a Murdoch paper was "not fit to wrap fish in."

The next afternoon I sat with him at Billy Goat's.

"Murdoch doesn't care what you say about him," I said.

"It's not what I said about him," Mike said. "It's that after describing a Murdoch paper that way, how can I work there?"

I continued to work at the Sun-Times, explaining: "It's not Murdoch's paper. It's my paper. He only bought it."

On the first day of Murdoch's ownership, he walked into the newsroom and we all gathered around and he recited the usual blather and rolled up his shirtsleeves and started to lay out a new front page. Well, he was a real newspaperman, give him that. He threw out every meticulous detail of the beautiful design, ordered up big, garish headlines, and gave big play to a story about a North Shore rabbi accused of holding a sex slave. 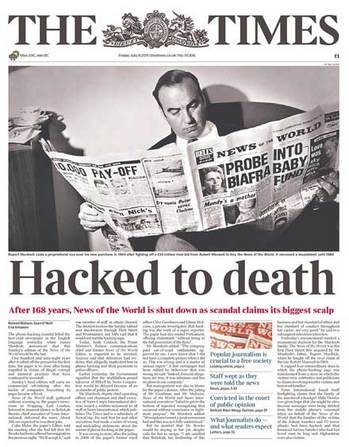 The story turned out to be fatally flawed, but so what? It sold papers. Well, actually, it didn't sell papers. There were hundreds of cancellations. Soon our precious page 3 was defaced by a daily Wingo girl, a pinup in a bikini promoting a cash giveaway. The Sun-Times, which had been placing above the Tribune in lists of the 10 best U.S. newspapers, never took that great step it was poised for.

In the years to come, Murdoch brought in various editors, all of whom I liked, one from Australia, two from England. Slowly, piecemeal, they did what they could to restore the paper's lost respectability. They were all newspaperman and had in their blood a respect for the craft that Murdoch manifestly did not share.

But Murdoch was a gifted businessman, and he had larger designs. The Sun-Times owned a local TV station, WFLD/32. Murdoch began buying other TV stations, assembling what would become the Fox Network. When cross-ownership of TV and print in the same market was outlawed, he was forced to sell the newspaper. (The Tribune was allowed to keep WGN-TV and radio, and that's a long story.) As a parting gift, he bequeathed us a publisher who was forced to resign "after he lost an intense power struggle with the newspaper's chief financial officer," as the New York Times tactfully worded it in the days before David Carr. 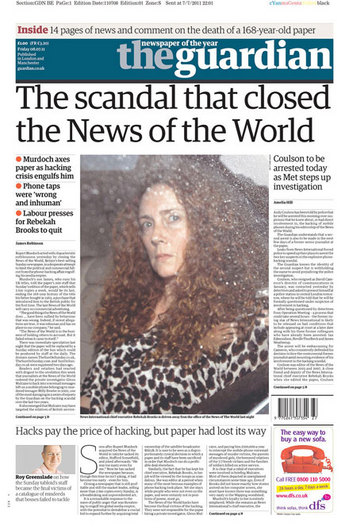 It is therefore with a great deal of satisfaction that I observe the Alien's current troubles. This man has done more to harm journalism in America and Britain than any other person. I cannot speak for Australia. In the U.S., where his newspaper holdings are limited to the New York Post and the (actually good) Wall Street Journal, his damage has been done with Fox News, the first deliberately and unapologetically biased and partisan network in American history. You disagree? Be my guest.

In the UK, it is now revealed, his managers and editors oversaw a culture of bribery and deception that was depraved even by the low standards of Brit tabloids. It appears even the Queen's cell phone was tapped, leading my friend Margo Howard to ask on Twitter, (1) Does the Queen actually use a cell phone? and (2) Would the hackers be guilty of treason?

You've read the news. I need not recount the details of the scandal. What we see now is the rare sight of all three major British parties, Conservative, Labour and Liberal Democrats, marching together arm-in-arm, united in joyous agreement to bring the Dirty Digger low. His hopes of buying control of BSkyB, the British satellite network, appear doomed. His lieutenants face squirmy sessions before Parliamentary committees, and some of them may do prison time.

Murdoch himself, his son James, and his cherished News International CEO Rebekah Brooks, are all said to have no "personal knowledge" of the phone hacking. I think the term for this is plausible deniability. As David Carr, the most excellent media reporter for The New York Times, writes today of Brooks:

I'd suggest it was inconceivable she did not know, given the number of hacking targets. What editor doesn't know where her stories come from, especially stories chock full of highly private, delicious conversations. Did Ms. Brooks think they were borne in through the window by magic fairies?

The News of the World staff reportedly greeted Ms. Brooks' statements in their newsroom with hoots and derision. One would expect no less. Britain now apparently faces a period without coverage of vicars with knickers before Murdoch launches the Sun on Sunday to cover the screws of the world.

Murdoch has been brought to bay by one great British newspaper, the Guardian. It devoted two years to the task. It did what frightened politicians and cowed opinion leaders dared not do -- it defied the power and the money of the Alien. Ironic, that Murdoch seems about to lose what would have been his crown jewel because he was never able to restrain the low tastes and trashy standards that wounded my newspaper in one of his drive-by shootings.     7/13/2011: In a great setback, Murdoch is forced to withdraw his bid fpr BSkyB.