The best bar in the world that I know about

The first Chicago bar I drank in was the Old Town Ale House. That bar was destroyed by fire in the 1960s, the customers hosed off, and the Ale House moved directly across the street to its present location, where it has been named Chicago's Best Dive Bar by the Chicago Tribune.

I was taken to the Ale House by Tom Devries, my fellow college editor from the Roosevelt Torch. It was early on a snowy Sunday afternoon. I remember us walking down to Barbara's Bookstore to get our copies of the legendary New York Herald-Tribune Sunday edition. Pogo. Judith Crist. Tom Wolfe. Jimmy Breslin. I remember peanut shells on the floor and a projector grinding through 16mm prints of Charlie Chaplin shorts. I remember my first taste of dark Löwenbräu beer. The Ale House was cool even then.

I returned to the North Avenue drinking scene on New Year's Eve 1966, opening night of the legendary O'Rourke's, two blocks directly west. Its last call was 2 a.m. The Ale House had a 4 a.m. license, so many of us walked down the street to continue. O'Rourke's was the newspaper bar. The Ale House was the bohemian bar. Customers flowed freely between them.

Tobin writes: "This is the painting of Arthur as a young sailor and Sandy Valentino, the most beautiful women he ever had sex with. She was a former Playboy Bunny and she was implicated in the famous kidnapping of the chimpanzee from Lincoln Park Zoo."

The bar was owned in recent years by Beatrice Klug and her ex-husband Art Klug, who really did look like Paul Newman. Art was a movie fan so obsessed it was slightly alarming. The Ale House ambiance made an ideal outpost for Bruce Elliott, the left wing unemployed-by-choice gadfly and social spy. Art died. Then Beatrice grew ill, and was catered to and cooed over daily by Bruce, his wife Tobin Mitchell, and their daughter Grace Littlefeather Elliott.

At the reading of her will it was revealed that Bea had given the bar to Tobin. Bruce could still preserve his proud record of never having worked a day in his life until his retirement at 65. (He did once, as a favor to a friend, drive a cab one Saturday morning during his San Francisco years, and has made a few bucks hustling golf for money on the public course in Jackson Park--a few times against Barack Obama, then a neighborhood organizer.)

Bea's gift inspired Bruce's blog, The Geriatric Genius, in which Elliott shows himself in the direct line of descent from the Host in the 15th century The Canterbury Tales. Chaucer's character is the central figure and narrator of the Tales, the one who knows all the others and is their common bond, yet rarely takes an active role during their pilgrimage. It is he who names them, convenes their nightly meetings, observes what they do, hears their secrets, and tells of their weaknesses. 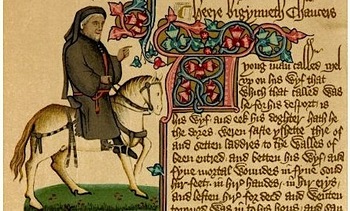 And briefly, when the sun had gone to rest, So had I spoken with them, every one, That I was of their fellowship anon, And made agreement that we'd early rise To take the road, as you I will apprise. But none the less, whilst I have time and space, Before yet farther in this tale I pace, It seems to me accordant with reason To inform you of the state of every one Of all of these, as it appeared to me, And who they were, and what was their degree, And even how arrayed there at the inn.