The balcony is closed 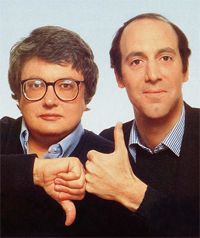 I was surprised how depressed I felt all day on July 21, when Richard and I announced we were leaving the "Ebert and Roeper" program. To be sure, our departures were voluntary. We hadn't been fired. And because of my health troubles, I hadn't appeared on the show for two years. But I advised on co-hosts, suggested movies, stayed in close communication with Don DuPree, our beloved producer-director. The show remained in my life. Now, after 33 years, it was gone--taken in a "new direction." And I was fully realizing what a large empty space it left behind. 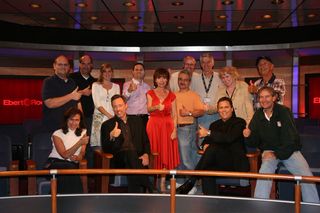 Yes, we're planning to continue the traditional format in a new venue, and taking the thumbs along with us. I'm involved in that, and it will be a great consolation. But somehow I thought the show Gene Siskel and I began would roll on forever. How many other TV formats had survived so long?

I sat in my chair and day-dreamed. I remembered a Saturday afternoon, it must have been the winter of 1975-76, when Gene and I were eating hamburgers in Oxford's Pub on Lincoln Av. with Thea Flaum, a young woman who would produce the show for WTTW, the Chicago PBS station. You didn't read her name in the news coverage of our departures, but she was the real "creator" of the show, as TV uses that term.

She told us she would build a balcony for us, and sit us across the aisle from one another. She told us we couldn't wear suits and ties--no one wore them to the movies. She came up with the idea of Spot the Wonder Dog. The show was monthly at first. On Sunday afternoons before a taping, we would separately sit across her dining room table from her and rehearse our scripts. We had "discussion points" we tried to memorize.

We were bad at that. If one guy dropped a discussion point, the other guy got mad. "We can't remember these points," Gene said, "but we can talk to each other." During that first season (the show was called "Opening Soon at a Theater Near You"), the final format took shape. In the pub that day, Thea told us, "You boys have no idea how far this show is going to go. One day you'll be in national syndication. You'll be making real money. You wait and see."

Her prophecy came true. The day we fully realized it in our guts, I think, was the first time we were invited to appear with Johnny Carson. We were scared out of our minds. We'd been briefed on likely questions by one of the show's writers, but moments before airtime he popped his head into the dressing room and said, "Johnny may ask you for some of your favorite movies this year."

Gene and I stared at each other in horror. "What was one of your favorite movies this year?" he asked me. "Gone With the Wind," I said. The Doc Severinsen orchestra had started playing the famous "Tonight Show" theme. Neither one of us could think of a single movie. Gene called our office in Chicago. "Tell me some movies we liked this year," he said. This is a true story.

We began to catch on. Jack Nicholson told Gene, "Harry Dean Stanton called me and said there were a couple of guys discussing movies on TV and they didn't even look like they should be on TV." We didn't. Tall and thin, short and fat. Laurel and Hardy. We were parodied on SNL and by Bob Hope and Danny Thomas and, the ultimate honor, in the pages of Mad magazine.

One thing we never did, apart from an occasional special show, was depart from the format: Two critics debating the week's new movies. No "advance looks" at trailers for movies we hadn't even seen. No celebrity interviews. No red carpet sound bites. Just two guys talking about the movies. At one point, our show and two clones were on the air simultaneously. Then we were left alone again: The only show on TV that would actually tell you if we thought a movie was bad. There was one improvement; we retired Spot (and his successor, Aroma the Educated Skunk) to free up a segment for another review. I remember when we jumped to commercial syndication at Tribune Entertainment, and our new producer Joe Antelo, backed us in reviewing movies by Fassbinder, Truffaut, Herzog--"those guys. Where else they gonna hear about them?"

Did Gene and I hate each other? Yes. Did we love each other? Yes. Somehow an outtake from a promo session has found its way on YouTube, where in a single take you can see us bitterly sniping at one another and then happily joking together. It was like that. "You have the entire staff in terror of you," I told him. "That's funny," he said. "That's what they tell me about you." We were both terrible to work with. And great to work with.

We went to New Orleans for the national convention of syndicated TV. Tribune had been slow in renewing our contract. Leaving our hotel, we ran into Jamie Bennett, an executive Gene knew from Chicago. Jamie asked how we were doing. "Working without a contract," Gene said. "Let's have dinner," Jamie said, and on the spot he talked us into leaving Tribune and becoming the first program of the new Buena Vista syndication division.

Disney was great to work with. Everyone called everyone else by their first name, even the president, Michael Eisner. The wonderful Mary Kellogg was put in charge of our show, and was our cheerleader and den mother. Rich Frank was president of the Walt Disney Studio. When he gave a speech, he took along a reel of clips showing Gene and me trashing movies he had produced. Great jollity. Disney never once objected to our negative review of one of their pictures. Great class.

I began to notice that Gene, who had a laser-like intelligence, remembered every phone number he had ever heard and could do square roots in his head, started getting things out of order. Before a Jay Leno taping in Chicago, he closed himself in a dark room with a splitting headache. But he went to the Bulls game that night. I left the next day for the Cannes festival, where I got a phone call: Gene was sick, was in New York for treatment. He went through the agonies of hell during that final year, but he was heroic, and taped a show barely a week before his death. I missed him terribly. I still do.

We carried on, as I believe Gene would have wanted us to do. Many critics filled the other chair, some gifted, some strange. One guy, in introducing himself, couldn't remember where he worked. I agreed with all the staff members that Richard Roeper was our choice. People thought he was chosen because we both worked at the Sun-Times. That had nothing to do with it--it worked against him, in fact. When the time came that I had to be replaced, Michael Phillips of the Tribune and A. O. Scott of the New York Times were my suggestions.

Now the time has come to awake from my daydream. That's all history--treasured history, but past and gone, all the same. I remember what Gene said to me in that dressing room before the Carson Show: "Roger, we're a couple of kids from the Midwest. We don't belong here."