The autumn leaves of red and gold 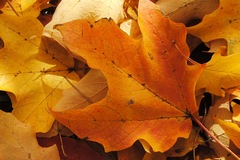 One day not long ago in the country I gathered a small pile of dried leaves and started a little fire. Then I closed my eyes and remembered. The aroma was a trigger as intense as the taste of Proust's madeleine, the little cake from childhood that summoned his remembrance of time past. It evoked nostalgia but it also evoked curious excitement and desire.

For me it is not spring but autumn that is the season of new beginnings. Spring, in school, is a time of taking final exams and saying goodbye to friends. Autumn is the start of a new year, and for me at least it always held the promise of new romance. I was now a freshman, or a sophomore, or whatever, and had left behind childhood things, and perhaps Marty would be at the Tiger's Den on Friday night and we could slow-dance to "Dream" by the Everly Brothers.

There's something stirring about new schoolbooks and three-ring binders and dressing in a fresh pair of chinos and a plaid shirt from Penney's. In high school I was a sports writer for our local paper and would attend the first football practice, with coach Warren Smith running drills with kids I went to grade school with, who now looked proud and self-conscious in their shoulder pads. After practice I would pull out my Reporter's Notebook and interview Smitty about the "prospects," and he would invariably say this was potentially the best team he'd ever coached. I'd take my notes back to the News-Gazette, type my story, and hand it in to Bill Schrader, the cigar-smoking 30-year-old sports editor who always called me, and everybody else, "Coach."

Football season opened at the University of Illinois, too, and I worked the home games in Memorial Stadium as a spotter for Curt Beamer, the paper's top photographer. Standing on the sidelines in front of 60,000 fans, watching the Illini running onto the field, hearing the Marching Band, I felt empowered to--do what? To feel empowered, essentially. Beamer gave me my instructions: "You're not here to enjoy the game. Your number one duty is to grab my belt and yank me out of the way if I'm about to get creamed by a player I can't see through the view-finder. Number two, make a list starting with "Roll 1, Shot 1" and write down the players in every shot I take, because when they get muddy they all look the same."

After the game, I'd go back to the paper to write "Big Ten briefs," revised from the AP and UPI wire stories. Michigan. Ohio State. Then across the street with my pal Hal Holmes to Vriner's, a greasy spoon unchanged from its origins as an ice cream parlor at the turn of the century, where high-stakes poker games were said to unfold in the back room. Tyke Vriner, chain-smoking over the grill, was a Champaign High School sports legend, because he played football for an unbeaten Maroon team that had to forfeit every one of its games when it was discovered Tyke was over-age. Hell, nobody told him nothing'.

And then to the Tiger's Den. A brick store front a block from Main Street in Urbana. Customized cars cruising slowly past, thought to contain sexual predators from alien high schools on the hunt for our Urbana girls. Inside, only one chaperone, Oscar Adams, who was also the high school basketball coach and Driver's Ed instructor, and who I have described earlier as possibly the best-known and most popular man in town. Oscar's chaperoning duties consisted largely of sitting in the lounge with the crowd watching "Gunsmoke" on TV.

There was a small dance hall with a stage at one end and a soft drinks bar at the other, and chairs around the walls, and the sexes eying each other uneasily, for nothing is easier for a teenager to imagine than rejection. If you knew what to look for, you'd catch guys cupping their hands in front of their mouths and sniffing to test for halitosis, at that age more feared, and more likely, than VD. The cautious among us worked through Plen-T-Paks of Spearmint, or if we were really insecure, Dentyne. Halitosis was far worse than dandruff. The only thing more to be feared was an untimely erection on the dance floor, especially if you'd been dancing close and at the end of the dance your buddies were watching you like hawks, ready to point and go, Yuk! Yuk! 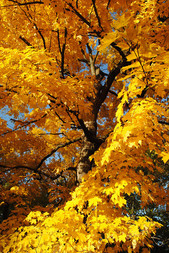 Marty (or Judi, or Sally, or Carol, or Jeanne) might be there, studiously not noticing me. You could spend half an hour deliberately not making eye contact. It was a form of pre-dance foreplay. The evening began with rock and roll, the girls dancing with each other, and then a guy would sidle up to the deejay and ask for a "slow song." And now it was crunch time. With all of your courage you approached the girl of your dreams.

It might be that you were too slow, and another guy would get there first. Was that the faintest shadow of a hint of a sidelong teasing look of regret that Marty-Judi-Sally-Carol-Jeanne sent your way? Or had she forgotten you even existed? Halfway across the floor toward her, you saw her taken into the arms of a rival, and made a studious course correction as if you'd only been walking across the room to get to the other side. When I enrolled as an Illinois freshman, the challenge of autumn was like a jolt to my being. This was the big time. At 8 a.m. of my first day, I walked into a class taught by Daniel Curley, which I am essentially still taking. He handed out mimeo'd copies of "The Love Song of J. Alfred Prufrock," which is now so beloved by me and was then, as far as I could tell, hardly even written in English. And poems by e. e. cummings that seemed written on a broken typewriter. I believed I had entered at last into the realm of Great Writers, where Thomas Wolfe had told me I belonged.

It was late on a crisp autumn evening, after walking a girl home, reciting "anyone lived in a pretty how town, with up so many floating bells down," that I made love for the first time. And then walking home, always in the air, the knowledge that someone, somewhere, was burning autumn leaves.

Yves Montand in his autumn: a concert at Olympia Hall in Paris

"Injun Summer," by John T. McCutcheon, appeared on the front cover of the Chicago Tribune Sunday magazine every autumn from 1907 until 1986, looking exactly as it does here 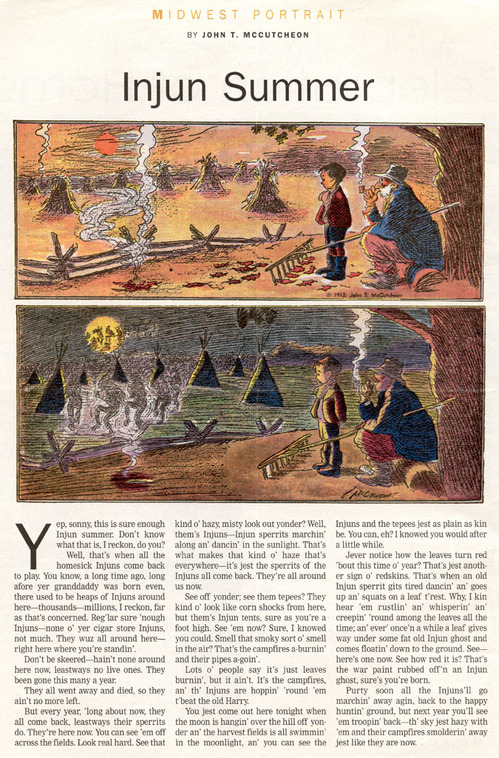