The achievement of China

I begin with a confession of ignorance. Before the Olympic Games, I had a confused and narrow vision of China. It was assembled from many movies, some of them historical dramas like "Raise the Red Lantern," some of them biopics like "The Last Emperor," some of them powerful slices of life like "The Blue Kite," "To Live," "Ju Dou" or "The Story of Qiu Ju." But all of them depicting the distance, the strangeness, the difference of China. Along with those images came a heavy overlay from the Cold War, the reign of Mao, the idea of China as a hostile superpower. I saw photos of the Shanghai and Beijing skylines, but I also pictured tens of millions living in poverty and age-old conditions. 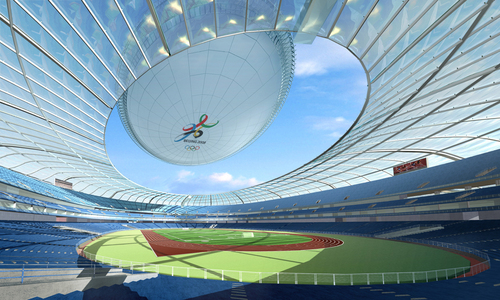 I am sure there are indeed many millions living like that. But until fairly recent decades, almost all Chinese were living in poverty hardly conceivable to the West. I watched many hours of the Olympics on TV. What came to fascinate me were the side trips, the digressions, the edges of the screen. I saw vistas of the Great Wall and the Forbidden City, yes, but I also saw ordinary Chinese citizens who looked a lot like us: Baseball caps, t-shirts, snapping each other's pictures, having fun. And in the aerial shots of events like the marathons, I got an enriched idea of the city of Beijing. The closest I ever got was Hong Kong, which is a place unique in itself. I have visited Japan, a wondrous destination. But I somehow never burned with desire to go to mainland China. I dunno. Maybe I had so many conflicting ideas in my head that I was...wary.

The 2008 Olympics have been magnificently organized and supported by China. That much is obvious. The Bird's Nest is not only spectacular in appearance, but functional and dramatic as an arena. The welcome for foreign visitors was manifest. Media coverage discussed the walls constructed to hide poor districts from foreign eyes. In 1968, the first Mayor Daley built walls to hide Chicago's poor districts from the eyes of visitors to the Democratic Convention. My mother always closed the door so visitors wouldn't see an unmade bed. The impulse is human.

China was determined to put its best face forward. In a sense, these Olympics were like China accepting an invitation it had long ignored, to open its arms to the world community. Of course there are vast areas of disagreement, issues of human rights, political disputes, questions like Tibet, the whole painful list. But there is also change and reform. Can anyone question that China has not advanced and moderated since the days of Mao? The Olympics were China's calling card, its coming-out party. China was saying, we are here, we are proud of our progress, we welcome you.

I believe these Olympics will be seen as a turning point even more important than Nixon's courageous decision to visit China. Some of the walls we saw China hiding behind were built by the West. My mental images, my limited views, are possibly typical of many Westerners, even better informed than some.

The crucial thing is that China has arrived. Having opened to us, it will not easily close again. We talk about "cultural exchanges," but aren't the most meaningful cultural exchanges those in voluntary terms? We embrace martial arts. They embrace basketball. Pop music unites teenagers everywhere. And the Western legacy of classical music is wildly popular in China. On the Today show, the pianist Lang Lang played Listz's "Hungarian Rhapsody," which he first heard at the age of two in a "Tom & Jerry" cartoon. That opened his ears to Western music. He made his American debut in 1999, at 17, with the Chicago Symphony at Ravinia. There's a cultural exchange for you.

In the late 1960s, I was asked by The New York Times to fly to Montreal and do a story about the Chinese acrobats who would be appearing next in New York. An amazing show: Human pyramids atop bicycles, other impossible feats. I remember my interview with their director. It was a tense and chilly session, observed by translators and various looming officials. I was not sure how to ask, he was not sure how to answer. Were we a little afraid of each other?

The climate prevailing at that time no longer exists. I have talked with Zhang Yimou, Chen Kaige, Joan Chen, Gong Li. We spoke in the same way that I would interview a Brit, a Swede, an Italian, a Japanese. I knew that about my small world, but the Olympics have made me feel the same approachability about the Chinese in general.

Yes, there are criticisms to be made. China, like all nations, is far from perfect. Our Bill of Rights would create an upheaval in their society. There are all the stories about the "fakery" of the Olympics opening ceremony. True, but the ceremony was showbiz, which since time immemorial has shown us what cannot be. The amazing aspect is that so many aspects of the "fakery" were so quickly revealed, and no one lost his head because of treason. Even Zhang Yimou complained a little about some of the instructions he was given.

Note, Aug. 28: I mentioned in the previous entry how the comments on this blog have educated me. Two comments below, in particular, are extraordinary. They are from Tony Zhou and Richard R. You can use the "search" function to go directly to them. The comments as an overall group are well-informed and useful.