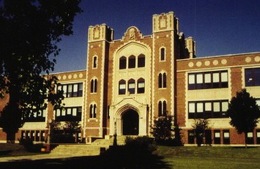 Ten years ago I was the emcee of my high school class reunion. This year I sat and watched. It was better this way. As I'd walked into the room I realized I knew almost everyone on first sight.

Now, as they passed in review, called up one by one, I saw a double image: The same person in 1960 and 2010. The same smile, the same gait, the same body language, the same eyes.

I was witnessing a truth. Within our bodies of 67 or 68 years lived all the people we had ever been or seemed to be. All the success, all the defeat, all the love and fear. We were all here.

We went to Urbana High School between 1956 and 1960. We were the first post-Elvis generation, and one of the last generations of innocence. We were inventing the myth of the American teenager. Our decade would imprint an iconography on American society. We knew nothing of violence and drugs. We looked forward to the future. We were taught well. We were the best class.

When we came back to our reunions, that's what we were told, anyway. Marie Bauer, who against all odds made me love geometry, told us that among our teachers the class of 1960 was held in the highest affection. Coach Smith told us the 1960 Tigers were the greatest football team he ever coached. Maybe that's what he told every team. Still, we did win the Big 12 championship. 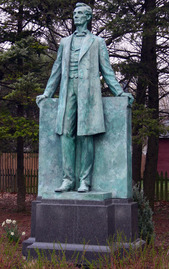 Many of our hopes were delusions. One of our class members would die as a helicopter pilot in Vietnam. Another would die mysteriously fighting with the rebels in Nicaragua. One was lost to Alzheimer's. Most of us would have success--one building a church, one becoming a bank president, one working for the CIA. Getting married, having children, having grandchildren, and now those still alive were here together after 50 years, at a new hotel located more or less where we used to pick strawberries for 10 cents a quart on the University's South Farms.

Most of our class members were still alive. This would probably be my last reunion. At our tenth reunion, held at the now-disappeared Moose Club in Champaign, there was still a little unfinished romantic business in the air. Twinges of old jealousies and heartbreaks. We noticed those who had once gone steady, the boy's class ring worn on a chain around the girl's neck, resting between her breasts in a gloat of possession. Now they had married others, but that night they smilingly took the dance floor together.

There had been hardly any drinking in high school--none, in fact, that I ever saw. Or much smoking. At the Moose Club in 1970 a lot of us were smoking or drinking, and one classmate wanted to ride back to Urbana on top of my car. Here he was in 2010, one of the most respected men in Champaign County. But still--this is the point--still absolutely the same man, sober now but with the same sardonic grin, the same sideways amusement at life. Here were girls I dated, and parked with in the moonlight to quote Thomas Wolfe on his trembling romantic destiny--his, and of course, ours. Then we kissed not so much in a sexual way as with the tender solemnity we thought of at the time as love. In 2010 that is all so long ago, but the same persons live inside, and while we live we share memories. 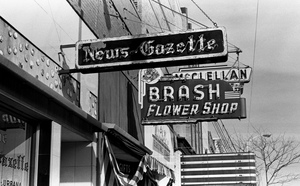 Here was one of my best high school pals. We worked together producing the senior class talent show, based on memories of four years. He and another kid constructed a plywood Time Machine pierced by dozens of light bulbs. He stood behind it, furiously rotating a copper strip past contact points so the lights formed a pinwheel effect. When Principal Braun looked behind the plywood after the show, he was aghast: "My God, Larry, you could have been electrocuted!"

Here was the girl I co-hosted the UHS radio show with. "Do you remember the time we interviewed the Smothers Brothers?" As I remembered it, Tommy needed all of his cluelessness to conceal his astonishment that we were high school kids. Here was the kid whose house I stopped at nearly many mornings before grade school, so we and his sister and brother could ride there together on our bikes. Here was this year's emcee, a best-selling psychologist, who has probably forgotten he once threw a hard-packed snowball that gave me a black eye, but I haven't.

He probably hasn't either. I am beginning to realize most of our memories are still in there somewhere, needing only a nudge to awaken. Here was a girl who appeared with me in a class play. She recalled that I had a monologue just before she was to walk onstage and kiss me--which, she said, was mortifying because she was shy. I hadn't thought about that play once in all these years, but now into my mind came the memorized monologue. From where? From where everything still is. 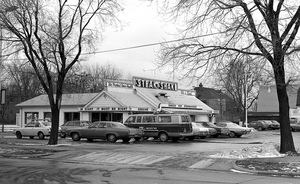 I went to school with these people for four years. With those who attended St. Mary's grade school, for 12. Those were the formative years of my life, and they are embedded in my personality. They evoke associations more fully than most of those I experienced later. One of the most noble undertakings in the history of the cinema is Michael Apted's "Up" series of documentaries, which begins with a group of British 7-year-olds, and revisits them every 7 years, most recently in 2005 when they were 49. These films are the proof of Wordsworth's belief that "the child is father of the man." Looking at my classmates, I wondered if perhaps the person we are at 18 is the person we will always be, despite everything else that comes our way. All that happens is that slowly we become more aware of what matters in life. As I looked around the room, was it my imagination that -- having been taught a few lessons in life -- we all seemed...wiser?

On the Saturday morning we took a bus tour around the twin cities. Down the leafy old streets we remembered as children, past our old houses, past Lorado Taft's status of Lincoln the Lawyer, which faces the high school. We saw ghost buildings on every street, and called out what used to be but was no more: The Elbow Room, the Urbana-Lincoln Hotel, Mel Root's all-night restaurant, the old Steak n Shake, Hood's Drugs with its chocolate and marshmallow sundaes. We drove out into vast new "developments" rising from the farmland southeast of town, $500,000 homes surrounding a golf course, looking exactly like similar "developments" all over the nation and not like Urbana neighborhoods. 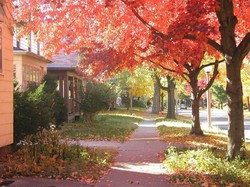 We drove around the enormous campus, half the buildings new since our time, most of the old buildings still there. Past Memorial Stadium with ungainly "sky boxes" now surmounting the grandstands where rich and poor once froze alike. Past the Morrow Plots, the nation's oldest agricultural research field; the undergraduate library next to it was buried five levels into the ground to avoid casting shade on it. Past the Assembly Hall, which we all remembered being built -- the world's largest rim-supported dome, holding 16,000 people, now threatened with obsolescence because it wasn't large enough to accommodate the new scoreboards. The new scoreboards!

We passed Taylor Thomas Subdivision, named in honor of our much-loved history teacher, possibly the first African-American to teach at Urbana High. In his civics class he taught me much of what I believe about politics. When he attempted to buy a house in a neighborhood mostly populated by professors at the university, he was rejected by the good academics because of his race. He bought a lot just outside the city limits and built the home he and his wife occupied until he died. He never mentioned that in class. 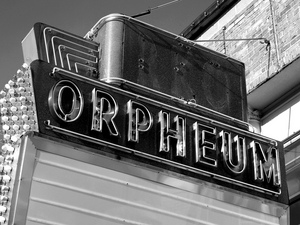 Our sightseeing trip took us down a road through the University Farms where we once parked to make out. There in a corn field, the University is building the new Blue Waters supercomputer. Our home town, the birthplace of HAL 9000, would now give birth to a computer more powerful than the next 500 largest supercomputers combined, operating at a quadrillion instructions per second. I remembered our high school science fiction club, and how we went as a group to hear Arthur C. Clarke speak on campus. Was it that visit that accounted for HAL's birthplace?

Incredibly, four of our teachers were at the reunion. Here was Dan Perrino, our bandmaster and music teacher, so beloved he is now Mr. Urbana. Paul Smith, who told me I was one of his best physics students, although that's not how I recall it. Carolyn Conrad, who inspired me in English and drama. The poetic Carolyn Leseur, who turned me on Charles Dickens for a lifetime, and who told Chaz I was always reading a book during class. It's true. I read during every class when I could get away with it. I had no idea she knew. Our teachers were a gifted faculty. Knowing all we know now, I think we can be astonished by what a first-rate education we were offered. Some of them should have been teaching at the university, but their spouses already were, and Illinois had a nepotism rule. 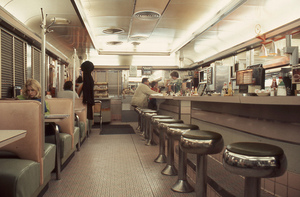 The legendary teacher of our time was Mrs. Seward, whose dreaded senior rhetoric class we began to hear about as freshmen. She was exacting and unforgiving, a tough grader. She spoke softly but firmly, and once stood looking dreamily out the window, her arms crossed, and said, "Oh, students, this morning I walked into my farmyard and listened to the worms making love." She issued lists of Rhet Words we had to try to find in our reading. They figured in our grade. She had an eagle-eye for sharing. I found Thomas Wolfe to be a gold mine of Rhet Words. When I found a word, I'd copy it in pencil on the flyleaf. From my copy of Look Homeward, Angel: Scrofulous. Immanent.

She was hard, but she was good. She intimidated us with her standards. It was said that the University of Illinois simply waived the freshman rhetoric requirement for any graduate of Mrs. Seward's. This was hyperbole, but it could have been true. When I walked into her class, I thought I knew it all. I'd already been writing for a year at the local paper, that summer full-time.She returned my first paper marked with a D, and I appealed to her in shock. "Mr. Ebert," she told me, "when, oh, when, will you learn that the paragraph is a matter of style, and not of punctuation?" Mrs. Leseur confided at the reunion that when the faculty was voting on the members of a senior honor society, I was blackballed by one teacher for being a "smartass." And who was that teacher? "Mrs. Seward." Yes! True to her standards. This long-delayed information filled me with great happiness.

On the death in Nicaragua of our classmate Joe Sanderson.
The embedded photographs are by galechicago at flickr.com. The interior is of the original Chuck Wagon Diner, where the following song was on the juke box.