Stranger in a wondrous land 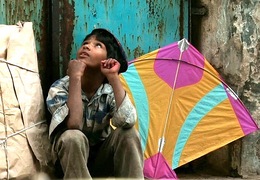 I visited India only once, for less than two weeks, but I left a part of my heart there. I can't say I know it well, but I know how it made me feel, and it seemed impossibly exotic and absolutely comfortable at the same time: I was curiously at home in a strange land.

At an event in my hotel, I met a police chief's wife, who invited me to her home for dinner. Just like that. The families seemed to function in the ways of families I knew. The fact that so many people in this far-away land spoke English made it more accessible to me. I loved the way so much of the talk circled around philosophy. I developed a particular love of the exuberant music, colors, scents and tastes. It occurred to me that no women can fail to look well-dressed in a sari.

But these are all superficial tourist truisms. I have learned more in my reading, but so could you. It's in the movies where I find sensual and instinctive insights. I like Bollywood, and the classicism of Ray, but there's one area of Indian films I've missed, or remain ignorant of: The low-budget indie scene. Sometimes, all over the world, such films are freed of the lockstep of plot and have a better feeling for the thing itself.

A new film named "Patang" in this year's Chicago Film Festival opened a new world for me. It plunges head-first into a family based in Ahmedabad, where India's largest annual kite festival is celebrated. It reflects the way Indians live in each other's pockets (to borrow the the British expression). Homes and businesses, temples and roadways, are all crowded close together, neighbors know one another, and it's all held together by a network of the most baffling and chaotic traffic in the world. 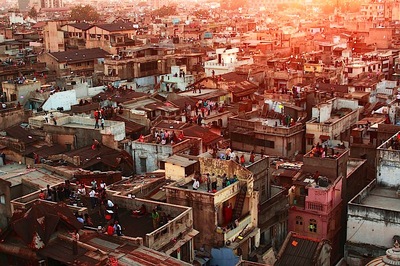 This film is joyous, but more than that: It's lovely in its construction. The director, Prashant Bhargava, born and raised in Chicago, knows what his basic story line is, but reveals it subtly. The story in outline would be simple enough for a made-for-TV movie. There is nothing simple about "Patang." The bare bones of the story: An affluent uncle from Delhi named Jayesh (Mukund Shukla) pays a much-delayed visit back home to his family in Ahmedabad, bringing along his daughter Priya (Sugandha Garg), who hasn't seen these relatives in years. He meets his mother (Seema Biswas), his grandmother Ba (Pannaben Soni), and his nephew--the son of his brother, who died of a heart attack. The nephew, Chakku (Nawazuddin Siddiqui) resents the way this distant man descends grandly on the small town relatives and feels he has the right to make suggestions and changes. There are many more details, but that's all I choose to reveal.

The story line becomes fully clear only towards the end. In form "Patang" looks almost like a cinema verite documentary of this family, surrounded by the city and the kite festival. Although it was years in the making, many key shots were obtained during the festival itself, and we see the skies over the city filled with thousands of dancing, dueling kites, as every single rooftop is occupied by people. Below in the streets, bands, fireworks and food vendors create a tumult. There is a little romantic subplot, involving the daughter from Delhi and Bobby (Aakash Maherya), who begin a flirtation on the rooftop and continue it during a motorbike ride. 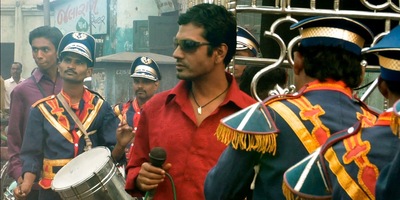 The family house itself is a character, and there are a few extended shots of its graceful, playful architecture and happy colors. Many interiors involve a photograph of the dead brother, whose soul seems to inhabit it. Meals are prepared and shared on a table in the street. The food looks delicious; fingers are often used. People are teased to perform songs. Gossip and chatter run wild. No attempt is made to lay all this out logically; indeed, we only gradually come to know who the characters are. It's clear enough, but not underlined and pounded home.

We meet a young boy named Hamid (Hamid Shaikh), who is delegated by a kitemaker to deliver a parcel of kites to this family home on the big day. His mission ends badly. A search goes up for Hamid. Meanwhile, on a bridge, Priya and Bobby begin a flirtation. Both are good looking. Her eyes dance with merriness. They've been together a few hours. In a lesser film, this would be a love story with a happy ending. "But Bobby," she says, "we hardly know each other. Do you expect me to leave behind thousands of friends in Delhi?" 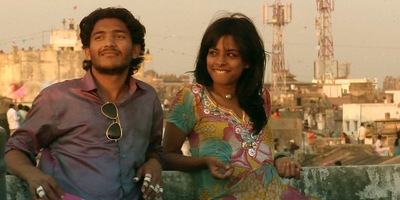 He does. Now watch carefully. Their flirtatious conversation is filmed in close ups and closer-ups. The effect is intimate and sensual. In one shot only, cigarette smoke coils from her mouth. We never otherwise see her smoking This establishes in a moment that she is more worldly than the boy. She kisses him, but that will be that: This is only a few-days visit.

Back at home, the frenzy of the kite-flying takes over. We learn that the kite strings are coated with powdered glass, and the idea is to cut another kite out of the sky and rule the clouds. This is never explained in so many words. We have to observe for ourselves that the kite-fliers protect their fingertips with tape. Such facts are embedded in the film, to be discovered in context. So is the mystery of the nephew's resentment, which is explained obliquely by indirect dialogue. We are immersed in the life and sort it out for ourselves. The effect is curiously like being invited into this home and learning while we stay. 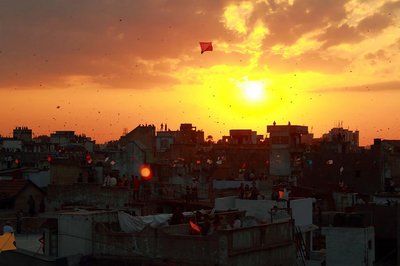 Prashant Bhargava was born and raised on the South Side of Chicago, went to grade school and the Kenwood Academy. How did his background produce such a lovely and successful indie film in India? From my point of view, the story begins about 25 years ago, when his father, Vijay Bhargava, started taking my film class at the University of Chicago's downtown extension division. Vijay was smart, affable, good company. He always saved a seat for me in the back row. During the complete silent features of Buster Keaton, we worked our way through oatmeal raisin cookies and peach Snapple. He loved movies, knew a lot about them, and when I was going to the Calcutta Film Festival he set me up with his cousin, who showed me all over town, including the Victoria Memorial, an architectural wedding cake that he regarded with a certain pleasure, considering Victoria had once appointed herself Empress of India.

Last week I was signing my book at Barnes & Noble at Webster Place. Since I can't speak, I like to shake everyone's hand before a signing. There in the line was Vijay! I hadn't seen him since before my surgery in 2006. He introduced me to his son, Prashant, who had made a film that played at the Berlin and Tribeca festivals, and others. They gave me a DVD. I brought it home and was delighted by it.

Prashant told me his dad spent over 25 years working in the administration of Michael Reese Hospital. "After 20 years of attending your class and supporting my career as a director and designer, he has taken up acting!" he told me. "He has taken over 25 classes at Chicago's Act One Studios. He is a gardener as well, and recently completed a master gardening course at UIC." 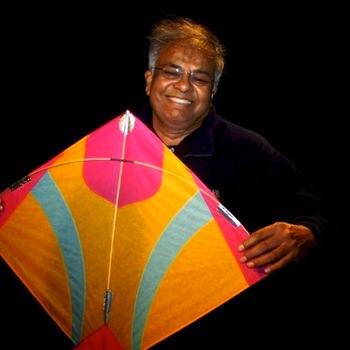 As for his mother, Ranjana Bhargava, who catered the meals of the cast and crew of his film: "For over 35 years, Ranjana has spearheaded efforts to serve the needs of women, immigrants and other marginalized communities in Chicago. She has led and managed numerous non-profit organizations, including Apna Ghar, a domestic violence shelter serving predominantly Asian women and families. She now teaches vegetarian Indian cooking on the south side of Chicago in our home."

Prashant attended Cornell, majored in computing, moved into film titles, music videos and live action commercials. "The seeds for the movie 'Patang' were based on the memories of my uncles dueling kites," he said. "In India kite flying transcends boundaries. Rich or poor, Hindu or Muslim, young or old -- together they look towards the sky with wonder, thoughts and doubts forgotten. Kite flying is meditation in its simplest form.

Prashant with his mother, sister Anurima, and father.

And so he did. "Inspired by the spiritual energy of the festival," he told me, "I returned the next three years, slowly immersing myself in the ways of the old city. I became acquainted with its unwritten codes of conduct, its rhythms and secrets. I would sit on a street corner for hours at a stretch and just observe. Over time, I connected with shopkeepers and street kids, gangsters and grandmothers. This process formed the foundation for my characters, story and my approach to shooting the film.

"I found myself discovering stories within Ahmedabad's old city that intrigued me. Fractured relationships, property disputes, the meaning of home and the spirit of celebration were recurring themes that surfaced. The film's joyful message and its cinematic magic developed organically. My desire was for the sense of poetry and aesthetics to be less of an imposed perspective and more of a view that emerged from the pride of the people and place."

And that's what happens. His film took three years of research, was seven years in the making, had 90% non-actors, improvised its takes based on the script. And it flies as free and colorfully as a kite.

Post Screening PATANG Q & A at Tribeca from Khushi Films on Vimeo.