So long for awhile 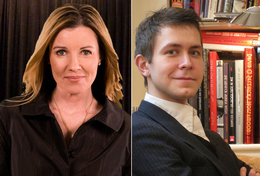 At the end of December, our public television program "Ebert Presents At The Movies" will go on hiatus while we find necessary funding. This move is necessary to allow the public television stations that carry our show to plan their programs for the beginning of the new year. We held off as long as possible but we had to give notice today.

It was a sad but necessary moment of realism. The show is nationally distributed by American Public Television (APT), and they have been very helpful. They send us to more than 95% of the U.S. public television audience and all 50 top markets. The show is also distributed overseas by the American Forces Network to over 175 countries and even to Navy ships. But in mapping out their 2012 program schedules, APT's member stations need to know what they can count on.

In my Nov. 6 blog entry about the show, I explained that Chaz and I were essentially financing the show ourselves, except for a kind donation from the Kanbar Charitable Trust. In the comments, we received many helpful suggestions from readers and viewers, including possible outlets on cable and commercial TV, internet distribution, and so on.

People have been very supportive. We've spoken to the top executives of several channels and film distributors, charitable foundations, web delivery services, potential corporate sponsors, and crowd-funding sources. And we are still talking with them, but the time crunch has intervened. It is a complicated process, and so we are going on hiatus while we sort it out.

During this period I've been moved by the determination of Chaz and our team to push ahead. We really believe in this show and its mission to provide an intelligent place for the discussion of movies in a forum accessible to the public, and in a manner that is easily understood yet that feeds the thirst for both entertainment and knowledge.

The show has been a success. We will have produced 50 episodes. In Christy Lemire and Ignatiy Vishnevetsky we have co-hosts whose chemistry has ignited, and who provide two definitely different viewpoints, which is the idea. We have developed a cadre of Contributors who have created video essays and festival reports.

We hope our hiatus will be brief. You have told us you like the show. And we now have options. A touching number of viewers offered to send us money directly. One of the avenues we may take is a Kickstarter campaign, as you suggested. We will let you know as soon as that is worked out.

Please have faith in us as we sort through the possibilities. Thank you and Happy Holidays.