Sittin' in the front row 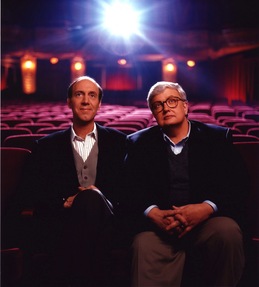 Where do you like to sit when you go to the movies? I know where I do, and I even suppose I know why. I started reconsidering my thinking, however, when I read David Bordwell's enlightening new blog entry, "Down in front!"

Here is a man who recalls every film he has ever seen, and where, and when, and why, and where he sat, and usually who he sat next to. That person has often been his wife, Kristin Thompson. That they take turns writing entries on the world's best film blog may tell you something.

Kristin and Bordwell are the authors, together and separately, of countless wonderful books. They are revered academics at the University of Wisconsin, even though they write in English and can be read by any intelligent person. If you took any kind of film class in college, the odds are excellent that they wrote the textbook.

But I stray. Where do they sit? At Ebertfest every year, I walk on stage and look straight down before me, and there they can be found, usually in the second row, more toward the side of the stage the podium is on. This is in keeping with their preference for the front, and Kristin's policy at a lecture to sit as close to the speaker as possible. She does this even more carefully when it's a Q&A with a film director, because, she writes, "you get a good chance at an autograph."

Let that sink in. She is one of the most respected of all film scholars, she's been doing this for years, and she's still such a fan she collects autographs. That reveals a love of movies that is essential for any professional critic. Some critics write like they're chewing on anchovies. A movie is guilty until proven innocent. They feel weak when they fall for one.

David and Kristin sit up front because they like to. "DB," as he signs himself, doesn't go into deep theory, preferring to share memories of times he sat up front in Paris, the Virgin Islands, Bologna, the Sundance cinemas in Madison, the Cinematheque Francais, and no doubt Hong Kong, since he is the leading authority on HK films. 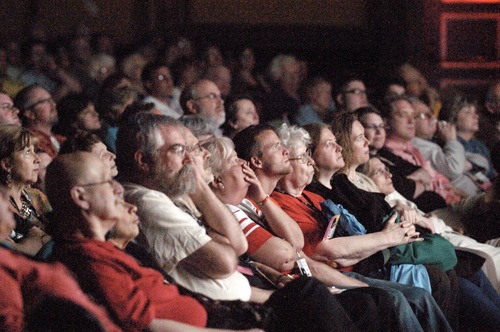 I know other good critics I can always find in the front row. The Lake Street Screening Room, where Chicago critics see most of our movies, has only about 60 seats, and no seat is all that far back. But up there in front you can unfailingly find Jonathan Rosenbaum, Michael Wilmington, Ignatiy Vishnevetsky and Peter Sobszynsky. I was amused that David ran a photo on his blog showing Kristin in the front row at Bologna and, yep, right there in the same row was Jonathan.

Where do I like to sit? Growing up, I always liked to sit somewhere in the middle. After I got the Sun-Times job I idly asked my optometrist where one should sit. "Twice as far back as the screen is wide," he ruled. To that advice I made a refinement: I prefer an aisle seat on the outboard side of the aisle. Outboard? Imagine a theater with two side aisles. I want the side of the aisle at a greater distance from the screen, so that I can look diagonally across the aisle, and not have to peer over a taller person in front of me. This is especially useful if the movie has subtitles and somebody's head might obscure them.

My theory was proven a few years ago at the Toronto Film Festival, where at the press premiere of "Slumdog Millionaire," I found myself behind a towering film critic. The film for some reason doesn't have centered subtitles but parks them over to the side, and the giant was leaning in such a way that he almost completely blocked them. I tapped him on the shoulder. He didn't move. I tapped again. I couldn't speak, which would have cleared things up, but he wearied of my taps, leaped from his chair, and whacked me with the Toronto program book, which that year had about 400 pages. This was his misfortune. He possibly thought I was a fanboy or a little old lady, and had no idea he was whacking a universally beloved figure who couldn't speak because of cancer.

Where do I sit in the Lake Street Screening Room? Despite all I've just said, for at least15 years I've always seated myself in the back row, at the end closest to the door. There's some history here. Gene Siskel liked to sit somewhere in the center, but I began to notice he'd repositioned himself in the back row. Gene was acutely aware of his surroundings. I asked him why he'd changed.

"I've noticed that the publicists have started to sit behind me," he explained. "I think they're supposed to spy on my reactions and report back to the studios." I doubted this was true, but now I became aware of Siskel sitting behind me, possibly to spy on my reactions. So I moved to the back row to outwit the son of a bitch. I picked the end of the row nearest the door, so I could sneak out to the men's room without calling undue attention to myself. Most people have bladders the size of oil drums, but I usually have to pee at least once during a movie. A few of my colleagues share this need, and I am sympathetic while watching them bend over and make a Groucho Marx run in front of the screen in the futile hope that no one will notice them.

Bordwell's blog entry is admirably complete. Isn't it a problem, you might ask, that in the front row before a giant screen he has to keep moving his eyes back and forth? Yes, but he likes doing that, and I learned a new word. "Speaking for myself," he writes, "I like scanning the frame in great saccadic sweeps and even sometimes turning my head to follow the action. CinemaScope and Cinerama give your eyeballs a real workout." Great saccadic sweeps! Now there's a writer for you.

And isn't it a problem if you're in the front row but way over to one side? No: "Even the keystoned angle isn't a problem, partly because of our old friend perceptual constancy." I looked up "perceptual constancy," which was not an old friend of mine, and it explained everything. Bordwell adds a caveat. "Note that I said front-zone," he writes. "Not every theatre favors front-row sitting. Kristin and I once went to a screening of 'An Autumn Afternoon' in a tiny Parisian house, one of those that seem to have been carved out of a loading dock. We sat in the front row, but that was a mistake. We could put our feet up against the wall housing the screen, and we reckon we watched the movie at something like a 45-degree angle." Try perceptual constancy on that.

Regarding the audience photo in center of this entry: Nate Kohn, the director of Ebertfest, writes me: "This is one of my favorite Ebertfest photos. Note Bordwell in the second row. Kristin is next to him. You can pick out a couple of other familiar faces." David has the grey beard. Kristin is to his left.