On the 68th birthday of the greatest

It has been one of the great honors of my life to be a friend of Muhammad Ali. We met first when I was chosen to accompany him on a good-will tour to Japan. After a week together in Tokyo, we were friends, and after that I spent years traveling the world with him. On humanitarian missions and promotional tours, and even twice on secret diplomatic missions covertly arranged by the White House.

For a kid like me, just twenty-eight years old when I became a close friend of the most famous and most beloved man on earth, what a life it was. I was meeting presidents and kings and dictators. I was enjoying the elaborate spectacle of Mobutu Sese Seko's birthday party for his wife; or, actually (and this part was said to be a Zairian state secret) for his identical twin wives. I was in the Bahamas, in Muhammad's last training camp, sitting around the rec room with Muhammad and his best friend Howard Bingham and others, cheering on John Travolta as he danced around the room swinging Muhammad's wet jock strap over his head.

I was learning my reaction to gunfire (not good), when shots are fired in Muhammad's bedroom by his bodyguard Chicago cop Pat Patterson when a riot of pissed off sparring partners and spit bucket carriers breaks out a few hours before the last fight of Muhammad's career, and the bullets happen to miss me and my groin by less than six inches before ripping into a dresser and through a couple of Muhammad's shirts; when that happens, I learned, I don't handle gunfire all that well.

I was falling in love with beautiful women glimpsed across the room in nightclubs. I was meeting half the journalists on earth and learning how to deal with them. I was up late with Muhammad -- in hotel suites, when everyone else was asleep, and after he'd had a catnap -- talking about philosophy and religion and power and pussy. Of all Muhammad's favorite topics, and all mine, those were the ones which overlapped.

And for all the hundreds of hotels I must've stayed in with Muhammad, I also must've spent the night in Muhammad's home in the Hyde Park neighborhood of Chicago and the Hancock Park neighborhood of Los Angeles, and on his farm in Michigan, at least 50 times, because Ali was not the kind of man to let you stay in a hotel, not if you were his friend and he had room for you.

He is probably the best man I will ever meet. He is wise, thoughtful and generous, and I believe that's why he is universally beloved. It's not only that he was the heavyweight champion. He transcended boxing and sports. It's that he is a champion in his very soul.

I write this on the occasion of Ali's 68th birthday. If he were in better health, he would be in Haiti right now. 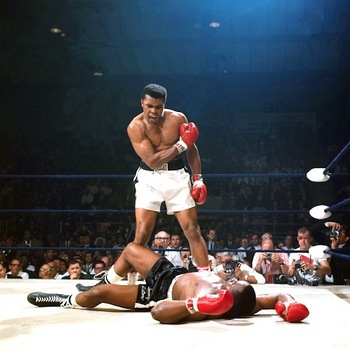 There was always the sweet Muhammad and the angry, crazy, righteous Muhammad. What you were hearing, of course, when you heard those conflicting voices inside Muhammad, were echoes of Cash and Bird.

Cash was Muhammad's nickname for his father, Cassius Marcellus Clay, Sr. A wild man, womanizer, and braggart of biblical proportions. "He ain't the greatest," Cash would say indignantly when someone fawned over his son. "I'm the greatest."

Bird was Muhammad's nickname for his mother, Odessa Clay. You'd have to look a long time to find a sweeter, kinder woman.

Once you knew them, you came to realize that Cash and Bird have been warring inside their son forever. And that, as Muhammad ages, Bird is winning.

And now Muhammad is age 68.