Okay, already! I won't watch! Now are you happy? 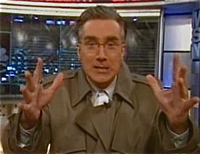 I would like to apologize to CNN, MSNBC and Fox. I admit my guilt. I watched them on satellite TV. They told me not to. Every time I tuned in, they were advising me to visit their websites, visit them on Facebook, send them e-mails, join their chat rooms, post a comment, Twitter. Yada, yada, yada. I could even check when the polls closed in 49 states I don't live in, even though I voted early. I don't think it was sexual, but I grew alarmed every time Wolf Blitzer asked to Twitter me.

I go way back in the news business. I remember when newspapers refused to run TV listings. Why the hell should we help them out? It was like Safeway telling you about the specials at Kroger. Now I watch the news, and they tell me I'm in the wrong place. "Instant updates on our web site!" they say. "Become an iReporter and send in your cell phone videos!" "E-mail me at cafferty.com and see your e-mail and hundreds of others." Now why would I want to do that? Surely it can't be that much more entertaining than watching Jack Cafferty. As far as I can tell, he's employed full-time urging viewers to go somewhere else.

Some of the iReports from Hurricane Ike were terrific. Not so much the iReport about how four people in Shaker Heights got ballots with a missing page. The writer-producers get paid to whip this stuff together and feed it to the on-air people. Ideally, this should be an invisible process. Not lately. I'm watching and the anchor interrupts himself. "This just in! There's a breaking development! I just got an e-mail from my producer!" He swivels around and says, "Can you zoom in over my shoulder, Joe the Cameraman?" We see illegible dots on the laptop screen. "Looky here!" the anchor says.

It used to be a joke that anchors were only "news readers." Now we have to read the news ourselves. At least Cafferty prints out his messages and displays them on the screen. People our age enjoy something we can see, like a print-out. The young people today, they think paper is something they use in the smallest room in the house.

I checked out Twitter. This is the deal. People can Twitter you. You can Twitter them This can be done with your cell phone. "N line @ Safeway. How U think $'s are at Kroger?" I have a friend who says he mingles with 9,000 Twits. I would rather gnaw the ears off a dead moose. I visited Wolf Blitzer's page on Facebook. He spelled his last name wrong. He has some cute friends. That Daaneyal Khan got his or her chin cut off.

Oh, and I can get instant, instant!, INSTANT! election returns online. This is thrilling. I try to spot tiny red numbers changing. It's more exciting than watching a presidential debate where the CNN pundits award the contestants positive and negative votes. Wait! Did that used to be a 9? Did it just shimmer into a 10? With all their computers do you think they could provide a running total of pundit votes? Nooooo. It might crash their hard drive. It was fun when a GOP pundit went haywire and starting voting Democratic. Anderson Cooper called him on it. "I got the buttons confused," the guy confessed.

That Anderson Cooper, he gets around. One night it's Election Central, the next night he's testing the grass roots in Montana, then he's clinging to a tree in Galveston. He's like those Daily Show correspondents who are always the same, only their title changes. And don't get me started on John King and his Magic Map. Man, does he get excited by what might happen. "If I push Virginia and Florida and Rhode Island, see how the map looks! And then if you add in California and that single Nebraska vote, take a look at this!"

"Is CNN tentatively prepared to call this a potential landslide, or did you cough on the map?"

I liked it better when they had Jeff Greenfield standing in front of the plain old wall map. When Jeff stuck a state with a thumb tack, you knew that state was nailed. I'm terrified that the usually remorseless John King will have an off night, brush a Swing State with his elbow and change the outcome. Wolf Blizter must be a slow study. He's been doing this for years, but he's still asking, "John, what do you think would happen if you tapped Montana? Could Anderson Cooper feel it?"

I just saw Ali Velshi bragging they've received 30,000 e-mails complaining about voting irregularities. They probably channel them to a call center in Bangladesh. "Hello? Ninth Ward? New Orleans? Louisiana? Joe Plumberji. I am calling you from right there in America! I am wondering if these vote fraudsters were wearing sport shoes? Nikes? I desire the New Balance. I am seeing your Ward Number Nine on telly, when you were having the Katrina. After our typhoon, I feel as if I am seeing Louisiana from my house!"

I watch a lot of CNN because they're trapped in the middle. For a break, I surf to Fox and MSNBC. Bill O'Reilly, what a guy. He invites Barney Frank on his show, and spends the whole time screaming at him. He could save satellite costs by renting an inflatable doll. Over at MSNBC, Keith Olbermann is always astonished. "What?? Bush is lying again?? You're kidding me!!" The next day, "What??? Bush is lying again??? You're kidding me!!!" And on Thursday, "What!!!!! Bush is...etc." He has an unending capacity for counterfeit astonishment. By Friday, I'm sitting at home shouting at the screen: "Keith! Keith! He did it again today!!!!!."

There may perhaps be a light at the end of the tunnel. We will never, ever, again, after this week, have to listen the endlessly chanted slogan, "The Best Political Team on Television!" To quote the saddest line in all of Shakespeare: Never! Never! Never! Never! Never! We won't, will we?

Footnote at 11:40 p.m,CST: I have been watching. I must admit CNN can make a plausible claim to have the best political team on television. I was so moved by Roland Martin's eloquence. I admit John King was the master of the map. Wolf Blitzer was a steady captain. David Gergen was the very soul of probity. Anderson Cooper and Campbell Brown were spirited but sane. And interviewing a hologram? How cool was that? As the great Canadian director Guy Maddin just e-mailed me: "Even will.i.am appeared confused tonight when Anderson told him he was a hologram. It's only going to get better with future elections -- the best reason reason to live to 106!" Will.i.am plays Moto Moto in "Madagascar: Escape 2 Africa," and now he's Obe Wan Kenobi. So okay, CNN, you may have the best team, but just stop telling me.