"Nobody has the right to take another life" 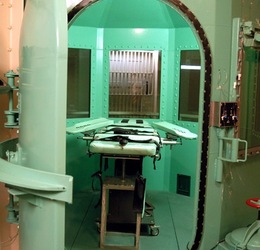 Yesterday I read this in an article in the British Guardian newspaper:

"Twelve of the last 13 people condemned to death in Harris County, Texas were black. After Texas itself, Harris County is the national leader in its number of executions.

"Over one third of Texas's 305 death row inmates - and half of the state's 121 black death row prisoners - are from Harris County.

"One of those African Americans, Duane Buck, was sentenced based on the testimony of an expert psychologist who maintained that blacks are prone to violence. In 2008, Harris County District Attorney Chuck Rosenthal resigned after sending an email message titled 'fatal overdose,' featuring a photo of a black man lying on the ground surrounded by watermelons and a bucket of chicken."

I could pause at this point, type "case closed," and consider this a blog entry. But that would be too simple. White people are also executed at an efficient pace in Texas. The odds of being given the death penalty in that state are fearsome, and the chances of having your sentence overturned on appeal are dismaying. So far in his two terms in office, Rick Perry has declined to commute the sentences of 235 condemned prisoners. During George W. Bush's time in office, Texas executed 152 prisoners, more than any other governor in modern American history before Perry.

Bush commuted the death sentence of one prisoner, Henry Lee Lucas, who had been charged with murder in 189 cases and "was once listed as America's most prolific serial killer." (Wikipedia.) His decision was recommended by the Texas Board of Pardons and Paroles, based on evidence that on the day of the specific murder Lucas was convicted of, he was not in Texas. Perry has commuted the death sentences of two prisoners, both also on the recommendation of the Board of Pardons and Paroles. It would appear that if the board rejected your appeal, your chance of having the sentence overturned by Bush or Perry was zero. 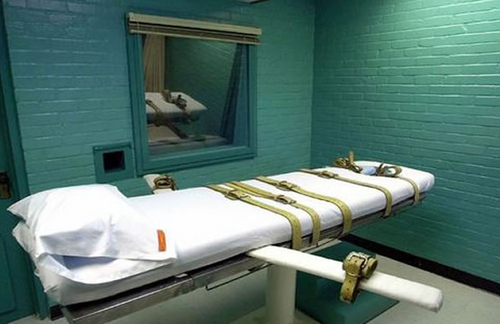 In 2000, Illinois Governor George Ryan, a Republican, declared a moratorium on the death penalty in Illinois. In one fell swoop he commuted 160 death sentences to life sentences. Ryan explained that he believed execution was appropriate in the case of "heinous crimes," but noted that during his first year in office "Thirteen people were released from jail after appealing their convictions based on new evidence." (Wikipedia) I was at a dinner party with Ryan at about that time, and he told us, "The possibility that we would be executing an innocent man made it impossible for me to sleep at night."

I think Ryan's reason for declining to enforce the death penalty is sufficient in itself. Executions are carried out in behalf of Society, which means you and me. Traditionally in human history they have been viewed as punishment: If an eye for an eye, then why not a life for a life? In recent America history the argument is used that they will act as a deterrent, although I believe few murders are prevented as a result. In some cases, more people die, because if one victim is unintentionally killed in the process of a crime, more are likely to be killed to eliminate possible witnesses. The death penalty essentially acts as a reason to kill.

If an execution takes place in an atmosphere of great care and caution, as it should, there is at least some reason for Society to feel confident a guilty man is dying. In a state like Texas and a county like Harris, there is little reason to be sure of that. I suggest it is impossible that the judicial system functions with 100% accuracy, and yet that is what the actions of governors Bush and Perry assume. On the basis of Death Row inmates found innocent and released in Illinois and other states, it is impossible that all 387 people executed during their terms were guilty.

Werner Herzog's recent documentary "Into the Abyss" concerns two young men who were then in prison. Michael Perry was on Death Row in Huntsville, and on the day Herzog spoke with him had eight days to live. Jason Burkett, his accomplice in the stupid murders of three people, was serving a 40-year sentence. They killed because they wanted to drive a friend's red Camaro. Why did Perry have to die but not Burkett, when both were convicted of the same crimes? In the film Herzog speaks with Burkett's father, Delbert, who is also in prison serving a life sentence. In his testimony at his son's trial, he blamed himself for the boy's worthless upbringing. His regret apparently influenced two women jurors to pity the son -- or perhaps identify with the father. It was Michael Perry's bad luck to lack an equally compelling witness. And that is how death and life were meted out in Huntsville. 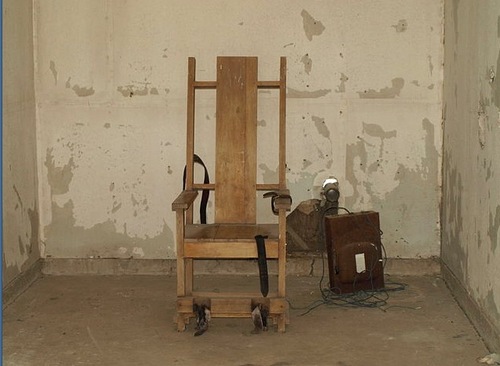 The most spellbinding passage in the film involves Captain Fred Allen, now retired, who was long in charge of the guard detail on Huntsville's Death Row. Allen and his detail were responsible for guarding the convicted prisoners, enforcing Death Row rules, arranging visits with outsiders, serving their last meals, walking with them down the Last Mile, and supervising the machinery of execution. This could be a process involving several years. In a few cases the guards grew close to some prisoners.

Even though he interviewed each of his subjects on camera only once, Herzog has success in drawing them out and getting them to trust him as someone they could confide in. The director remains almost entirely off screen, with his subjects looking directly at the camera. Allen explains that after 16 years as a prison guard, he resigned and took up work as a carpenter, forfeiting all his vested interest in the state pension system. Allen's monologue is an impassioned prose passage. This transcript is not directly from the movie, but is very close:

"I was just working in the shop and all of a sudden something just triggered in me and I started shaking. And then I walked back into the house and my wife asked 'What's the matter?' and I said 'I don't feel good.' And tears -- uncontrollable tears -- was coming out of my eyes. And she said 'What's the matter?' And I said 'I just thought about that execution that I did two days ago, and everybody else's that I was involved with.' And what it was something triggered within and it just - everybody -- all of these executions all of a sudden all sprung forward.

"It's just like taking slides in a film projector and having a button and just pushing a button and just watching, over and over: him, him, him. I don't know if it's mental breakdown, I don't know if . . . probably would be classified more as a traumatic stress, similar to what individuals in war had. You know, they'd come back from war, it might be three months, it might be two years, it might be five years, all of a sudden they relive it again, and all that has to come out. You see I can barely even talk because I'm thinking more and more of it. You know, there was just so many of 'em.

"My main concern is right now is these other individuals [guards]. I hope that this doesn't happen to them -- the ones that participate, the ones that go through this procedure now. And I will say honestly -- and I believe very sincerely -- somewhere down the line something is going to trigger. Everybody has a stopping point. Everybody has a certain level. That's all there is to it."

And then Captain Fred Allen, who walked into the death chamber with more than 100 prisoners, concludes by giving voice to the strongest argument against the death penalty:

"Nobody has the right to take another life."