My vocation as a priest 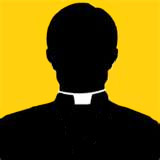 It was my mother who decided I would be a priest. I heard this beginning early in my childhood. It was the greatest vocation one could hope for in life. There was no greater glory for a mother than to "give her son to the church." I speculated that my mother had given me birth with the specific hope of passing me on to the church.

There was a mother in our congregation at St. Patrick's, Mrs. Wuellner, who had achieved the enviable distinction of giving two sons to the church, Fathers Frank and George, and these two good men came once to visit us at our home, possibly to inspire me.

My father, raised as a Lutheran, attended St. Patrick's only on such occasions as midnight Mass on Christmas Eve. I remember sitting in a front pew with my First Communion class and noticing Father McGinn glancing toward the back of the church. I became convinced that my father was sitting down when he should be standing up, or otherwise indulging in disgraceful Non-Catholic behavior, and I wanted to turn around but didn't dare.

My father stayed out of it. On most Sundays he stayed at home. He explained this gave him a chance to read the Sunday funnies before I wanted them. That seemed to me an excellent reason for staying home. There was also the problem that he would lose his immortal soul, having been offered the opportunity for salvation through the Church and renouncing it. I remember an occasion when my mother, briefing me in the kitchen, deployed me into the living room to pray on my knees beside his chair, beseeching heaven for his conversion. My father was a good sport about this and thanked me. He said he needed some time to think it over. 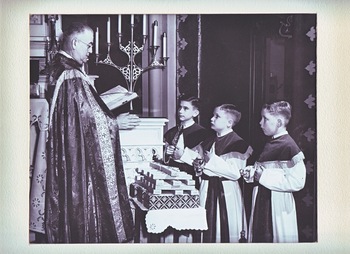 In my childhood the Church arched high above everything. I was awed by its ceremonies. Years later I agreed completely with Pauline Kael when she said that the three greatest American directors of the 1970s--Scorsese, Altman and Coppola--had derived much of their artistic richness from having grown up in the pre-Vatican Two era of Latin, incense, mortal sins, indulgences, dire sufferings in hell, Gregorian chant, and so on.

The parish priest was the greatest man in the town. Our priest was Fr. J. W. McGinn, who was a good and kind man and not given to issuing fiery declarations from the pulpit. Of course in Catholic grade school I took the classes for altar boys. We learned by heart all the Latin of the Mass, and I believe I could serve Mass to this day. There was something satisfying about the sound of Latin. Introibo ad altare Dei. Ad Deum qui laitificat juventutem meum.

"I will go to the altar of God. The God who gives joy to my youth." There was a "thunk" to the syllables, measured and confident, said aloud the way they looked. We learned in those classes when you stood. When you knelt. When you sat during the reading of scripture and the sermon. When you rang the bell, when you brought the water and wine. How to carefully hold the paten under the chins of communicants so a fragment of Holy Eucharist would not go astray. Later, there were dress rehearsals on the St. Pat's altar.

For years I served early Mass one morning a week, riding my bike to church and then onward to St. Mary's for the start of the school day. On First Fridays, the Altar and Rosary Society supplied coffee, hot chocolate and sweet rolls in the basement of the rectory. When you served at a wedding, the best man was expected to tip you fifty cents. When you served at a funeral you kept a very straight face. During Lent there were the Stations of the Cross, the priest and servers moving around the church to pause in front of artworks depicting Christ's progress toward Calvary. Walking from one station to the next, we intoned the verses of a dirge.

At the cross, her station keeping, Stood the mournful mother weeping, Close to Jesus to the last.

This was the Stabat Mater in English, we learned. Of course it had been written in Latin. You could go anywhere in the world and the Mass would sound the same, we were told, and the priests could all speak with one another in Latin. The dissolution of that practice at Vatican Two was the end of something that had survived for nearly two millennia. I loved the idea of Latin. I loved the hymns, especially Tantum Ergo, the solemn song at the Consecration of the Eucharist, which had been written by Thomas Aquinas.

I absorbed all of this and in those years never questioned it. In school every morning, the first period was given over to Religion, and especially in seventh and eighth grade Sister Rosanne permitted free-wheeling discussions in which we debated degrees of sin and salvation and had heated theological discussions. She didn't pound dogma into us. She seemed, as I think of it, fond and amused. When she celebrated her 102nd birthday at a Dominican mother house, I pulled a string and got her mentioned by Willard Scott on the Today program. After her death, I received a note from one of the other nuns there. She was winning at Scrabble right to the end. 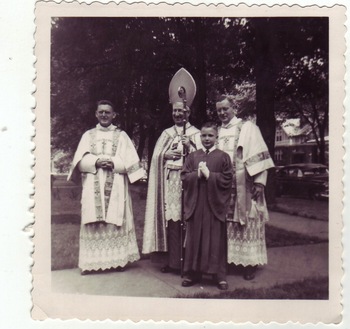 I was never abused in any way by any priest or nun. One incident remains vivid to this day. When I was perhaps eight years old, and new to serving Mass, my mind emptied one morning and I made a mess of it. When we returned to the sacristy, I burst into tears. "I'm sorry, Father!" I sobbed, and he sat down and took me on his lap and comforted me, telling me that God understood and so did he. Today, tragically, the idea of an altar boy on a priest's lap has only alarming connotations. On that day Father McGinn was only being kind, and I felt forgiven.

My mother continued with her assumption that I would become a priest. When I was 13, I was sent for a three or four day Retreat at a seminary run by the Diocese of Peoria. We boys were to be given a glimpse of the training ahead of us. I remember two things in particular: A fiery version of a sermon I believe was then known to all Catholic boys (even Stephen Dadelus), with a lurid description of the unimaginable torments of infinite duration awaiting any boy who committed the sin of impurity. And then an interlude after lunch were we sat on the grass and chatted with actual seminarians, who were older and casually smoked as they discussed vocations, ours and theirs.

I was already a little smartass, and asked my seminarian: "If Hell is the way they describe it, how can the punishment for impurity be worse than the punishment for anything else?" The seminarian smiled condescendingly. "The notion of levels of Hell comes from Dante," he said. "He was a great poet but an amateur theologian. See, that's the sort of thing we study."

I was a voracious reader in grade school, and early on began to question the logic of various tenets of the faith. To be informed it was necessary for me to believe, just simply believe, was not satisfactory. If God was perfect, I reasoned, how could He create anything that contradicted with His creation? This conclusion, reached in grade school, was later to lead me like an arrow to the wonderful Theory of Evolution, and to Creationism, which I found an insult to the Divine.

At some point soon after my discovery of Playboy magazine I began to live in a state of sin, because I simply could not bring myself to confess certain transgressions to a priest who knew me and could see me perfectly well through the grid of the Confessional. Logically I was choosing eternal torment over a minute's embarrassment. This choice was easy for me. When I saw Harvey Keitel placing his hand in the flame in "Mean Streets," I identified with him. The difference between us was that long before I reached the age of Charlie in the film, I had lost my faith. 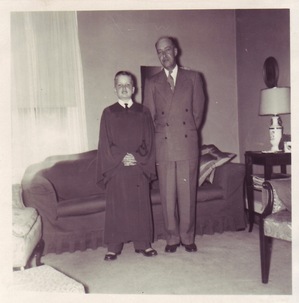 With Uncle Bill Stumm on my confirmation day

It didn't make sense to me any longer. There was no crisis of conscience. It simply all fell away. I remained a cultural Catholic, which I interpret as believing in the Social Contract and the Corporal Works of Mercy. I didn't believe then, and don't believe now, that it is easy to subscribe to the teachings of the church and not consider yourself a liberal.

I got my driving license and my first car at 16. By then I was working for The News-Gazette, and came home at 2 a.m. after helping put the Sunday paper to bed and stopping off with Hal Holmes and Bill Lyon at Mel Root's restaurant across from the courthouse in Urbana. This was my excuse to sleep late and go to the 10:30 a.m. Mass. What I began to do instead was buy the Chicago papers and read them while parked in my car in Crystal Lake Park.

In high school, I took Latin for two years at my mother's insistence. She said I would need it when I "got my vocation." Mrs. Link, our Urbana High Latin teacher, was a cutie who wore smart tailored suits and high heels, and her classes were elegant performances. I enjoyed them, although I was as bad then as now at rote memorization.

I never told my mother I wouldn't become a priest, but she got the idea. Even after starting work in Chicago, I never found the nerve, when we were visiting each other, to not attend Sunday Mass with her. She knew well enough those were the only times I went to church. What I was doing, I suppose, was going through the motions to respect a tradition that was more important to her than to me. She believed in the faith until the hour of her death. In her final days, she lapsed into a comatose state. She didn't respond to questions, and her eyes remained closed. Under her breath, barely audible, she repeated the "Hail, Mary" over and over. She was buried from St. Patrick's Church, and I tipped the altar boys.