My career in retailing 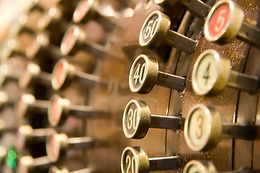 Now that I've been fired by Amazon, my brief career in retailing seems to be at an end. Was it only last November I was assuring Chaz I could make a quarter of a million, easy, in Amazon commissions? After all, between Twitter and Facebook I had 440,000 customers in the store every day, and if 2% of them bought a DVD, that would work out to...

I tried to remember where the decimal point went, and Chaz told me to get right back to her when I had it worked out. Apparently I could clean up something between $37 a day and $37,740 a day. Somewhere in that range. (By the way, if you use ad blocking software, many of my references below may seem odd.)

Amazon has this deal where you register as an Amazon Associate and get a percentage from anyone who comes to Amazon and buys something through your coded link. It doesn't matter what they buy, if they do it on the same trip. For example, I could pitch a 99¢ MP3 download by Justin Bieber, and on the same shopping trip someone might decide to buy themselves a nice electric bike.

You see where that could lead. I went into a frenzy of salesmanship. This was not greeted by my Followers and Friends with messages of gratitude for the bargains I was finding them. My so-called Friends on Facebook starting asking. "Has Ebert's account been hacked? Why is he shilling this shit?"

I wrote a blog entry to explain. I was trying to make money. I had these neat notions I wanted to try out on my website, and the Sun-Times had little spare change for such ideas as my dispatches from Far-Flung Correspondents in Brazil, South Korea, Turkey, the Philippines and so on. I found that posting their entries could take me an evening that I couldn't spare away from work. With income from my Amazon links, I could hire someone to do it. For example, no link I posted was ever more popular than this one:

I sold at least 150 of those over the months. It included a good many of his hard to find early silent films, and the price was right. Not that I made a fortune. I found that I was using up way too much time every day searching Amazon for good deals for my readers. I tried to link mostly to stuff I had, used and liked, for example:

...adding that all sizes and styles were nicely priced. I also did a big business in rice cookers, in connection with my cookbook The Pot and How to Use It.

I advised people to start their day with oatmeal...

But this could go on all day. Sometimes I tweeted rather eccentric selections, like a corduroy dress I thought might make a woman huggable. The women on my Facebook page said they would slap anyone who tried to hug them in it. But I did sell one dress.

That became the fascinating thing. Every morning I could log on, check the total of my commissions for the previous day, and then scroll down the list of what had actually been purchased by people using my links. There were no electric bikes, fur coats or diamond rings. I did notice significant sales for one book I had not linked. My readers apparently found it for themselves.

Not to worry. Amazon didn't reveal the names of any purchasers. They did, however, provide marketing tips:

A year ago, in an earlier money-raising scheme, I began the . This was to be a weekly email sent to those who donated at least $5 a year toward the upkeep of the site. I realized I didn't have the time to produce the Newsletter myself, and recruited a friend near Vancouver named Marie Haws.

This turned out to be a brilliant decision. Marie is a fine artist, animator, and creative web surfer, and soon her Newsletter became a hit. I kept being asked how many members we had. I kept that a secret. But the Newsletter finished its first year of publication a few weeks ago, and I was amazed to find that at the end of a year only three people had asked for refunds. We currently have about 5,800 members, and basically everyone has renewed at $10 a year.

So the Newsletter is a success and I am proud of it. Marie spends the better part of three or four working days on it, I pitch in some stuff, and readers contribute. The most common complaint is, "There's too much in an issue!" No, really.

Marie also designs and posts all the reports of the Far-Flung Correspondents, and special WebPages we create for the express purpose of Tweeting and Facebooking. You can find links to about 300 of these running down the right side of this page. The Newsletter and my Amazon income paid Marie's well-deserved salary, and left something over for discretionary additions to the site.

This all began as an experiment to see how a web site might hope to make money. Yes, we run real ads on rogerbert.com, but so far I have not actually seen any of that income, except in the form of my actual paycheck. It all goes into overhead. That's not the issue, anyway. The issue is: Most people think of the web as free, and like it that way. The decision of The New York Times to start charging for content will be closely studied, and I wish them very well. But pay sites in general aren't received well.

My question was whether other sources of income existed. I'm very pleased with the Newsletter. Chaz told me it was a mistake to charge $5, "since that's so low it doesn't make it look like it's worth anything." Marie, who monitors PayPal and MailChimp and can tell exactly what people are doing, says our new annual price of $10 has essentially been accepted by everybody--probably because the Newsletter is so good, and also because some people are willing to help me keep my main site, including more than 10,000 movie reviews, free.

Amazon, as I said, fired me. They cancelled their deals with all their Amazon Associates in Illinois after the state passed a law requiring out of state online sales to include the state sales tax. There's a movement to protest that law, but I haven't joined it. I think it's a fair law. Let's face it. Illinois needs money even more than my web site.

I feel a certain relief that I can no longer post Amazon links after April 15. I have a real job and a real life, writing for my site and helping to produce "Ebert Presents" on public television. I don't have the time to plunder Amazon for links I think might sell.

Also--well, it wasn't dignified. After the first jolt that I was "shilling" stuff, most people were good sports. Some newbie might complain about a link and the regulars would jump on him. Mostly what I got was curiosity: Can you make any money that way? (The answer: More than you might think and less than I might have hoped.) Every morning I took encouragement from seeing that a considerable number of people had actually purchased something, even though my percentage (on a Kindle book, say) might pay me 6¢. Sometimes I tweeted the daily free MP3 download, on the theory that, once in the door, people might buy something else.

It was fun there for a while. I began to play a sort of game on Facebook, where I'd sometimes post weird stuff just to be funny. Not bad stuff, you understand. Just things no one was expecting.