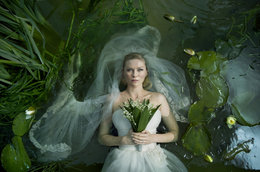 More than in previous years, I'm noticing the laptops in the audiences here at the Toronto Film Festival. Some of the bloggers seem to be beginning their reviews as the end credits still play. Then you see them outside, sitting on a corridor floor, their computers tethered to an electric umbilical, as they type urgently. Of course many of them share their opinions in quick conversational bursts, and a consensus develops. Most films good enough for an important festival, I think, require a little more marinating.

Certainly that's the case with Melancholia, the new film by Lars Von Trier. He seems to depart from every festival hobbling on whichever foot he's shot himself in this time, but can you deny he's one of the boldest and most original filmmakers of these days? I'm grateful that Magnolia screened it in Chicago before the festival began; as usual, TIFF seems to crowd the press screenings of all its films into the opening weekend.

Here is a film that requires additional time not to understand--it's quite transparent, for a von Trier--but to fully appreciate. It's subject is no less than the end of the world, as Earth collides with a vast planet named, yes, Melancholia. Von Trier explained that he had been going through an extended period of depression while making some of his previous films, "Antichrist" included. Now, having stopped drinking, he rebounded with this apocalyptic vision, which he cheerfully described as "my most optimistic film."

Alcohol is of course a depressant, and some people discover when they stop taking it that they bounce the other way, into inappropriate elation. That may somewhat explain von Trier's jolly statements about the Nazis which got him declared a "persona non grata" at Cannes last April. He thought everyone would know he was joking. "I'm no Nazi," he was forced to explain. Well, of course he isn't. But when you hear yourself having to say something like that, you know your mouth has raced heedlessly ahead of your mind. 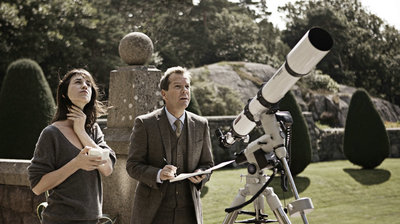 This is not the time for my proper review of "Melancholia," but let me just say a few words about its daring. Technically, it's science fiction, but this is a sci-fi movie like no other. As the new planet grows in the sky, there are no TV news updates, no Cabinet meetings, no nuclear rockets fired at it, no surging mobs in the streets of Delhi, London and San Francisco. Not even any supermarket riots--because with the world ending, how much bottled water do you need, really?

In fact, it is somewhat unclear in the early scenes what, exactly, the characters know about the phenomenon that first appears as the brightest of evening stars. It is noted with curiosity by Justine (Kirsten Dunst, never better), who with her new husband Michael (Alexander Skarsgard) is on her way to a post-nuptial party in the country. This party will involve not desperate world-ending drunkenness and sexuality, or prayer and meditation, or madness. Much of the time the impending calamity is not even the central subject of conversation. Von Trier has never made a more realistic domestic drama, depicting a family that is dysfunctional not in crazy ways but in ways showing a defiant streak of intelligent individualism. 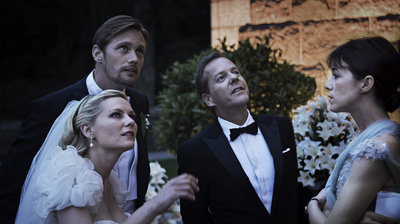 In any film involving the destruction of the globe, we know that, if it is not to be saved, there must be a "money shot" depicting the actual cataclysm. Assign a dozen other directors the challenge of creating a shot depicting such a catastrophe, and I doubt any could do better than von Trier does here. There are no tidal waves. No animals fleeing through burning forests. No skyscrapers falling. None of that easy stuff.

No, there is simply a character standing on a hill and staring straight at the impending doom, as von Trier shows it happening in what logically must be slow motion, with a fearsome preliminary merging of planetary atmospheres.

Violent death is often a shabby business in the movies. It happens in depressing bedrooms, bloody bathtubs, shattered cars, bleak alleys. Its victims are cast down empty of life. Here is a character who says, I see it coming, I will face it, I will not turn away, I will observe it as long as my eyes and my mind still function.

Is it fair of me to speculate that von Trier himself regards death in that way? He tends to be grandiose, but if one cannot be grandiose in imagining one's own death, then when is grandiosity justified?

We arrived here Wednesday, started seeing films Thursday, are booked up nearly wall-to-wall. This is not only one of the three or four major film festivals on earth, but one of the best-run and user-friendly. Wandering toward screenings, you encounter such as Atom Egoyan and Jason Reitman, directors not here to do business but--what do you know!--to see movies. The public waits dutifully in queues, as if making a silent protest against the shoving matches before screenings at Cannes. The four local dailies (!) cover it like the Washington Post covering a Presidential election.

Toronto announces the end of a summer of often disappointing and overinflated "blockbusters," and an autumn that feels like a springtime of the cinema. We'll be here until the end. More to follow.