"Life Itself," Steve James' acclaimed documentary on the life and legacy of Roger Ebert, was honored Saturday, August 2nd, with a Founders Prize Special Award at the tenth annual Traverse City Film Festival hosted by Michael Moore. On Sunday morning, Chaz Ebert made an unannounced appearance as part of the festival's annual event, "Mike's Surprise." Each year Moore offers a special event during the festival and this year his surprise was Chaz Ebert, with whom he conducted a general Q&A about life and the movies, prior to discussing "Life Itself."

Roger Ebert championed Moore's groundbreaking 1989 debut feature, "Roger & Me," giving it four stars while referring to its writer/director/star as "an irrepressible new humorist in the tradition of Mark Twain and Artemus Ward." Gene Siskel shared his fellow critic's enthusiasm for the film when the pair reviewed it on "Siskel & Ebert."

Moore started the Traverse City Film Festival ten years ago with the mission to show great movies that enrich the human spirit and the art of filmmaking. He and Chaz took part in a spirited conversation in which they discussed the value of the moviegoing experience and the vital role that an engaged audience plays in a film's impact and influence. In one of the event's highlights, Chaz asked the women in attendance if they agreed with her that it's okay to have men express their emotions. The women in the audience overwhelmingly agreed. (See video below.) She reflected on how Roger was never hesitant in displaying his love for family and friends and valued filmmakers who had the bravery to express their own feelings with sincerity. Roger's philosophy was never more apparent than it was on the big screen when "Life Itself" played in Traverse City, where Roger's honesty shined brighter than ever.

Ebert and Moore also discussed the value in seeing movies in theaters where you experienced them as a community. Moore said that the audience is an integral part of the movie-going experience, and without an audience, it isn't really a movie. A quick survey of the audience demonstrated that the vast majority of attendees would prefer the communal moviegoing experience offered by theaters, though Chaz stressed that there are certain situations in which VOD home viewing is more convenient. She also reflected on how Roger was an early adapter of technology and had predicted modern screening platforms as early as 1987.

For a list of the Traverse City Film Festival's other winners, visit the official site. For a complete list of the theatrical venues and VOD/online platforms currently screening "Life Itself," click here. For more information on the film itself, visit MagPictures.com/LifeItself. 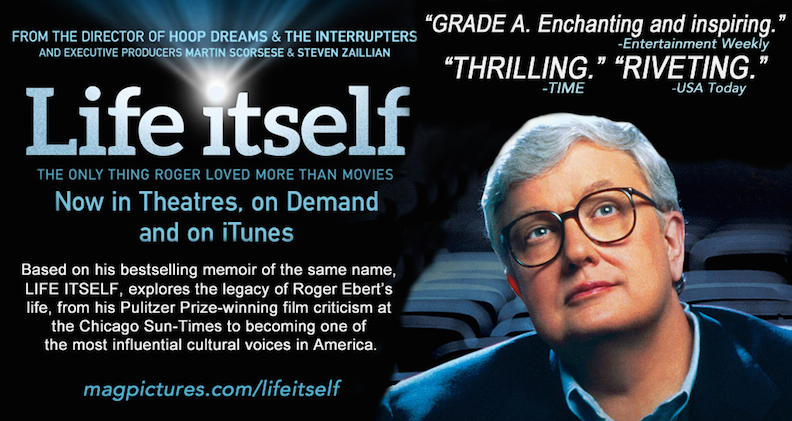