It moves! It speaks! It smells! 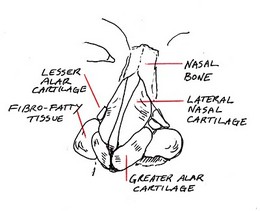 This week we'll be treated to a big advertising campaign for "Spy Kids: All the Time in the World in 4D." I have not seen the film, but I have experienced the process.

Yes, the Scratch-n-Sniff card is back, this time advertised as Aromascope. We have come a long way since Odorama and Smell-O-Vision. Well, maybe not that long a way.

It was May 1981 in Cannes. I had just left Le Petit Carlton, the legendary bistro on a back street behind the old Palais. Rainer Werner Fassbinder and his posse were gathered inside, looking as discontented as usual. I planned to walk down the Rue d'Antibes to the Hotel Splendid. After a block or two I found myself accosted by a press agent. He asked me if I was coming to the midnight screening of "Polyester."

"Polly who?" I asked. In France you never realize they're speaking English.

I said I hadn't been planning to. I had an 8:30 a.m. press screening of some prestigious new film by, who knows? Fellini, Coppola, maybe even Fassbinder.

"But it's in Odorama!" he admonished me. "This is the world premiere!" 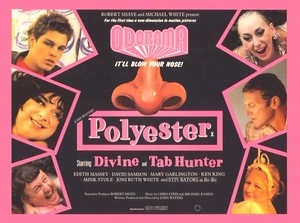 Obviously this was a must. In front of the Star Cinema, the usual unruly crowd was assembled on the pavement, blocking traffic, pushing, shoving and waving credentials. At Cannes you feel an urgency to attend movies you may in fact care nothing about. There's a now-or-never desperation. The existence of a queue serves only as a human arrow pointing to the point where line-crashers should butt in.

"This way," the press agent told me, leading me through a back door. I found myself inside the historic first screening of "Polyester," the most ambitious project so far by John Waters, the Baltimore sleazemaster whose earlier works included "Pink Flamingos," in which an overweight middle-aged transvestite named Divine consumed what did indeed actually appear to be excrement. That qualified him as uniquely entitled to employ the immortal punchline, "What? And leave show business?"

Divine's leading man in "Polyester" was Tab Hunter, who had come out of retirement. By this pairing with Divine he no doubt inspired his previous leading ladies to revise their resumes. The film's real selling point was its introduction of Odorama, which was revealed as a large Scratch n Sniff card with nine numbered and color-coded patches on it.

During the film, every time Divine started to sniff the air suggestively, a number flashed on the screen and I was required to scratch that number on the patch and sniff it. During the pizza scene, for example, I enjoyed the smell of oregano. I was also treated to gasoline, glue, and grass. At one point, an attractive aroma was suggested by a flower, but when I scratched my card I was caught off guard. John Waters' little joke. (Years later, on his commentary track, Waters chortled, "I actually got the audience to pay to smell shit!")

"Polyester" was a success for Waters, and scores above 80% on the Tomatometer, although to be sure the Meter voters are limited to those who actually chose to go see it. Despite its grosses, it did not inspire any further use of the process--until now, when Robert Rodriguez has resurrected it for "Spy Kids 4."

Somehow it doesn't surprise me that Odorama took many years to be perfected. Something called Scent-O-Vision was demonstrated at the New York World's Fair in 1939. Walt Disney considered incorporating smells with his "Fantasia" (1940), but decided against it. 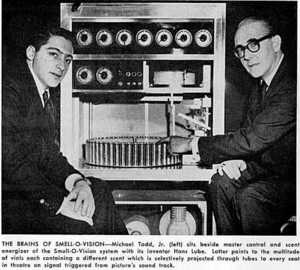 The great showman Michael Todd Jr. later obtained the patent of the 1939 process, and renamed it "Smell-O-Vision." It was much more ambitious than Scratch n Sniff. Wikipedia reports: "It used what he called a Smell Brain, which was a series of perfume containers linked in a belt, arranged in the order that they would be released. The belt was then wound around a motorized reel. As the film threaded through the movie projector, markers on it would cue the Brain. Needles would pierce membranes on the containers, releasing the scents, which would then be blown by fans through the pipes to individual vents underneath the audience members' seats. The cost of outfitting a theater to accommodate the system was anywhere between $15,000 at Chicago's Cinestage theater to $1,000,000 elsewhere."

Michael Todd owned the Cinestage (and, not surprisingly, the Michael Todd theater next door). It was there he introduced Todd-AO Vision for his "Around the World in 80 Days," and there, too, that "2001: A Space Odyssey" played in 70mm for many months. 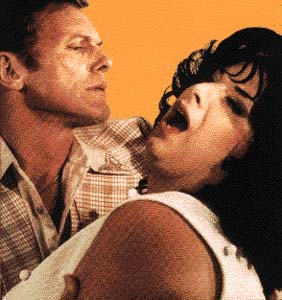 The experiment was not a success. Wikipedia again: "According to Variety, aromas were released with a distracting hissing noise and audience members in the balcony complained that the scents reached them several seconds after the action was shown on the screen. In other parts of the theater, the odors were too faint, causing audience members to sniff loudly in an attempt to catch the scent." Henny Youngman incorporated a review into his standup routine: "I didn't understand the picture. I had a cold."

There was another problem. Scents tended to linger in the theater air. Moviegoers entering a theater where Smell-O-Vision had been in use at earlier shows were greeted by a strange medley of unidentifiable odors that together resembled an olfactory compost heap. 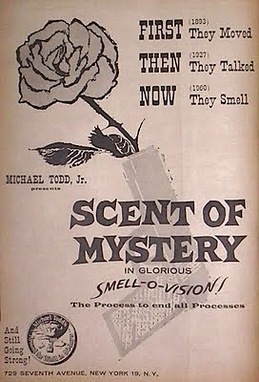 With the introduction in 1979 of the first Scratch-n-Sniff cards as marketing and educational devices, it was only a matter of time until John Waters realized the show business potential of the invention. One of his great heroes is William Castle, the innovative filmmaker who employed such gimmicks as The Tingler, Illusion-O, Emergo, Percepto, and a million-dollar life insurance policy on the star of 'Bug,' a cockroach.

After the passage of 30 years from that historic Cannes premiere, now here comes Robert Rodriguez to renew the tradition. I predict with confidence that "Spy Kids 4D" will be a great success at the box office, although it will require great restraint by the little monsters in the audience to resist scratching their cards all at once before the movie even begins.