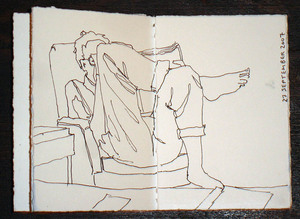 Of course I've never stopped reading the Sun-Times. That's the start of my daily ritual. But while I used to read four newspapers every day, I found that, gradually, I wasn't. You know how it is. You get mired in the matrix of the web and think you're reading all the news you can handle. You have the papers, but they're unopened at the end of the day.

However, during the election season and the Inauguration euphoria, I renewed our subscription to the New York Times and remembered, at first almost unconsciously, how much I enjoy reading a newspaper. The pages follow in orderly progression. The headlines and artwork point me to stories I find interesting. I am settled. I am serene. I read, I think. I am freed from clicking and the hectic need to scroll, to bounce between links. I don't have search for the print stories. They find me.

This morning, I went to Huffington Post and realized it had become too slow for me. Perhaps as a strategy to generate more clicks and longer visit times, they make it tricky to get to the god-damned stories themselves. I was intrigued by the screaming top-page headline: "Generals on Obama's Iraq Decision." I clicked on it. No story, of course, but I found myself on the Politics page, where I found the same screaming headline at the top, then a photo (the same one from the top page), and then a headline under that photo. I clicked on that head, the same technique I had used on the page that brought me here. This time that took me to a story about top-level secret talks. Nothing about the generals. I backed up a page. Scrolled down. No generals anywhere below. Only now, while writing these words, did I realize that I should have clicked on the top headline on the Politics page, which had not changed , although now it linked to an actual story. 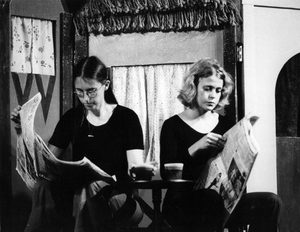 I guess I was a dummy. But I've had similar adventures on HuffPost many times. You click to a page, and then try to solve the mystery of where your desired story is on that page. Would it have been too much trouble for the original click to lead me directly to the promised story? No, but this way they got three times as many "page visits."

When I finally arrived at my story, the lead began: "WASHINGTON, Feb 2 (IPS) - CENTCOM commander Gen. David Petraeus, supported by Defence Secretary Robert Gates..." I scrolled down to find out what CENTCOM was. As a trained newspaperman, I know you don't use unexplained acronyms unless they're virtually words themselves, like USA, NATO, or NFL. Why didn't IPS know that? For that matter, what was IPS? HuffPost can be dodgy about revealing the sources of some of its news.

At the bottom of the story, I clicked on a link to "more from Inter Press Service," which I, a news junkie, had sadly never heard of. On the IPS page, I found "About Us:" 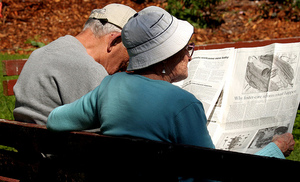 Apart from the British spellings of defence and globalisation, this told me nothing. What is the South it raises the voices of? What is civil society? "About Us" was obviously written not by a journalist, but in VapourSpeech. Note that every sentence begins with "IPS," but none of them explains the acronym. Must be house style. I clicked on the IPS offer to "Watch Our Presentation," and got a YouTube video. I listened to more than 90 seconds of vacuous generalisations. It seemed prepared to go on forever without caving in and telling me who ran it, where they were, and who paid the bills.

I checked out today's paper edition of the New York Times. The "Generals" story wasn't included. I checked out the NYT website. Also not there. In the judgment of the New York Times editors, this was apparently not a newsworthy story. I left the house to see a movie. When I went back online three hours later, the "Generals" story no longer led the front page, but had been demoted far down the page. Now it gets fascinating. I clicked on it, and was taken again to the Politics page, but the story was not there. Nowhere to be found. 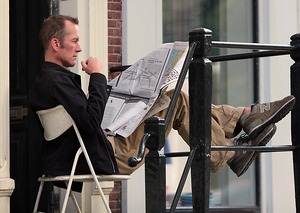 I was a driven man. I went to Google News, typed in "Gates Obama Iraq," and found two stories, one from the Daily Star in Lebanon, the other from the Global Post. The Lebanon link didn't work. The Global Post link was to a blog with a Super Bowl tie-in. I searched the New York Times with the same keywords. Only older stories. That's the insidious thing about getting your news from the internet. You're not always sure where it comes from, you get convinced it's important because of a big color headline, and then you find yourself careening down the rabbit-holes of hyperlinks.

A story that was apparently not even news had cost me time in which I could have finished half the New York Times, because I am a fast reader. I know, I know: How many people are going to start on the top page of HuffPost and end up with (1) the mission statement of IPS, (2) the Global Post, (3) Lebanon, (4) Google News, (5) Google news search, (6 + 7) twice at the New York Times web site and (8) once at the print edition? Just about none, I would guess.

That's not the point. The point is: I had only a cursory interest in the story in the first place. I clicked on it as a Pavlovian reaction, because it was in screaming red on top of the page. Too often on the web, I'm under the impression that I'm downloading vast amounts of news into my eager mind, when actually I am playing a sort of crossword puzzle of the news, substituting stories for letters. I get into a mind zone: Let's see what happens if I follow this link... 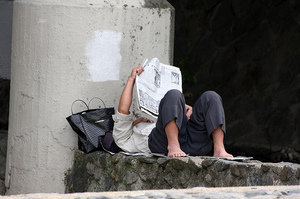 Reading an actual newspaper is more orderly ,and faster. It allows one to settle into a favorite chair instead of peering at a screen. Editors I trust have selected the day's news and placed a value on it. They have commissioned feature stories I would never have thought to search for, such as a Swiss village's deal with Marilyn Manson to bottle absinthe, the market for used mausoleums, and the growing preference of pro football fans for watching games on TV rather than in person. All of those stories were in the New York Times on Jan. 29. I put that issue aside so I could cite them in this entry, which I am writing on Feb. 2.

As it turns out, that was a good paper to save. I paged through it again, trying to recreate my original reading path. Reaching all the way across the top of page A8, I found this headline:

On Iraq, Obama Seeks Common Ground With Military on Plan for Withdrawal

Reader, there it was, four days earlier in black and white, printed on paper, the story I thought had reached me so urgently by the miracle of the internet.

IPS is a communication institution with a global news agency at its core. IPS raises the voices of the South and civil society. IPS brings a fresh perspective on development and globalisation. IPS tells the story underneath.