I shall wear the bottoms of my trousers rolled

Not long ago I read an article about a new skyscraper charmingly named The Shard that will be the tallest structure in Europe. I posted it on my Facebook page, adding something like: "Great! Just what the London skyline needs!" A reader quickly commented that I was showing my age.

It's wrong to criticize any opinion on the basis of the age of the person holding it. I've made the same mistake myself in rash attacks on those who prefer Michael Bay to, say, Ingmar Bergman. You can be any age and hold any opinion, although I would like to think that as we grow older our opinions reflect an improvement in our taste.

But enough about movies. Let's get back to skylines. The photos of The Shard I saw made it look like a structure for which The Shard is an excellent name. How can I put this? It looked like a very tall...shard. (Webster: "A piece of broken ceramic, metal, glass, or rock, typically having sharp edges"). Truth to tell, I like the look of the building. There are skylines where The Shard would fit in nicely. One of them is Chicago, where the first skyscraper was constructed, and whose skyline is a parade of tall buildings. Also New York. Hong Kong. You get the idea.

But let me try this out on you. How well do you think The Shard would work in Venice? I say it would be vandalism, and I say a great many people would agree with me. There is such a thing as harmony, as the essential rightness of things that seem to go together. Of order and proportion. Are there actual rules governing such matters? I don't know. But most of us have an instinctive taste in such matters, perhaps developed over the years by looking at many pleasing and proportional things. 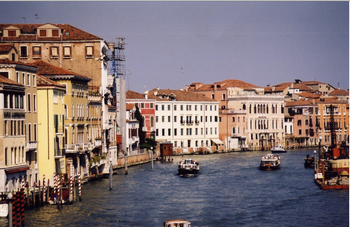 One of my London readers informed me that The Shard, at least, will rear its lonely spire in a district where it won't seriously disrupt famous skyline views of St. Paul's, Tower Bridge, and so on. London already has some tall buildings that in bizarre contrast to their surroundings. I invite you to Google The Gherkin. I rather like the Gherkin. It would add immeasurably to the skyline of Houston. 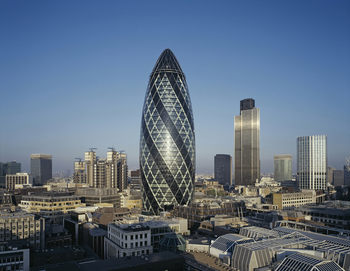 In matters of architecture and city planning, I am a traditionalist. I have a preference for cities that seem to have grown gradually and organically. I like old buildings. I like continuity. I read that San Francisco is about to lose Sam Wo (below), a 100-year-old chop suey restaurant that is famous for the rudeness of its waiters. It is a narrow three-story building, you enter through the kitchen, and for decades people have dined there until late at night. That's good enough for me. Just reading about it, I know I'd rather go there than to a Nouvelle Sino restaurant serving bite-sized pieces of dishes that are not ordinarily thought of as food. 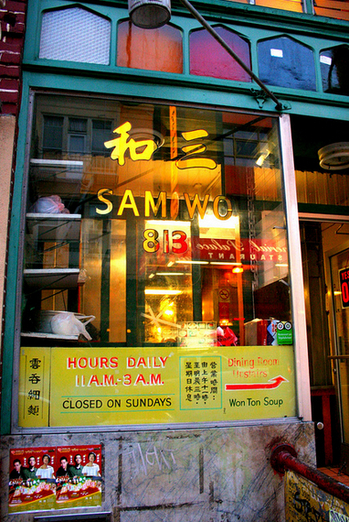 Faithful readers know of my fondness for Formica Restaurants. This is a place where the tables and counters are made of Formica, the waitresses call you "Hon," and breakfast is served 24 hours a day. I've eaten in places reputed to be among the greatest in the world, and it was an ordeal. Do they have French toast?

My traditionalism reaches in many directions. Please perform a mental exercise for me. Imagine a park bench. How does it look? Its seat and back should curve to roughly conform to the human body. Am I right? Here is one of the older benches in Chicago's Lincoln Park: 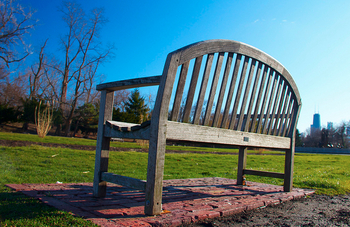 The has countless such benches. But recently, at great expense, the Lincoln Park Ponds were surrounded by a harsh concrete Nature Walk. A generation of shrubbery and trees were torn out. Traditional park benches, where people would sit to toss crumbs to the ducks, were replaced by flat concrete slabs. Half of each slab has no back at all. The other half has a perfectly vertical concrete shape. Not a curve to be seen. Impossible to sit on comfortably. In former years the benches were occupied by people reading books, or fishing, or necking, or stretching out their legs. How are the new benches used? They aren't used at all. Here is one of the new benches: 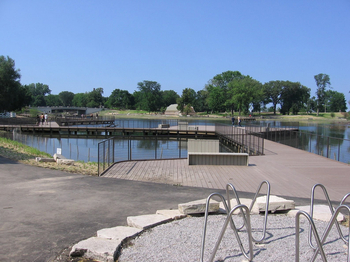 Form should follow function. There is nothing more futile than an architect whose designs seek to redefine the ways that people naturally want to sit on a bench, or look at a skyline. By the same token, in many parks the paved pathways follow the paths that people were following before they were paved. It's human nature. People don't walk on the grass just for the hell of it. They tend to do it only when it obviously makes sense. 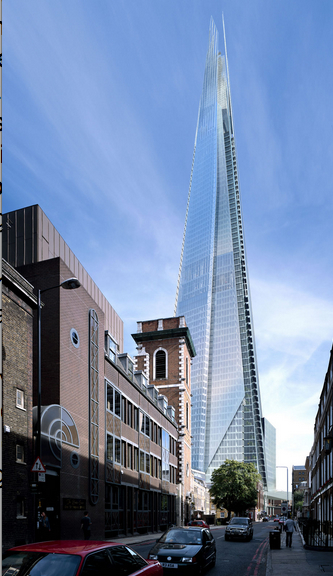