How Studs helps me lead my life 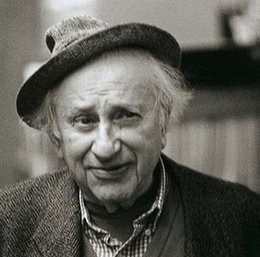 I got caught in the Indiana Jones whirlwind and allowed an important anniversary to pass unremarked: On May 16, Studs Terkel celebrated his 96th birthday. One of the great American lives continues to unfold. If I know Studs, the great day passed with calls and visits from friends, and the ceremonious imbibing of one (1) gin martini, very dry. I hope he has eliminated the daily cigar, but I'm not taking odds. If you don't know Studs, there are few people you can meet more easily in print. He is the greatest conversationalist I've met, the author of a shelf-full of books in which he engages people from all walks of life in thoughtful conversations about their own lives.

This life-work began with the best-seller Division Street: America, (1967), in which he talked to politicians and protestors, firemen and cops, actors and salesmen, saints and thieves. These conversations were engendered by the daily radio program Studs did for decades on WFMT, Chicago's fine arts station, on which morning after morning he would demonstrate that he had actually read an author's book, or seen the play, or attended the performance, or visited the place.

Studs has an insatiable appetite for people and the things they do, and may have read as many books as anyone alive. Over the years his attention to the world he lives in has made him a one-man cross-reference. I remember appearing on his program once and mentioning Buster Keaton. Studs paused the tape recorder, rummaged around on a shelf, and produced a tape of Keaton himself, talking about the very same topic.

I met Studs very soon after I moved to Chicago. It was in the Old Town apartment of Herman and Marilu Kogan; Herman was the author and Chicago Daily News editor responsible for getting me hired at the Sun-Times. The evening was all conversation, nonstop, and all consequential: No small-talk or idle chat for these people. I felt as if I'd been put at the same table with the grown-ups.

Not long after, the (now) Nobel Prize-winning novelist Doris Lessing visited Chicago. Studs knew I had read all her books while studying at the University of Cape Town, and he also knew, more importantly, that I had a car and knew how to drive. Studs has never learned how to drive; he enlisted me as chauffeur and I spent two unforgettable days observing Studs showing Lessing his own Chicago. 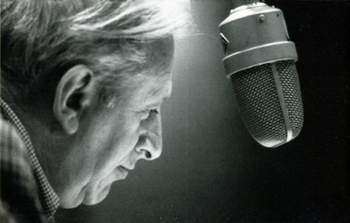 My purpose today is not to repeat the same stories, but to tell you how the example of Studs Terkel is helping me live my own life. As you know, I've had a lot of health difficulties over the past few years. After surgery for jaw cancer, I'm told I am cancer-free. But I had operations to repair the cancer's damage, and these surgeries resulted in life-threatening situations. In recovery, I had treatment at the Rehabilitation Institute of Chicago, was restored to health and fitness, was up and about, was even hiking in the foothills at Rancho la Puerta in Mexico. The surgeries failed to restore my ability to speak, but I was healthy and cheerful. I went back to reviewing movies on a full-time schedule.

After the latest restorative surgery in January, I was again very ill, again landed back in the R.I.C., was restored a third time, and again returned to work. To get into good shape for the Ebertfest in April 2008, my wife and I went to the Pritikin Longevity Institute in Florida, where I've gone for 15 years or more to benefit from their wise programs. On our second day there, I tripped on a rug, fell, and broke my hip. A stupid accident that could have happened to anyone and was not related to illness. Just one of those things.

I found myself in the rehab institute a fourth time. Surely this was enough? Learning to walk after a broken hip is painful, but it must be done and I have done it. I've also returned to my full-time duties at the Sun-Times, and am pouring myself into the web site. This new blog is part of that effort. 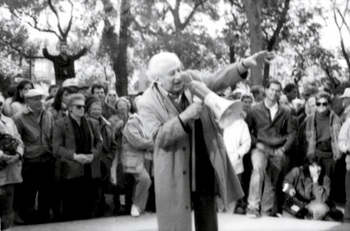 What influence has Studs had on my life during these years? He has simply continued to live--to talk, read, keep up with the news, see movies, attend events, use e-mail, listen, visit--and write. It is melancholy fact that in the last three years Studs has visited me in the hospital more times than I have visited him. But let me tell you about visiting Studs three days after he had open-heart surgery a few years ago. I expected to find a sick man. I found Studs sitting up in bed, surrounded by books and papers, receiving friends. The author Garry Wills appeared at his door. Studs had just finished reading his new book. He was filled with questions.

In recent years Studs has had open-heart surgery, and broken his own bones ("I was walking downstairs carrying a drink in one hand and a book in the other. Don't try that after 90.") But he has never, ever, not in the slightest, degree, retired. He published Touch and Go: A Memoir in November 2007, but a memoir could never close the book on this life. In fact, it was his second memoir, after Talking to Myself. (1977).

The lesson Studs has taught me is that your life is over when you stop living it. If you can truly "retire," you had a job, but not an occupation. Observing people like Studs and the author Paul Theroux, and the great sports writer William Nack, and directors like Robert Altman and Sidney Lumet, I have seen those whose lifelong occupations absorb them, and who are not merely maintaining, but growing. How astonishing it was to learn that Altman made great films after having a heart transplant! Nack, having "retired" from Sports Illustrated, has co-produced the film "Ruffian" for cable TV, based on his book about the great filly. He is an on-air talent for ESPN, and is now one of the producers of a film based on his book Secretariat: the Making of a Champion. For the first time in his life, he has an agent. His book My Turf has a story in it that has made grown people cry. I know. 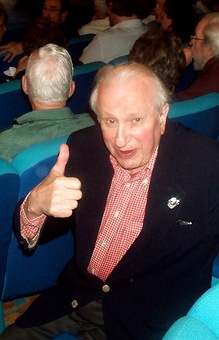 Theroux continues among the great writers of fiction, and remains a voracious reader. He lives with his wife Sheila Donnelly, a travel agent, on Ohau. It makes perfect sense for him to be married to a travel agent, since Theroux arguably has seen more of this planet's surface at ground-level than anyone else in history, and written about his adventures in famous books about travel. His wanderings continue. We met at the Hawaii Film Festival, began talking, and have kept talked ever since--about books, mostly.

It is such a relief to find someone who has read widely among authors you can't discuss with anybody else. We plowed through George Gissing and on to Mrs. Gaskell. Theroux continues to be curious. Not long ago he wrote a long and much-discussed essay for the Times (of London) Literary Supplement, seriously comparing the work of Albert Camus and Georges Simenon. He thinks Simenon, the Belgian author of about 400 novels, mostly about policemen, criminal, and crime itself, deserves comparison with Camus. I agree. But that's another blog entry.

Like Studs himself, I'm free associating myself away from where I was pointed and toward where my curiosity leads me. That's how he works, too. The point is Studs. Among his books is one about this very subject: Working: People Talk About What They Do All Day and How They Feel About What They Do. It became a Broadway musical. And there are The Good War: An Oral History of World War II and Hard Times: An Oral History of the Great Depression. These books set down eye-witness, first person accounts of eras in recent history that are already fading in the rear-view mirror.

One reason Terkel gets people to talk so openly with him is that he's not an academic or a cross-examiner. He comes across as this guy sitting down with you to have a good, long talk. Pick up one of his books, and now you're sitting next to the guy. You can't stop reading. Studs has an interviewing technique I admire: He combines astonishment with curiosity. He can't believe his ears. He repeats with enthusiasm what his subject just said, and the subject invariably continues and expands and wants to make his own story better. So many people have great stories, if only they could find an audience. It's curious, how only two of Studs' books are technically about himself, but in a way they're all about himself. Reading a novel, we may identify with one of the characters. Reading Studs, we identify with him--with the questions. Through his example, we become inquiring minds. And his subjects range widely. Look at his book Will the Circle Be Unbroken: Reflections on Death, Rebirth, and Hunger for a Faith. He provides not New Age malarkey, but real people having real thoughts about their real lives, and the inevitability of their own real deaths. Some people never articulate such thoughts to themselves, but they should, and in reading the book you are invited to turn inward and interview yourself. 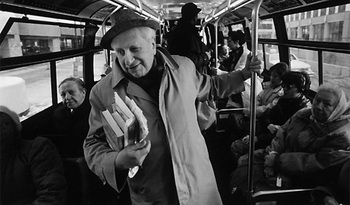 Studs was married for 60 years to a beautiful woman named Ida, who stood by him in the good times (he starred on one of the first sitcoms in network history) and the bad (he lost that job because of the blacklist). He was envious that her FBI file was thicker than his own. When Ida grew older, she refused to use a cane, "because I fall so gracefully." Her death in 1999 inspired him to write Will the Circle Be Unbroken? In his introduction, he remembers her last words to him, as she was wheeled into the O.R. for heart surgery: "Louis, what have you gotten me into now?"

Studs has gotten a limitless number of people into things. I am one of them. He has taught me that if I break my other hip next week, I will simply learn to walk again, and continue do what engages me the most, which is to write about movies. Life might have taken me in many other directions, but this is the one given me, and if I stop following it, I will have lost my way.

True, after all that surgery, I still lack the power of speech. And after all those interviews, Studs is now, in his own words, "Deaf as a post." But I can still write about movies, and thanks to "a nifty little thing-a-ma-jig" device hooked to his hearing aids, Studs can still hear people and write about what they say. You hear about people retiring and then dying a month later, maybe because their life has lost its purpose for them. The lesson Studs teaches me every day is that to live is to live is to live.

The celebration on Studs' 95th birthday .

His longtime friend Andrew Patner in conversation with Studs, 2004